…and not get hung up on what you hear.

The revised, slimmer, lighter version of PlayStation Vita hit shelves this week. It’s been out in Japan since October of last year, and now we’re finally getting ours in a Borderlands 2 hardware bundle (which also includes 8GB PS Vita memory, all for $199).

There are plenty of portable-playing gamers on the fence over this new Vita model, so I thought I’d weigh in as a user and fan. I’m not necessarily trying to sell you on these. I mean, it’s not like Sony gives me a cut or anything. I just want to go against some of the criticisms I’ve heard and explain that I think the slim Vita is pretty great.

This piece won’t cover why you should or shouldn’t get a Vita. Because really?

Maybe we’ll have that talk later.

The Sony line is that the new Vita is 20 percent slimmer and 15 percent lighter, but numbers can’t tell you how it feels to use. I can — it feels great. Holding any gaming portable in your hands and looking down on it won’t have you hung up on system weight so much. You’ll likely end up lap resting anyway, regardless of weight. But the Vita screen is big and pretty (more on this later) and you should put it up to your face to get a better look.

Fellow in-the-face portable gamers will really, really appreciate how much lighter the new Vita is. I’ve always appreciated picking up my Vita after finishing a 3DS game as it weighs 3 ounces less than Nintendo’s unit, but the new Vita is even lighter at 7.7 ounces. It’s so light that it almost feels weird at first, like you suddenly have more arm muscles.

If you play Vita games in bed or in the bath (do at your own risk), you’ll appreciate the weight change even more.

Finally, one-hand holding is now much easier with the reduced weight. Games that have you holding with one hand while pointing with the other are less likely to give you hand fatigue.

The new weight and thinner profile are a big difference for me. It means longer play sessions, less fatigue, and ultimately more enjoyment. 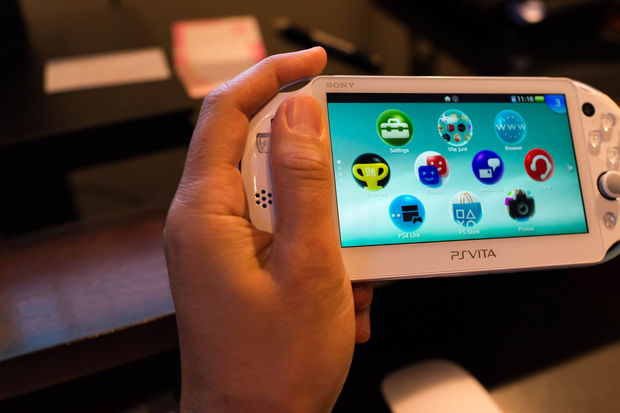 Much more comfortable to hold

Naturally, comfort level ties into the reduced weight and thinner build. For me, the way they’ve rounded the system out and shaved down the sharp corners made a big difference. The cut-ins near the shoulder buttons and strap loops on the original Vita were pretty sharp. While not enough to hurt you, they do make themselves known after hours of play. I’m glad they’re gone. Plus, the round reworking of the case looks better.

The the reduced thickness of the new Vita makes for a much better play experience, too. My index fingers (or ring fingers when using the L and R buttons) wrap around the top sides and fall into the rear grooves perfectly when I pick the new Vita up. No awkward rear touchpad slipping, either. Really, everything falls into place nicely — thumbs, index fingers, and palms. It feels totally natural for the first time.

Comfort level is the biggest improvement with this change, which is great as I’m always playing a Vita game these days. 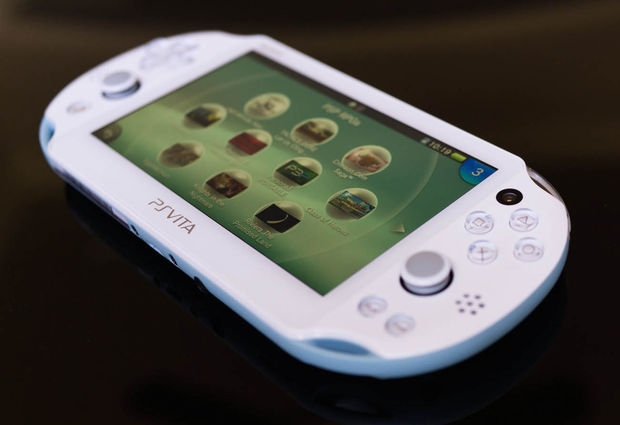 The oval start, select, and PS buttons of the original are hard to press because they’re too small and too recessed into the system’s face. The new system has them slightly raised, fully rounded, and much easier to push. For those that play games like RPGs that use these buttons often, you’ll be happy to be done with those little oval things.

A Micro USB charging cable replaces Sony’s proprietary one, making my life much more simple. That’s one less cable/adapter to have to carry around and/or keep in my home docking station. 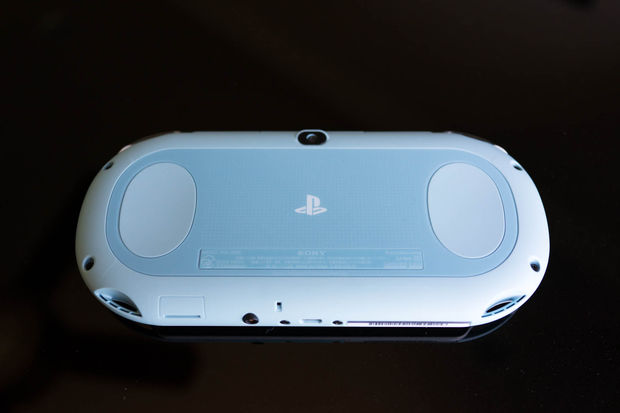 The new Vita has 1GB of built-in memory, which means that you don’t really have to buy a Vita memory card. I mean, you should. But you could get away without if you really wanted to.

The new game slot cover is softer and easier to get into.

The rear touchpad is slightly smaller now, which is a great thing in my book.

Battery life has supposedly improved due to a change in parts and power demands. Sony claims six hours, and while I’ve never timed it, that sounds about right. I have noticed that I’m playing longer before seeing the battery meter go down. 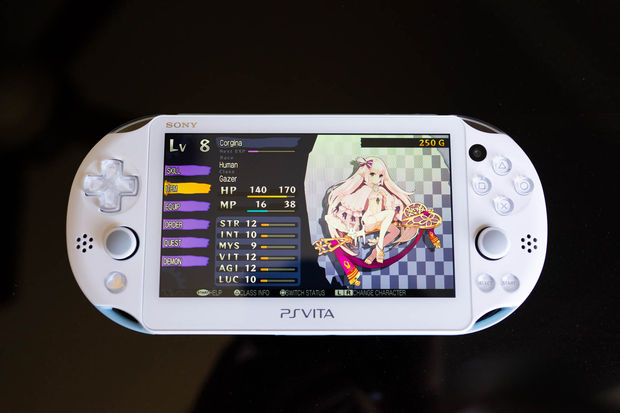 Let’s talk about that LCD screen

[cracks knuckles]Look, no one side-by-sides things for comparison’s sake. It just never happens outside of professional reviews, and even then it’s fairly rare. Earlier in my writing career I used to write about and review consumer technology. I still do sometimes. I learned early on that people will talk until they’re blue in the face about how their MP3 player sounds better than another, or their TV looks better than last year’s model, but they never bother to actually do the work to compare.

I have done the comparison between the old and new Vita screens. Yes, there is a difference between the old OLED and new LCD screen, with the former looking more punchy and rich. As the technologies stand now, all other things equal, OLED will always be better. But the new LCD screen looks great. Really great. It’s the same resolution (960 x 544) and they have the same pixel array, so you’re not losing anything. You’ll still get sharp graphics and clean text.

Screen blurring? I’ve heard complaints, but I have yet to have a problem with this.

I have absolutely no complaints about the new Vita’s LCD screen, even after hundreds of hours of play. To my eyes there are no faults. Don’t believe the folks that say the colors are washed out. They’re different, and that’s it. Not even worse — just different, and even then, just slightly. Again, the new screen looks great and there’s nothing there that will harm your gameplay experience.

Let’s put it this way: If the Vita launched with this LCD screen and we never knew of the OLED, you’d love it. Of course, a new Slim redesign with an OLED screen would have been great.

If you’re a diehard videophile and need only the richest colors and darkest blacks, I understand –stick with the original. But, again, the new LCD is nice, and I think you’ll like it a lot.

So you should get it!

I don’t even count the screen change as a tick in the negative box. It’s not as nice as the original screen, but it’s still great. The rest, though? Come on! The new Vita is lighter, sleeker, easier to hold, more comfortable to play, has better buttons, a better charger port, and looks great to boot.

The bottom line is it that the redesign made me love a game system I already loved even more. Don’t let the talk scare you off.

And while you’re feeling brave, think about importing one of the lovely Japanese color options, as the Vita 2000 is still region-free.