Just before E3, a hands-off preview of The Dark Pictures Anthology: House of Ashes

Supermassive Games is finishing up House of Ashes, the third horror-adventure game in The Dark Pictures Anthology this year, and while I was a little late to Man of Medan, I’m hooked now. I want to play all of these games right when they come out, even if they can’t quite live up to the fan-favorite legacy of Until Dawn.

From a ghost ship labyrinth in Man of Medan to a foggy witch town fever dream in Little Hope, there’s always something out there slinking around in this spooky character-choice-driven series. In the next standalone chapter, House of Ashes, we’ll be stalked by an “inhuman enemy threat” in a buried temple.

Surprisingly, the game is set in Iraq in 2003 — the United States is looking for chemical weapons, and this can only end badly. But while the conflict rages above ground, something ancient stirs below. 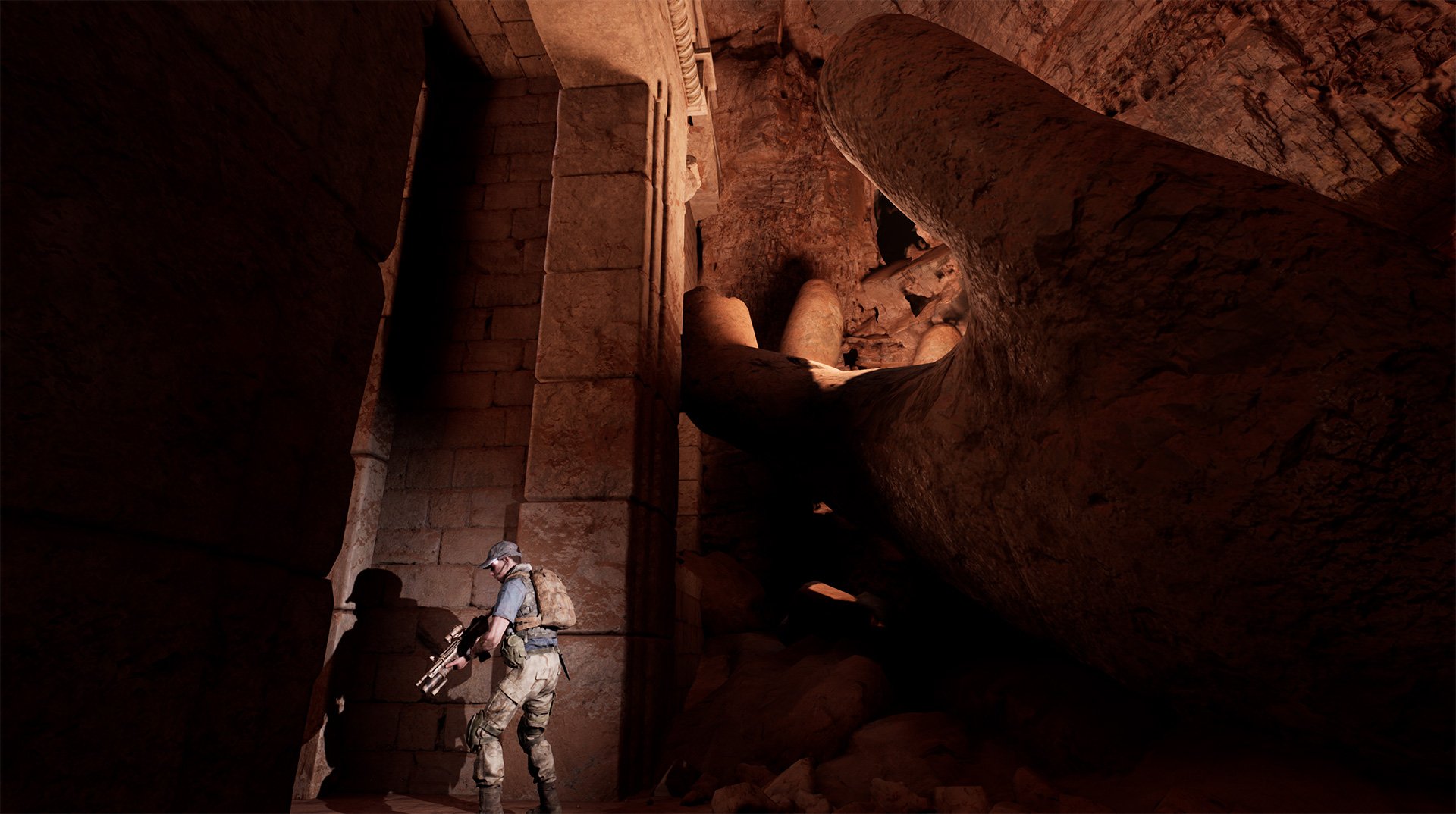 I got to see a hands-off preview of House of Ashes this week, just before the chaos of E3.

Like the other Dark Pictures games, this one has “some basis in a real-world fact or legend,” but game director Will Doyle says that they’re “always trying to find new ways to frighten [players].”

Without going through House of Ashes‘ entire setup beat-by-beat, let’s just say an earthquake has stranded our crew of survivors in a temple built for the gods that dates back to 2250 BC during the reign of the Akkadian empire. Should I also mention that the name Pazuzu came up? Well… it did.

This time, our cast of characters includes the CIA’s Rachel King, who is played by Ashley Tisdale — the one and only — as well as two marines, a colonel, and an Iraqi officer. So there are once again five main playable protagonists to try and keep alive as they’re forced through the grinder for our entertainment.

One of the recurring themes driving their decisions will be whether to act like lone wolves or team up, despite clear trust issues. And there’s also the whole “trying not to lose your mind underground” angle. If you’ve seen movies like The Descent or As Above, So Below, you know the drill by now. Claustrophobic people don’t always act rationally — especially when blood-starved beasts are trailing them. 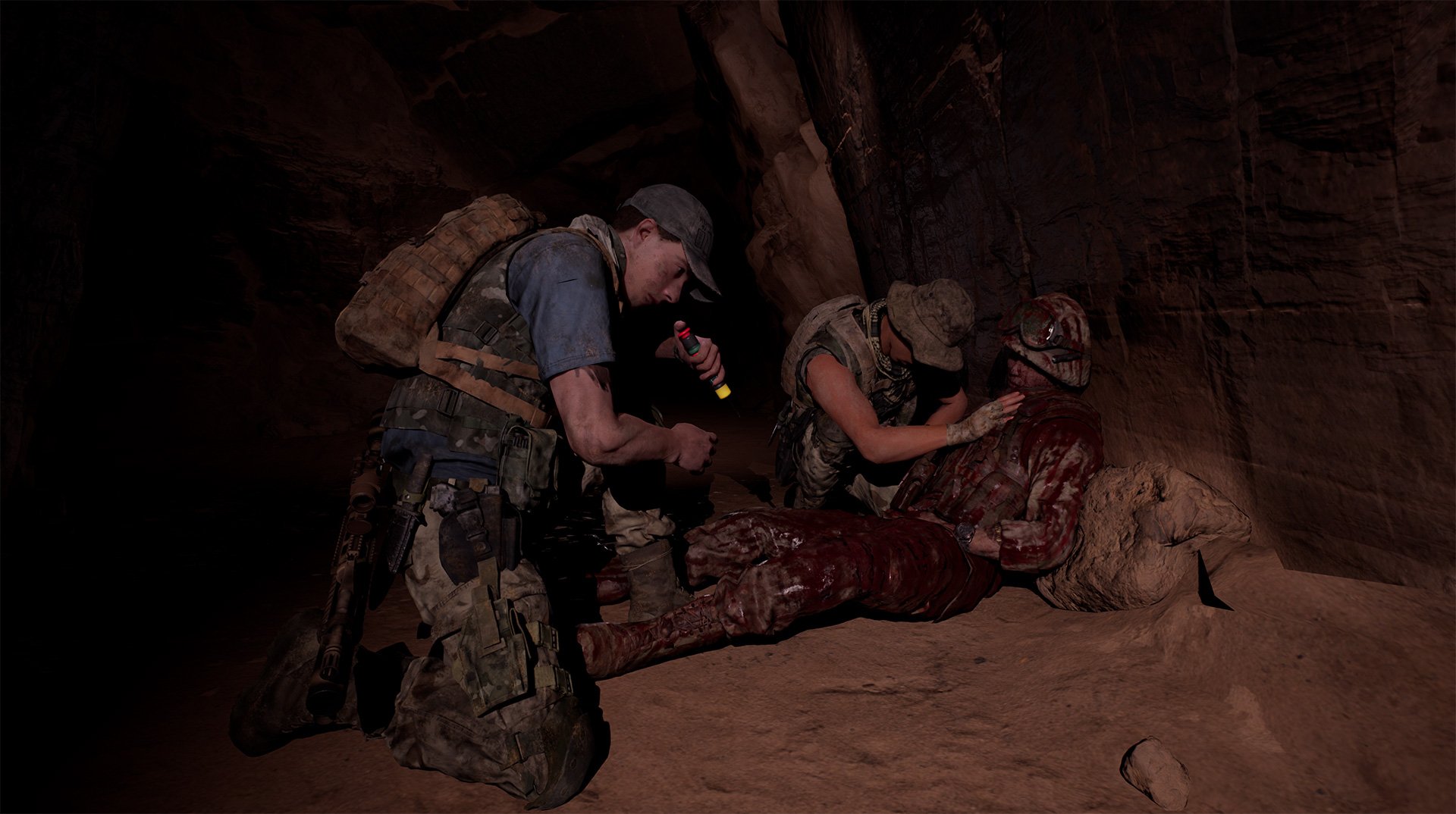 In an early story sequence, one Marine caught a glimpse of a monster and the other didn’t believe him even a little bit. Classic. I also saw a tense scene in which the duo scrambled to give a wounded soldier medical aid and shut him up before his screams alerted the horde. I didn’t quite catch the fast-moving creature, but it looked vaguely humanoid — again, The Descent was a major inspiration for this game, as are the classic movies Aliens and Predator, and the Lovecraft novella At The Mountains of Madness.

Supermassive assured us that “everyone can live” and “everyone can die.” In Until Dawn, quick-time events could immediately spell disaster for your poor teens, but these button-mashing prompts have gradually become more forgiving in The Dark Pictures Anthology. In House of Ashes, you’ll be able to determine the speed of QTEs. There are also three difficulty settings, according to the game’s director.

One of the biggest changes I noticed was the camera, which has moved even further away from the old fixed angles. You’ll have 360-degree control of the camera when you’re exploring the tunnels. My hope is that House of Ashes ratchets up the tension and dread of being hunted — and actually sticks with it.

It’s impossible to know for sure until we’ve seen the story through to the end, but for what it’s worth, Supermassive maintains that “the threat is very real” and there’s “a whole nest of them.”

While I think Little Hope had the better story setup (so far), House of Ashes has the ingredients to surpass it with a more primal, paranoia-inducing evil. Either way, I’ve always had a great time handing off the controller in the Movie Night couch co-op mode, which feels like a tradition at this point. I’m in!

I just wonder how many more Dark Pictures await us. Hopefully at least a couple more.