The newest evolution of racing games

The developers of The Crew have an unusual take on their new IP that features fast cars, deep customization, and miles and miles of the United States to traverse across and race within. Ivory Tower and Ubisoft Reflections insist that despite its trappings that would suggest an open world racing game in the same vein as the latest in the Need for Speed series or Forza Horizons, The Crew is actually an MMO RPG.

When first presented with this concept at a recent Ubisoft event, I was a little skeptical that a racing game could be classified as such, given that it doesn’t necessarily involve giant monsters and upgradeable weapons, and certainly bears no fantastical setting. However, after getting an hour long hands-on with the new game and witnessing the number of ways that this separates itself from its ilk, I could definitely see how it could be deserving of this different classification.

In The Crew, your vastly upgradeable and customizable car is your weapon. The giant monster you perpetually battle is the road, in several different kinds of events and spanning a seemingly large storyline across five enormous regions of the United States.

And like all MMO RPG’s, The Crew is so much better with friends.

Previews so far have shown that the “world” for The Crew is incredibly vast, as it spans across the entire continental United States. During a small presentation, we were shown the actual, virtual space of their version of the United States easily dwarfs many other open world games. To put it into perspective, the entirety of Red Dead Redemption fit easily inside one or two states. Their virtual version of the United States includes five regions, such as the West Coast, the South, and a mountain region that includes the Rockies.

Importantly, virtual world space is worthless if it’s not implemented in a way that engages the player, especially in a vehicular game with miles of scenery (Fuel comes to mind as one failed example.) Fortunately, the developers of The Crew are making sure that your mileage matters. When in the game’s free roam mode, you can easily access an overhead map that is pretty much like looking at a Google maps version of the virtual United States. You can even zoom down close and see terrain, individual buildings, and cars on the road. When you zoom out, hundreds of little symbols appear all over — on just about every area of the map. These symbols represent varied missions, short skill challenges, and collectables.

The first race I had a chance to check out took place in Detroit, and included a few key shortcuts, including one that cut along a train track and returned to the road just as a train came to nearly clip my car. The race wound through an old factory ground, and mostly on a dirt road. I first played it solo against AI opponents, and then played with my “crew” of other journalists, who really played dirty and soon pushed me into second place (and themselves into dead last, fortunately for me and unfortunately for our team.) I could quickly see how playing with a trusted friend or two would be a much more profitable affair. 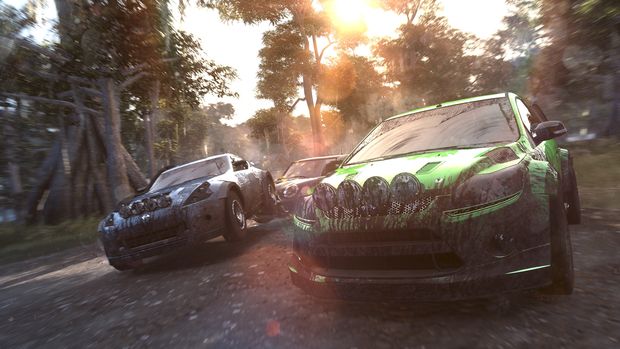 At any rate, upon completing the mission I was awarded a car part and sent it back to my garage, since it wasn’t at the same “level” of my car. The attainment of car parts upon completing missions and challenges is what makes The Crew have an RPG feel as you’re constantly upgrading the overall level of your car while juggling the stats of each part you’re given. This is especially important in terms of the chassis and engine, as every part you gain for those respective vehicle sections will help improve the overall speed and durability of your car. Usually, a gold part of a lower level might actually give you a better boost than a bronze part of the level you’re currently at.

The race in Detroit was a more standard race, though soon after completing it I was introduced to the other “missions” that varied the gameplay quite a bit. One mission that made me nostalgic for Rockstar’s Smuggler’s Run involved chasing down an off-road vehicle over scenic hills and dunes. The game automatically switched my vehicle to a more off-road-friendly (Raid) vehicle in order to keep up in the race.

Another mission involved a checkpoint race where the police caught on and forced me to evade their presence and road blocks as I sped across highways. A couple of the missions I played seemed to be for the sole purpose of advancing the storyline, such as one where I was tasked to bring a character to a specific location within the time limit. After completing this particular mission, I was given a cutscene that continued the whole “illegal street racer taking on the United States” storyline that The Crew seems to be going for. The story itself doesn’t seem yet to be entirely memorable, but the gameplay that leads into cutscenes is certainly solid. Granted, I was only given a brief taste of the actual underlying story of the game, though no one I know plays a racing game for a unique and engaging story. It’s all about the adrenaline. 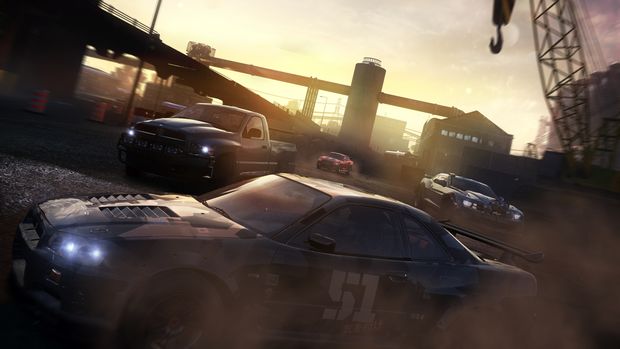 Driving from mission to mission could get boring easily if you were forced to just look at the pretty scenery. In The Crew, you’re likely to encounter several skill challenges along the way. These are events that are triggered simply by driving through them at spots along the map. Some skill challenges task you with careful driving, forcing you to smash through small glass barriers placed closely together and leading you off the beaten track, while others demand you to speed through a certain area of the map while avoiding traffic collisions and obstructions along the way. Interestingly, time of day can really matter for both challenges and missions, as the flow of traffic in a given area changes during certain points of the day, such as during evening and morning rush hours. Although I didn’t get a chance to see it, weather such as rain or snow can also play a factor, especially in regions like the Rockies that face heavy snowfall.

In terms of online gameplay, at any given time you’ll be playing with seven other players, and three of those other players can be your constant crew. The game’s server will host eight players in near vicinity while also showing all other players on an overhead map. As players drift in and out of your region, they also disappear from your server, so that gameplay is constantly fluid and fun. Of course, this changes if you’re rolling with your crew, who stay on the same persistent server with you.

Your crew is also an important component of the game, as you can roam around with them or take on any challenge or mission at any time, and you all benefit from winning. The crew leader usually chooses which events you’ll all be playing, and notifications appear that allow you to immediately fast travel to the location where everyone is to race. If you’re not the crew leader, you can still run an event by the leader to approve so that everyone can have the option to play the missions they want to play. 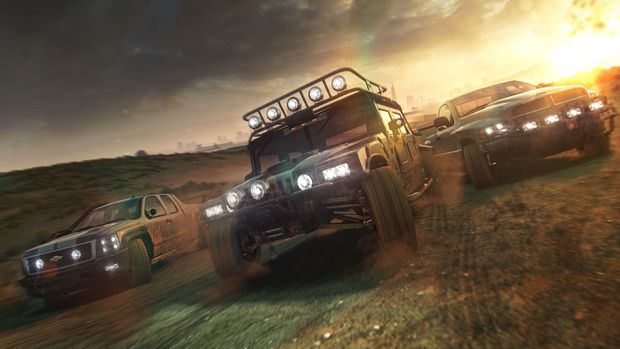 The vehicles themselves are an incredibly enjoyable part of The Crew, as they should be. At your garage you can apply all sorts of performance and cosmetic changes, including decals, paint jobs, and racing stripes. Of course, some licensed vehicles limit your use of these cosmetic “upgrades” — so you’ll never see pretty pink butterfly stickers plastered all over an Aston Martin, for example. For shame.

As you apply upgrades, you’re able to take your car porn to an entirely new level. At any time during your customization process, you can manually run the car and steer in “demo” mode. The coolest aspect of this is that if you’re working on the engine, the car strips away the outer elements and shows you only the parts of the engine you’re working on, and you can actually watch the pistons working away. This is also a great educational tool if you’re not a car buff, as it gives actual meaning to different car parts — especially where they are and what they do within the car.

The best part of the cars in my personal opinion is that the developers were thoughtful enough to add a realistic cockpit view, and it’s quite nice to use as you race or roam freely around. Some might remember my contentions with a certain game for taking away this feature from its original incarnation. When done well, cockpit view is such a great way to further immerse the player, and I can imagine it becoming a standard feature of all racers as we wade into VR territory. For me, if a racing game allows for a good cockpit view, that’s the only way I’ll race.

A few other features include “collision tolerance” that keeps the game from ruining your experience in traffic so that clipping another vehicle doesn’t take down your car, and damage modeling that smashes up the car in realistic detail. I do have to note that in the version of the game I played, there were some collision glitches that caused another car to go spinning off erratically, and graphically the game is still needing a bit of polish as I noticed some pop-in and a couple of ugly textures here and there. However, one thing PlayStation 4 owners might be happy about is that reportedly, anti-aliasing will be used in that version of the game, making for a possibly prettier and smoother version over the Xbox One. 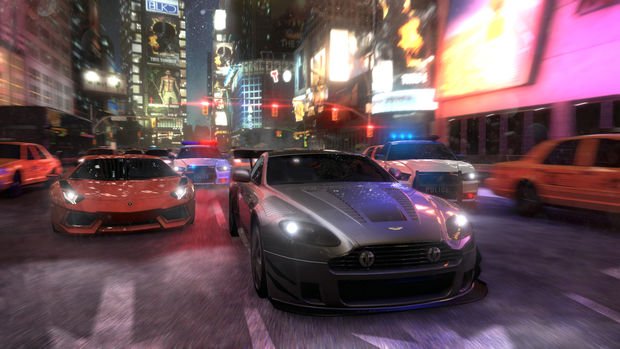 Small graphical concerns aside, I came away excited for the fall release of The Crew. I know I will spend several hours with the game, whether roaming around to simply explore iconic areas such as The Rockies or Las Vegas, taking on skill challenges and racing against other players or my own ghost, forming my own four person crew to take down others in races or skill challenges, or progressing through the missions of each region and taking on racers throughout the entire United States.

The Crew is truly shaping up to be the MMO RPG of racers, and it will possibly take up more than a hundred enjoyable hours of your time.