And over and over

Hyper Light Drifteris on the top of a lot of people’s lists of most anticipated games. For good reason, too. The quick-paced, action-RPG with a retro aesthetic looks like it’s going to be an absolute pleasure to play. If you’re not familiar with it, Alessandro wrote a preview of the build we saw at GDC.

Heart Machine has a new experience to show off for PAX East. Hyper Light Drifterhas a cooperative mode that we hadn’t gotten to try before. It’s basically a horde mode with endlessly spawning enemies. However, unlike most co-op endeavors, your partner could very well be more trouble than he’s worth. 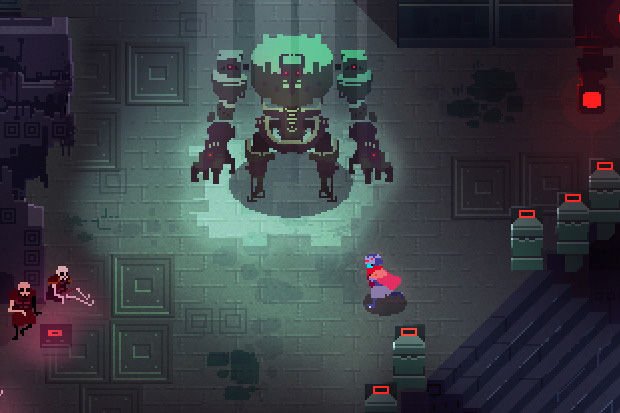 This is because the two players are tied together in an integral way. If the secondary player dies, he’ll keep respawning to the detriment of the first player. That’s because each respawn knocks a sizable chunk of health off of player one. When he dies, it’s game over. There’s no sort of system where one can go on without the other. If your buddy sucks, well, that’s your direct disadvantage.

If you had the slick idea that the weaker player could just stay out of the fray, that probably won’t happen either. Enemies spawn from all over the place, and the ones with ranged attacks will make this strategy particularly not feasible.

In all actuality, you probably won’t even notice if your partner’s bad, because you’ll both be too busy dying. Score is tracked based on the number of monsters killed, and rounds seem like they’ll go by lightning-quick. Talking with Heart Machine, they said that a score of fifty to one hundred is a solid round, and anything over one hundred is “venturing into high score territory.”

The reason that failure always feels imminent is because the enemies deal out surprisingly high damage. Everything could be cruising right along, and then you take a few unexpected hits and it’s all gone off the rails. Health can be picked up after enemies are disposed of, but it’s not generously handed out.

The best strategy to employ is to get into the thick of it and hope for the best. Speed is one of the essential elements, as the dash feature will have you zooming across the screen from enemy to enemy. Also, two special attacks can be equipped at a time that draw from a mana pool. You have freedom with these, as we saw a selection of about six that could be switched out on the fly.

But, chances are, within minutes, you’re going to be dead. Failure’s inevitable for even the most successful of runs. When that happens, you’ll have no one to blame but your co-op partner. And while it doesn’t seem like this mode will steal the show from the core game, it’s just one more thing to sweeten the pot and make us want Hyper Light Driftereven more.