It seems like every time I boot up Splatoon, Callie and Marie are telling me about something new added to the game. Weapon variations are added all the time, and just recently, a big 2.0 patch hit. New gear, new types of weapons, new music, and even map changes have completely altered the way the game is played.

Regardless of what was “held back” from the initial release, this continuous stream of updates goes a long way in making me stay interested in what Splatoonhas to offer. I’ll go on to check out the new weapons, and even if I don’t like them, I’ll play a few rounds because why not!

I love you Splatoon, don’t ever change. 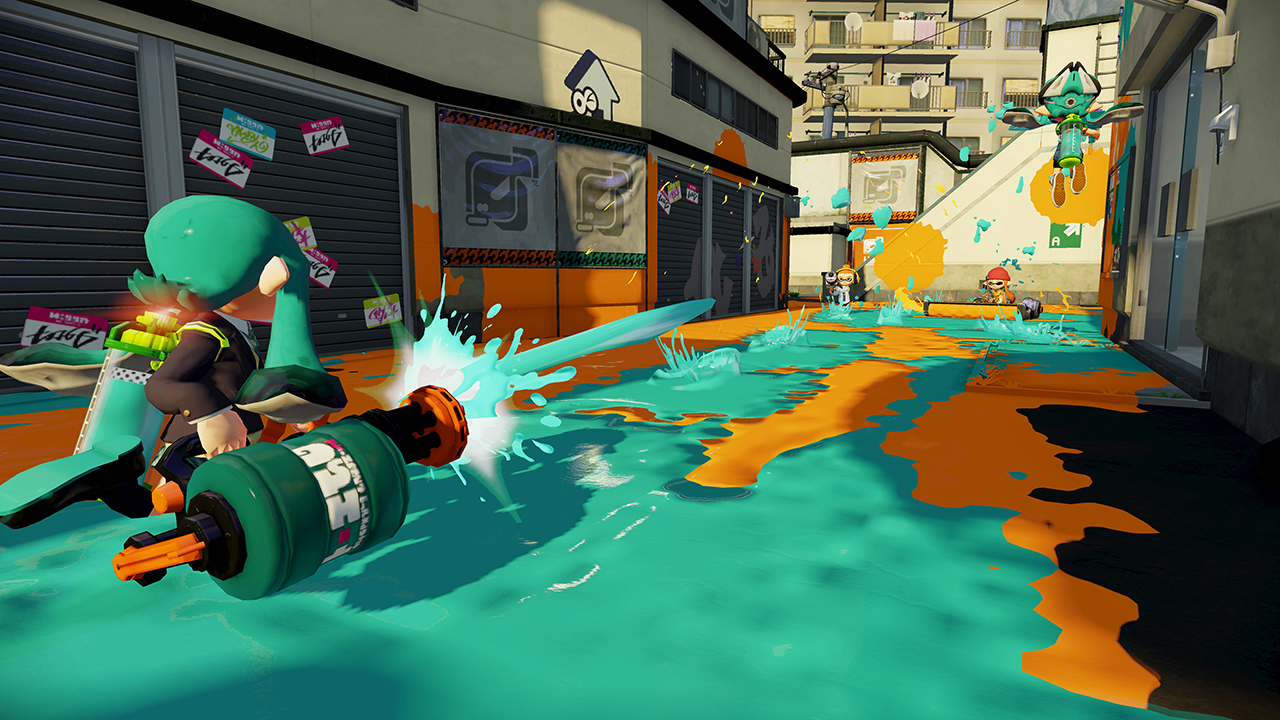 This is definitely one of my new go-to weapons. I still don’t feel completely comfortable while using it, but I can already see its potential. The Heavy Splatling needs to spin up before firing, but does not need to be fully spun up to begin firing. The longer the player spins up, the more shots will come out before stopping.

I’ve been using the Splatling as a more defensive weapon, similar to a Charger-type weapon. It’s natural to want to go on the offensive with it since it seems to beastly, but it’s just not as effective at in-your-face killing compared to most other weapons. However, using it to hold a location? That’s when it shines like a rainbow after a storm!

The Splash Wall is a great pairing for the Splatling, since it’s great to use as cover while charging up. It definitely helps to have some Sub Saver abilities on hand though, since the Splash Wall takes a ton of ink to deploy. 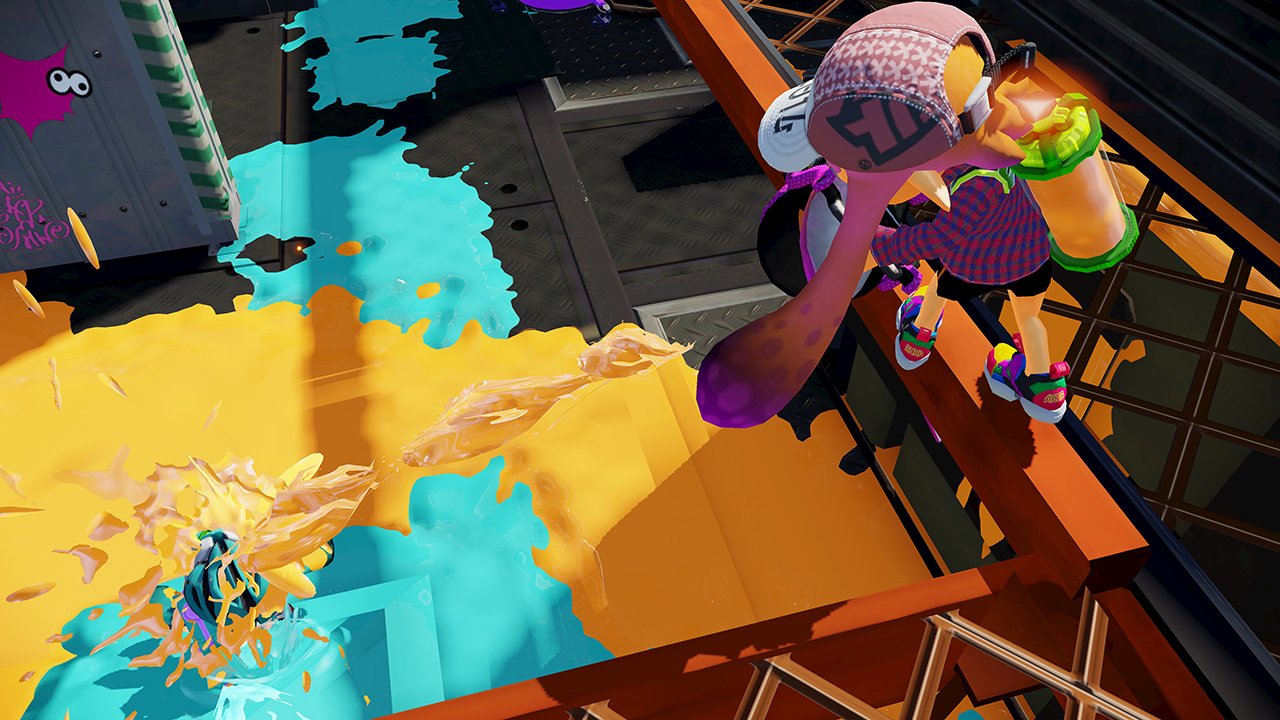 I thought the Slosher would be a new favorite of mine, considering I prefer to play up close and personal, but I just haven’t jived well with it. It takes two sloshes to kill, so springing up and surprising someone isn’t as effective as I’d like. Due to its solid range and accuracy, those who are effective with the Slosher are the ones who hang out at the edge of its range and are constantly moving around in squid form.

I’m also not a fan of the pairing of the Slosher with Burst Bombs. I feel as if they serve the same purpose. I can’t think of very many situations in which throwing a Burst Bomb would be better than just sloshing it up. Maybe one of you pro Slosher users can enlighten me…

First of all, let me just say how much I love the fact that the in-game music has in-game bands. It’s the dedication to things like this that make Splatoonso consistently awesome.

The new battle tune is great. I love the chiptune-y vibe from it. I’m also really glad to have more than one single music track for battles. The music that plays during the last 15-30 seconds of the original track was starting to make me go crazy…

So, I wasn’t completely sure why Urchin Underpass needed a makeover, but after playing its new incarnation, I’m happy to never ever go back. The new map is somuch more open than the original. The tree near the spawn apparently caused issue for players, so they moved them to the very center of the map. This is actually a brilliant decision, since these trees perfectly obfuscate part of the center of the map so snipers can’t just sit on the elevated sides and wreak havoc.

I didn’t mind the map before, but now Urchin Underpass is easily one of my favorites. I feel as if there are a lot of options at any given moment, which is really when Splatoonshines the most.

So they changed how Splatfest victories are calculated, and increased the victory part of the equation to count four times. We’ve since had a Splatfest, which was Marshmallows VS Hot dogs in North America. Marshmallows had a huge popularity lead (64/36), and Hot Dogs had a slight victory lead (48/52). The result was a close one at 256 to 244.

So, is this the solution? Personally, I think it’s a good idea. I don’t mind that popularity factors in to the equation. Victories are definitely important, and now are weighted way more heavily as a result. Although the change didn’t give team Hot dogs the victory, it didmake it very close, which is impressive considering the population gap. 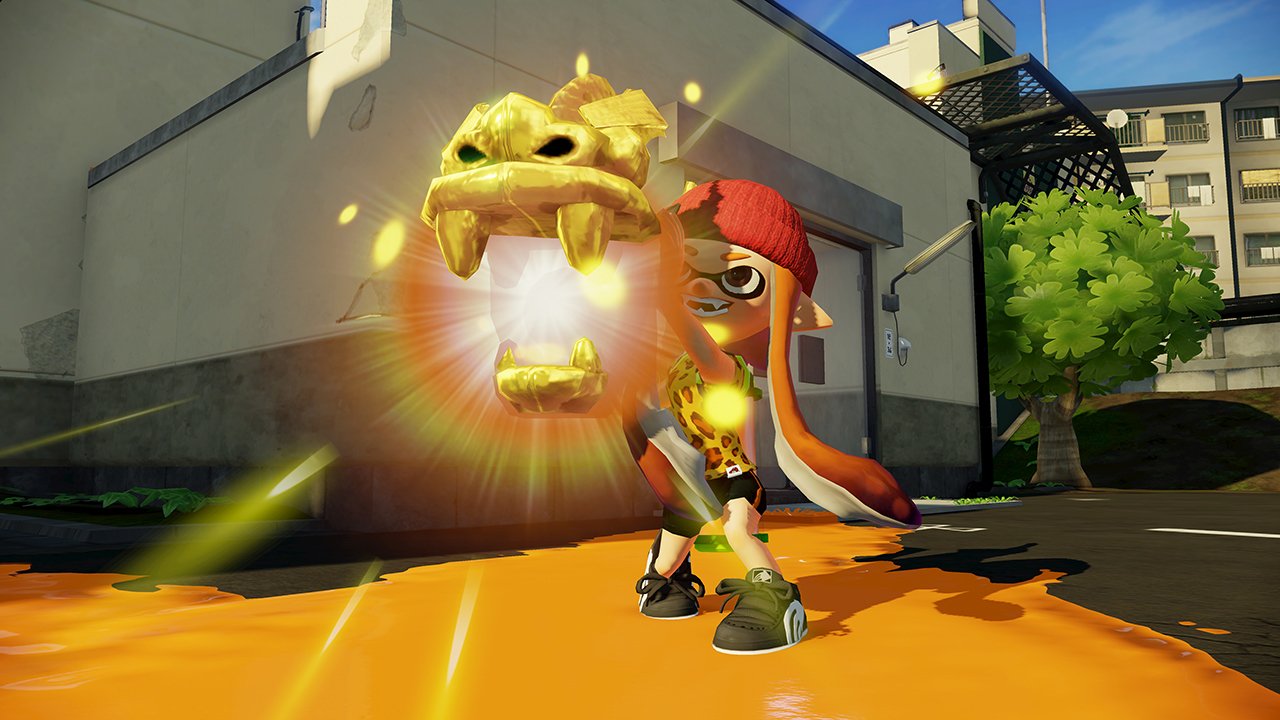 This isn’t part of the 2.0 patch, but did hit the game very recently. It’s a new mode that works a lot like capture the flag. There’s a weapon, called the Rainmaker, in the center of the map, and your goal is to bring it to your opponent’s base. The Rainmaker acts like an Inkzooka, but can be charged for a much bigger tornado blast. It’s a great addition to Ranked mode, but people clearly need some time to understand it. The weapon is enclosed within a shield when it is dropped, and the shield must be popped to pick it up.

My advice to all you squidkids out there: pay attention to your surroundings before you pop the shield! I average around 15 kills in this mode, simply because people are staring with tunnel vision at the Rainmaker, ignoring everything else. Teamwork is essential, since movement speed is lowered while holding the weapon. Moving with a squad to protect the Rainmaker feels great, similar to how protecting the payload cart feels in Team Fortress 2.

Okay, I think I’m caught up now with the major Splatoonupdates. Unless they just announced one while I was typing this….did they?