There have been rumors of a multiplayer component in Dragon Age:Inquisitionfor quite a while. BioWare has been keeping things under wraps for months after a small hint of its inclusion, and speculation was rampant as to what exactly it might entail.

After a recent visit to BioWare’s offices I had a chance to sit down with the multiplayer extensively, and I found myself slowly becoming addicted as the afternoon went on. In fact, I liked it far more than Mass Effect 3‘s co-op mode — so I have high hopes forInquisition.

So how does it work?

Simply put, it’s four-player co-op, but with more deliberate map designs that attempt to emulate a quest — in other words, it’s not just a wave-based horde mode that’s in every other game these days. Think Uncharted 3‘s story-like co-op and you’ll have a better idea of what I’m talking about.

Over the course of a few games we ran with a fairly balanced party of two tanks(Legionnaires), a ranged DPS (Archer), and a support-based caster (Keeper). As a tank it was my job to keep enemies off our team, while the archer picked off targets and the caster dealt damage while keeping up a magic-reducing shield on us. That’s not to say that you have to stick to your roles to a tee, as I often ran off doing my own thing while the archer took care of himself.

As level one adventurers we only had access to a few abilities, but even with just three powers (things like stuns and charges) and a standard attack combat was engaging and fun. The enemy variety kept things interesting as well, as we constantly had to adapt to faster or more damaging foes with new skills, and we subsequently talked strategy as a team while it was happening. In case you’re wondering, combo-based skills are in, and are more fun than ever with other players to coordinate with.

It’s not just a mindless slog from room to room either, as the dungeon we ran had a more twisted labyrinthine format. During each “run,” certain bonus doors can be opened by a lockpick skill (rogues) or by dispelling an enchantment on it (casters) — these routes often grant you treasure, but can also bypass rooms and lead to shortcuts. It’s not required by any means, but having a well balanced team will grant you certain bonuses beyond just spells and ability synergy. 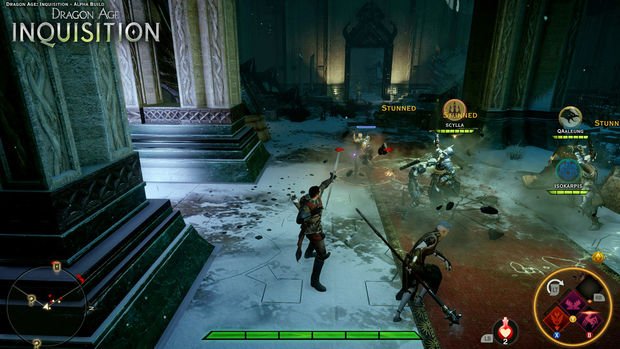 Having said that, you don’t have to worry about fighting over loot. Just like Diablo IIIloot is “instanced,” so you’ll get your fair share of items. Gold works the same way, and I was told that this is clearly the case to influence cooperative play. There is still some form of competition though by way of a scoring system. Any gold you earn can be used to buy new items (like potions), equipment, and craft new characters.

As you can tell by the following screen, there’s a decent amount of character options to choose from (I’m told around 12 or more will be available at launch). But instead of having static classes that just perform a job, BioWare has made them a little more interesting in Inquisition. Instead of merely having access to certain stats and powers, each “character” will give off a certain aura and personality. For instance the archer might be particularly cheeky, and the Legionnaire gets down to business. You can expect some amount of banter just like the core games, which is a nice feature for multiplayer.

If BioWare gates off progress and leans too heavily on its microtransaction system, I don’t know if Inquisition‘s multiplayer will take off. But given that they handled Mass Effect 3‘s progression systems fairly well, I’m excited to see what the future holds for Dragon Age co-op. The good news is based on what I’ve seen of the single-player so far, no resources have been “diverted” from the two separate development teams.

BioWare said that we can expect multiplayer to ship with several co-op maps, with more to come after launch.