Idle gaming is anything but

They did it. Someone finally made an “idle game” that stuck with me and now here I am, almost two weeks later, still obsessing. Clicker Heroes has succeeded where Cookie Clicker failed.

Granted, it’s the same basic premise: click on some things to accrue currency, then spend it on upgrades to make the money flow faster. It does not stop, not even when you close your browser because, shortly into playing, you’ll no longer need to actively click. But you will anyway.

Clicker Heroes is progress for the sake of progress. But knowing that — realizing you’re not having “fun” — doesn’t matter. Any feelings of regret that begin to bubble up over wasted time spent playing this silly game when you could be doing literally anything else will be overpowered by how good it feels to buy that new upgrade, or beat a certain boss who’s giving you trouble. 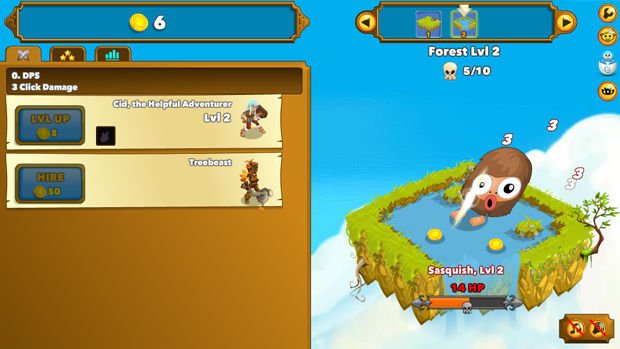 It starts off simply, as these games tend to — they’re smart about easing you in. Just click on that monster a few times to kill it, and you’ll be rewarded with a bit of gold. Feels good.

Then another monster appears, so you kill it too, and several more while you’re at it.

You can now afford to level up your character to increase how much damage you do per click, or you can save up for a pricier new hero, one who will automatically dish out damage.

You keep at this — slaying monsters, 10 at a time to open up access to the next level — until you reach a boss. These encounters run on a timer, and if you don’t kill the beast quickly enough, you’ll have to try again. So it’s back to the last level you go, taking down smaller enemies to earn gold to spend on level-ups or new heroes to increase your damage output.

With these purchases, you can now kill the boss, and look at that! You’re making progress again! Seeing those health bars deplete more rapidly with each new purchase feels terrific. Your foes are growing more resilient, sure, but that’s nothing you can’t overcome with more upgrades and heroes. All you need is time — some here, some there. But it adds up.

Now, it wasn’t until I had most of the abilities unlocked that my obsession spiraled out of control. Abilities do things like increase your damage per second by 100 percent, perform 10 clicks per second automatically, or increase gold dropped by 100 percent. Most last for only 30 seconds and then require a recharge before you can use them again. Some need 10 minutes, others an hour. One ability has a painful eight-hour cooldown. These make it so you’re always checking in.

It got to the point where I’d set myself up on an ideal level for gold farming each night, then wake up the next morning and leap out of bed like a kid on Christmas morning to activate every ability at once. Doing so will often help you overcome a particularly tough boss and reach the next set of levels, which means substantially more gold. You always want to be moving up the ladder.

But, eventually, progress will slow to such a crawl that you’ll need to “Ascend,” which resets your game world but keeps certain elements in tact to make the journey that much quicker the next time. For some, this will be the point at which Clicker Heroes loses its grip. I envy those people. I almost lost interest — almost! — but came back to the game days later to find such a huge stockpile of gold that I couldn’t not spend it. And then it had its hooks in me again.

The first couple ascensions felt pretty good, admittedly. There’s this separate type of currency which acts as a huge boost to your damage-per-second output. It can also be spent on special characters, called Ancients, who have far-reaching passive abilities. But in order to spend said currency, known in-game as “Hero Souls,” you have to Ascend first. 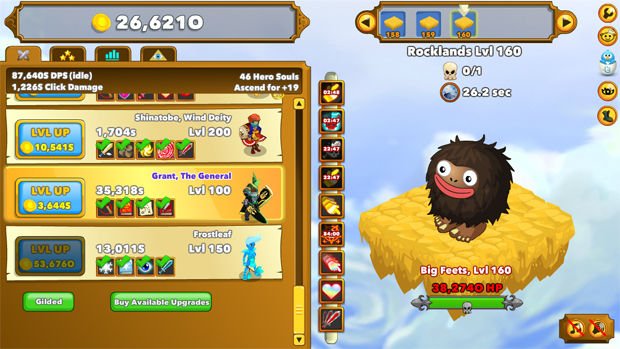 If you make it far enough into a world, your heroes can also become randomly “gilded,” which increases their damage as well. These things carry over into new games, damn it. Of course they do. So do achievements. Yes, Clicker Heroes has achievements, and yes, they boost your DPS.

It’s less interesting going through the same levels again, but with these buffs in place, you’ll soar through them. You’ll be able to buy things completely out of order, if you want. It’s chaos. And then, you’re back where you started — but in a fraction of the time. You topple that original hurdle and press on until you hit a new one. Better Ascend again for even more Hero Souls.

That’s where I’m at right now. I’ve ascended seven times, and I’m ready to do it again — I don’t have the patience to wait out the boss on level 160. I’m ready to bank a bunch of Hero Souls and kick its ass in the next world. Although, looking at the Clicker Heroes subreddit, I’ve only scratched the surface, which frightens me. Thankfully, that’s helping me lose interest.

This is a game that would be okay in moderation, but it’s designed to exploit the way our brains are wired and won’t let you play it that way. I’ve never seriously bothered with free-to-play gaming before — the scummier side of it, especially — but I can see how people fall into those similar traps. It’s almost unfathomable until it happens to you. They have my sympathy.

If you’re thinking of playing Clicker Heroes, I have one piece of advice: don’t. It’s the best/worst game I’ve gotten into this year and I just want to stop, already. Enough is enough. In writing this article — getting these thoughts out of my head — I’m one step closer to escaping.