That snake part was crystal clear, though

Minor confession to make: I haven’t played Bayonetta. Yeah, I hear it’s good, but I just never got around to it. It happens. Heading into a quick hands-on session with Bayonetta 2, I figured my inexperience wouldn’t matter much.

Wow, was I ever wrong. Now a few hours removed from the demo, my head’s still spinning from trying to discern exactly what the hell just happened.

I played chapter five, titled “Cathedral of Cascades,” which started off with me transforming into a snake and swimming to land. I was incredibly good at this part, probably because it was impossible to screw up. Being the rock solid reporter that I am, I inquired as to whether Bayonetta can turn into any other animals. 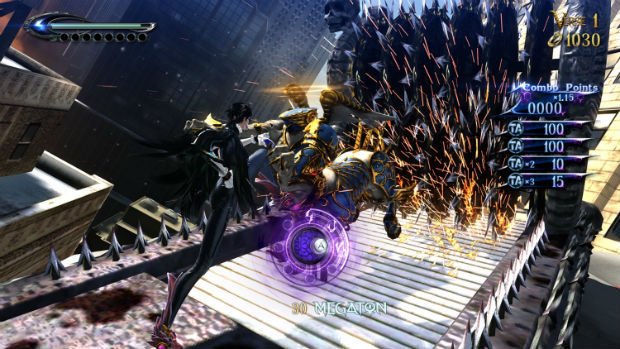 Did you know Bayonetta can transform into a fucking panther? Maybe I would’ve if I played the original, but seriously — a goddamn panther. Needless to say, the next couple minutes were blocked off for panther dashing. That line of people behind me? I didn’t care so much about them; they probably got lots of panther time in the first game.

Once that novelty wore off, I continued with the demo and things got significantly more convoluted. Combat? Yeah, I had no idea what I was doing. I eventually fell into a rhythm with the dodge button, and felt semi-competent despite the fact that I probably wasn’t. I managed to rack up gold statuses on a few sections. That euphoria vanished immediately when the Nintendo representative told me that there are two rankings above gold. So, it’s kind of a really fancy C-plus.

However, combat was the most intuitive thing in the world compared to the narrative. Cut scenes? They looked nice, but it might as well have been in another language for as little sense as it made to me. Nintendo gave me a whole list of things that I can’t mention in this preview, but it need not worry because I don’t have a clue what any of those words mean anyway.

My massive heaps of ignorance aside, I had a good time with Bayonetta 2. Combat can be supremely satisfying when the pieces fall into place. The plot? Maybe it’s good, I don’t know. But, don’t be concerned with all of that because you can transform into a sea snake and a panther. That’s all that really matters.

This wasn’t a very good preview.