Space is the place

Civilization: Beyond Earthisn’t just a missed opportunity for transmedia synergy by way of the family Smith’s After Earth. It’s a game about space. About space colonization, specifically, because the Earth is a goner (wonder how that happened).

Because of this space theme, we were brought out on an elementary school field trip to the Chabot Space & Science Center up in the bourgeois hills of Oakland (you know, where it’s not “scary”). We were given a brief tour of the facility and taught some things (I can’t make a high grade telescope by stitching together Ikea mirrors), thanks in part to the presence of actual sciencemanDr. Stephen Kane.

Kane was part of the team that discoveredKepler-186f, the 500-light-years-away, possibly-habitable-by-humans exoplanet. He also made a good joke about getting more space research funding by fabricating a new space race with China.

Anyways, after taking pictures of laminate Bill Nye cutouts and a weird little thief man that looks like Andy Dixon (maybe I’ll stop tweeting leg pictures long enough to tweet it at him eventually), I played the first 100 turns of Civilization: Beyond Earth.

Firaxis released the above first fifty minutes of Beyond Earthwith commentary fromFiraxis’ Pete Murray and David McDonough. It delves into setting up your Civgame, ending before a few turns have passed. There are a bunch of decisions to make early on, including picking your sponsor (affects bonuses you’ll get throughout your game), colonists (to reinforce your sponsor choice or to try and balance things out).

You can also choose from pre-determined planets geared for veteran Civilizationplayers — this definitely is quite a bit of “Civ 5in space” — or roll random planets of three categories: Terran (Earth-like — large swaths of sea and land), Protean (one ocean, one large landmass), and Atlantean (small, connected islands you can sail between on gondola to support the tourism economy).

Going Atlantean was an easy decision, but then I had to keep clicking away at the randomizer to get a planet name I liked. I saw “Nye,” a science name, but my finger was faster than my brain and I clicked again and lost it. I did the same for “Funk.” However, I needed to lay claim to planet Funk and so I cycled through all of the randomly generated planets until it came up again. 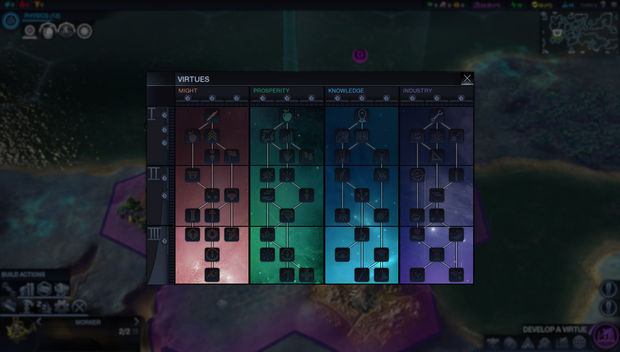 I landed on Funk and began my great conquest of getting ravaged by siege worms. There are three basic affinities to align yourself with. Harmony thinks you should adjust and adapt to alien ecosystems. Supremacy thinks you should conquer them. Purity just wants to have its own little slice of old earth. It’s more brute force than Supremacy, which turns to cybernetics and technology as humankind’s key to survival.

One hundred turns is not a lot of turns to play out in Civilization. I barely got any trade routes going and didn’t get to engage in much diplomacy beyond one gent that suggested we have open borders, to which I, aware that I would never reach his borders before my time expired, agreed to.

Still, Harmony might be my preferred route. It is not advisable to go after local alien wildlife. If you do, it will get angry and kill you. Even if you don’t, a Siege Worm might still decimate every single structure you’ve built before enough volleys of missiles from your city center shoos it off. Early on, you don’t have a lot of choice but to coexist, so leaning in on Harmony makes sense. Then again, all of the affinities can be pretty isolationist early on as you just focus on domestic infrastructure, save for sending explorers to excavate fallen satellites and other wreckage.

The biggest difference Beyond Earthhas over Civ 5is the sprawling tech web (42:08 in the above video), which groups generalized ideas in extending directions (and more specialized, resource intensive subsets below them). That and the bonus for upping Virtues across the board, rather than filling them out sequentially.

Also that you’re in space this time and don’t have to deal with Gandhi.