Forget Oprah, this is my favorite thing

Long ago, back when I was just a timid and naive elementary school student, my best friend and I used to pass the time in class designing levels. We both loved video games growing up. He introduced me to Final Fantasy and a few years before it was announced, we both came up with the idea for a fighting game consisting of nothing but Nintendo characters. I expect a check in the mail next week, Miyamoto.

These levels we designed weren’t for any game in particular. In fact, they would be nearly impossible to beat. They looked something like this: 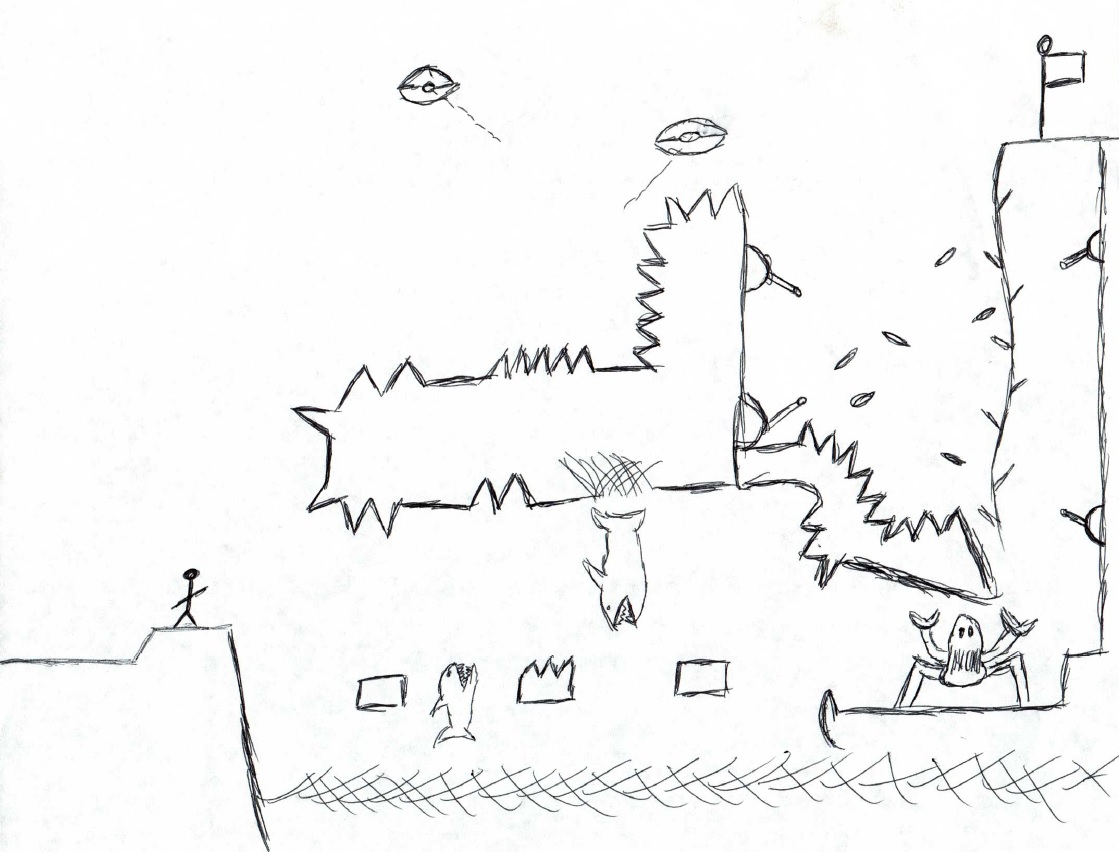 Yes, that’s a spider-Zoidberg and those are lava sharks. Boy, it really brought back memories drawing that thing up. The two of us would exchange our levels and each try to figure out how to reach the end, usually with the aid of some secret jetpack or grappling hook that we conveniently left out. I loved designing levels.

At an early age, I realized level design was an art, something that should not only be conquered, but also admired and studied. For years I studied level design every time I popped in Mario, Kirby, Sonic,or Mega Man. Last year, I was finally able to put those years of education to use with Super Mario Maker. Even if I wasn’t that good at it, I enjoyed having access a simple set of tools I could use to express myself and try my best to match the high standards set by the masters who came before me. Mario Makerreignited that design passion from my grade school years.

Over the past month, the fires of that passion have been stoked by Bloxels.

I was first introduced to Bloxels at the toy store I used to work for. We ordered a couple dozen of them and I secured one for myself before I left. Everything about it spoke to the designer I keep locked up inside me. The idea behind this Kickstarter-funded project is simple: use a grid to design levels, characters, enemies, objects and everything else you’d need to make a simple 2D platformer. Now that I’ve had some time with it, I think it’s something every young, budding game developer should have, because not only is it easy to use, but it also teaches lesson in hard work paying off.

Straight out of the box, I was creating characters and stages in minutes. The Bloxels board features a 13×13 grid and eight different color pieces. When designing characters, these colors create the details of your heroes and enemies. In level creation, the different colors represent different obstacles. Green are ground pieces, yellow is coin pieces, red is hazard pieces, blue is water and so on.After you build your level or character or asset, you take a picture of it using the camera on your smart device and it’s replicated in the free Bloxels app.

I used my iPhone 6 and Amazon Fire to see how it played between two very differently powered devices. While the Fire has a larger screen, I didn’t really realize how terrible its touch screen was until I was trying to create designs with it. I have fat fingers, but clearly, that wasn’t the problem as the iPhone was far more precise.

Once a picture is taken, there is an editor in the app that gives you more colors to work with to get the design exactly as you’d want it. With character design, you’ll create their idle, running and jumping animation. There is the option to make these extremely detailed with many different frames, but I kept mine simple as my art was pretty lousy. 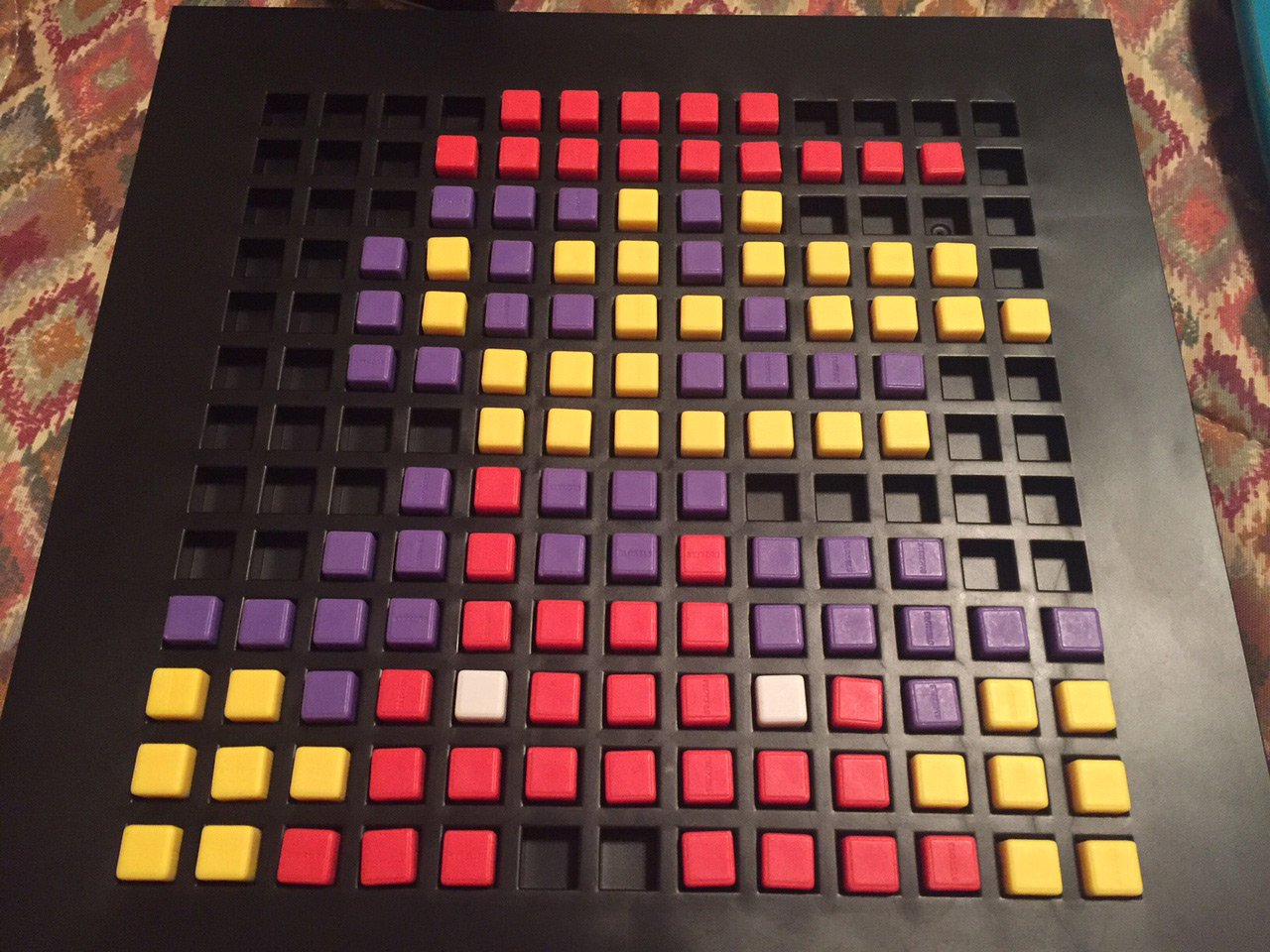 Because it is just a 13×13 grid, I wasn’t able to make exact replicas of popular video game characters, which was naturally the first thing I attempted when given the opportunity to make them. Even the original Mario proved to be too detailed for the grid. Giving up, I stuck with the many character ideas found in the Bloxels guide, however, I did attempt a de-make of the original Zero Suit Samus.

Character creation is simple and artistic people will no doubt have more success than I did, but level design is where you’ll find out if you truly have what it takes to make a game. Levels can be a maximum of 169 13×13 rooms. Rooms are designed with the Bloxels grid, and a handy map will help you move the rooms to exactly where you want them to be. When building rooms right next to one another, you can see the edges of adjacent rooms to allow you to line everything up. Once you’ve completed your design and taken a picture, you can start to fill it in with art assets. 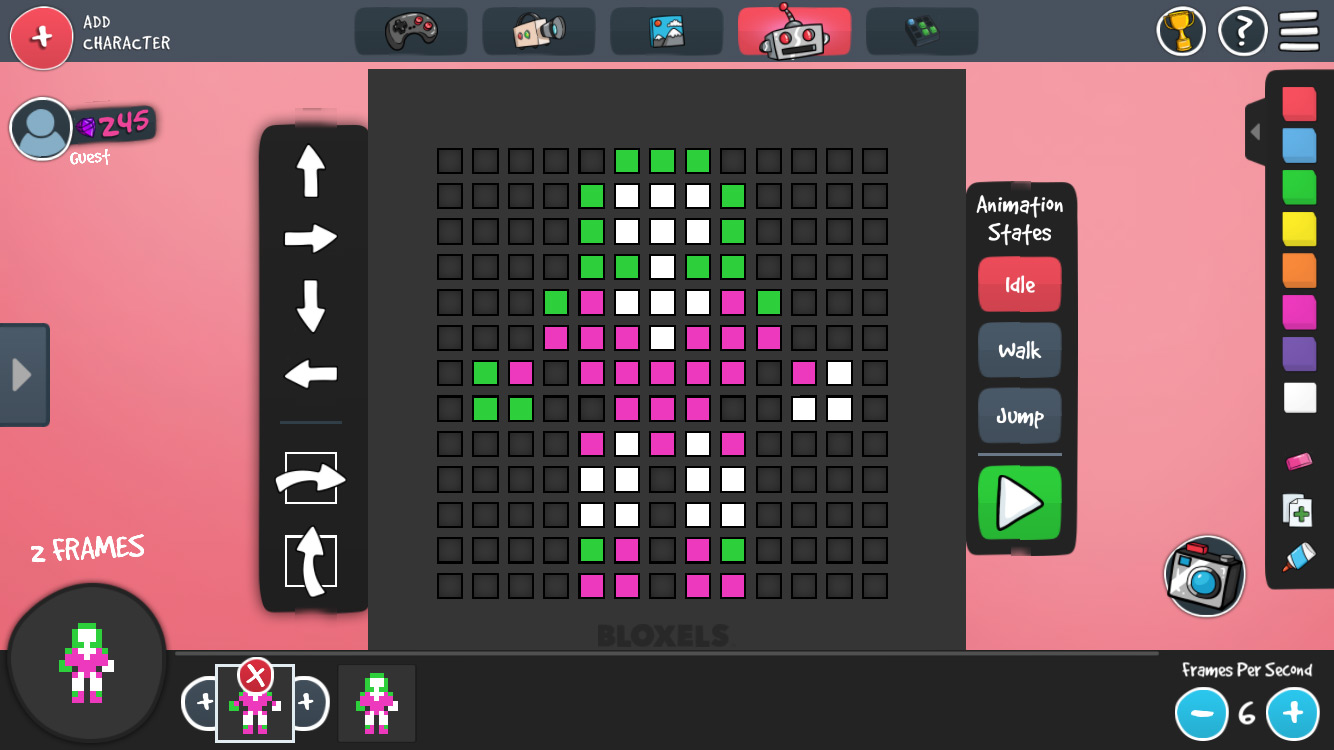 Assets, made with the grid, constitute basically everything in the game. Ground pieces, water pieces, backgrounds, enemies, coins – they’re all assets that can be made, and animated, by you. This was a time-consuming process, not least because of my complete lack of artistic vision. For several hours over a weekend, I designed a roaring fire, a shaky bridge, and a decaying pirate ship, all with the grid. Eventually, it became too much of a hassle for me to keep clearing the blocks out with each asset I made, so I would instead design all my assets directly in the app. Did they look good? Lord no, but it did go by a lot faster this way. I could have used the pre-made assets, but I wanted what I was doing to be unique, and unique requires time and effort.

The backgrounds can also be an arduous task. These are the same size as the entire map and you can only create them one grid square at a time. Want to make a blue sky with a few clouds? You better plan it out in advance because unless you’re creating clouds within the confines of a single grid, you’re going to need to design several connecting grids to make up your fluffy white clouds. For youngsters, who this product is obviously aimed at, this could be something that makes them give up. I spent a good couple of hours making a stormy sky and I wanted to quit several times during the process.

The app could be little more user-friendly. Some of the components aren’t explained that well and the camera wasn’t always able to accurately capture the image in the grid. In fact, my iPhone and Fire tablet wouldn’t work with the same lighting, so I had to move to different parts of the house to get it to work depending on the device I was using. 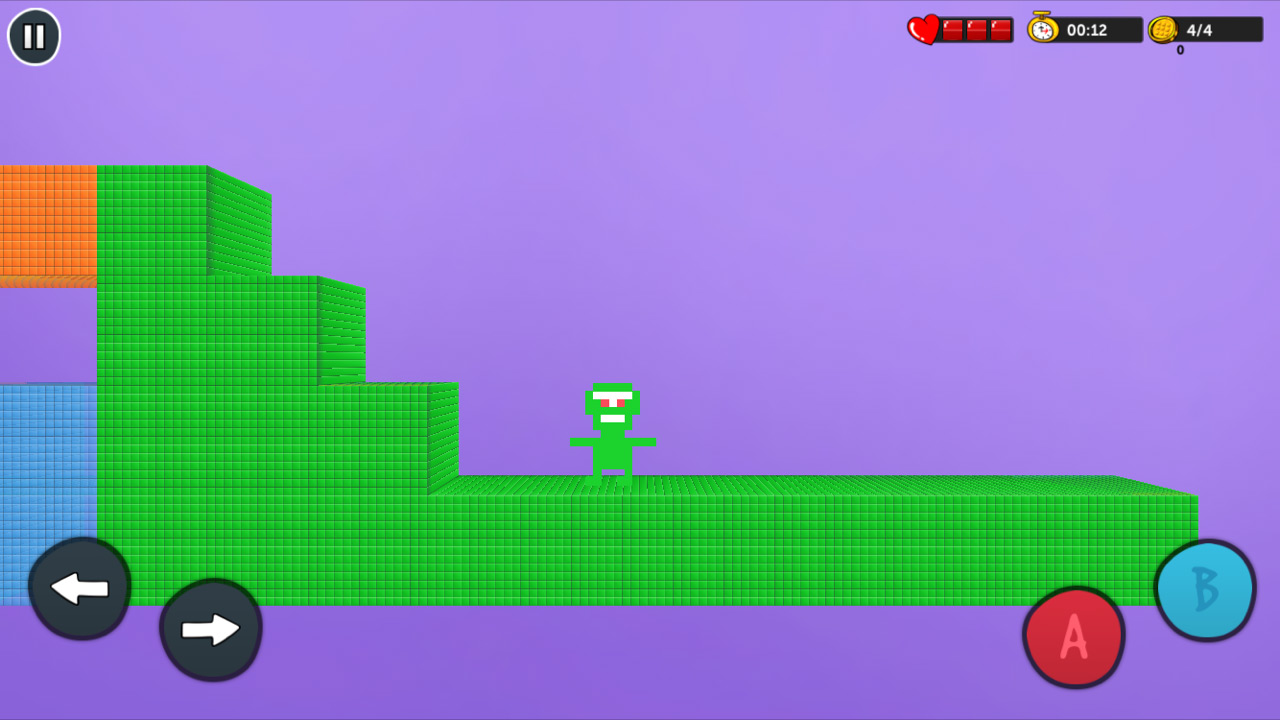 But none of that has got in the way of me enjoying and really utilizing this software. It’s truly something I wish was around when I was a kid because that little boy penciling impossible caverns while not paying attention in class could have been making actual games instead of just pretending to do so. You know, programming them or something because that kid sucked at art just as much as his adult self.

What I started a month ago, I am still working on. My level, my game, isn’t anywhere near completion. But once it is complete, I can upload it and any of my art assets onto the Infinity Wall, where you’ll find games and assets made by other designers. I’ve found various Pokemon, Minecraft characters, Spongebob Squarepants, Pac-Man sprites, Batman, and Deadpool. There are a lot of people out there who prove that a 13×13 grid isn’t restrictive, but an opportunity to show just how talented you are.

With everything I’ve seen and everything I can do with the tech, Bloxels is easily the best $50 I’ve spent in a long, long time.