At PAX Prime, I got my first and what could be only opportunity to try Upsilon Circuit.

You see, once it goes live, eight people will be able to play at any given time. That’s eight people, total. And the “permadeath” here is actually permanent. You lose? Your turn is done.

While everyone else watches, waiting for their coveted chance in the spotlight to hack away at monsters and explore, they can directly influence the direction the game takes. The audience has control to, say, spec out players’ skill trees, or spawn a deadly trap.

Legend of Dungeon creator Robot Loves Kitty is billing this as part online game show, part action-RPG. At PAX, I saw more of the latter than the former, but Upsilon Circuit‘s Max Headroom-esque digital host Ronny Raygon was set up on a nearby television to talk smack to attendees. He got into an argument with some kid about whose glasses were cooler.

Before you ask who would pay for something like this — for a chance, maybe, to play once — know that it’s going to be free. In speaking with Robot Loves Kitty’s Alix Stolzer, it sounds as if a large part of the monetization will be geared toward trolls or audience members who otherwise want to screw over the player characters, not help out. I told her that was a good idea.

It’s still early days for Upsilon Circuit and there are a lot of unknowns, but what was shown at PAX gave me confidence in this somewhat crazy, definitely ambitious project. If the game catches on and finds a stable audience, it’s going to be a fascinating experiment to take part in. 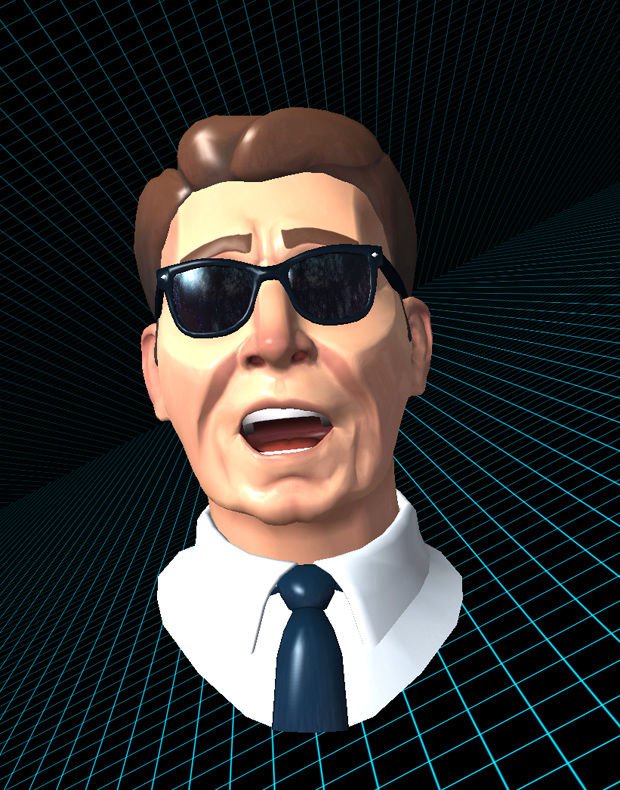 You can’t not l-l-l-love this guy.