Shulk would be sad

It’s hard to believe that the metroidvania genre nearly died a decade ago. With Konami and Nintendo basically moving on from the likes of Castlevania and Metroid, it fell on indie developers to continue the legacies that those series started. While lacking the brand recognition from both franchises, gamers have been inundated with metroidvania games in the years since. If you’ve been dying to relive the glory days of Samus Aran’s adventures, you have more than enough titles to pick from.

That doesn’t mean gamers would be opposed to seeing both of those franchises come back. Nintendo got the memo and released Metroid: Samus Returns in 2017, but Konami has sat on its IPs and done nothing to honor them. Possibly because of this indifference, Castlevania series producer Koji Igarashi left Konami in 2014 and began brainstorming ideas for how he could make a spiritual successor to the games.

This gave birth to Bloodstained: Ritual of the Night. After a majorly successful Kickstarter campaign in 2015, fans were elated to see what they perceived as a continuation of Castlevania come to life. Continuing on in the legacy of games set forth by Symphony of the Night, Bloodstained was set to be the glorious return to metroidvania gameplay that fans had been dying for.

While I won’t deny that Bloodstained feels remarkably similar to Igarashi’s past titles, something about the game hasn’t clicked with me. 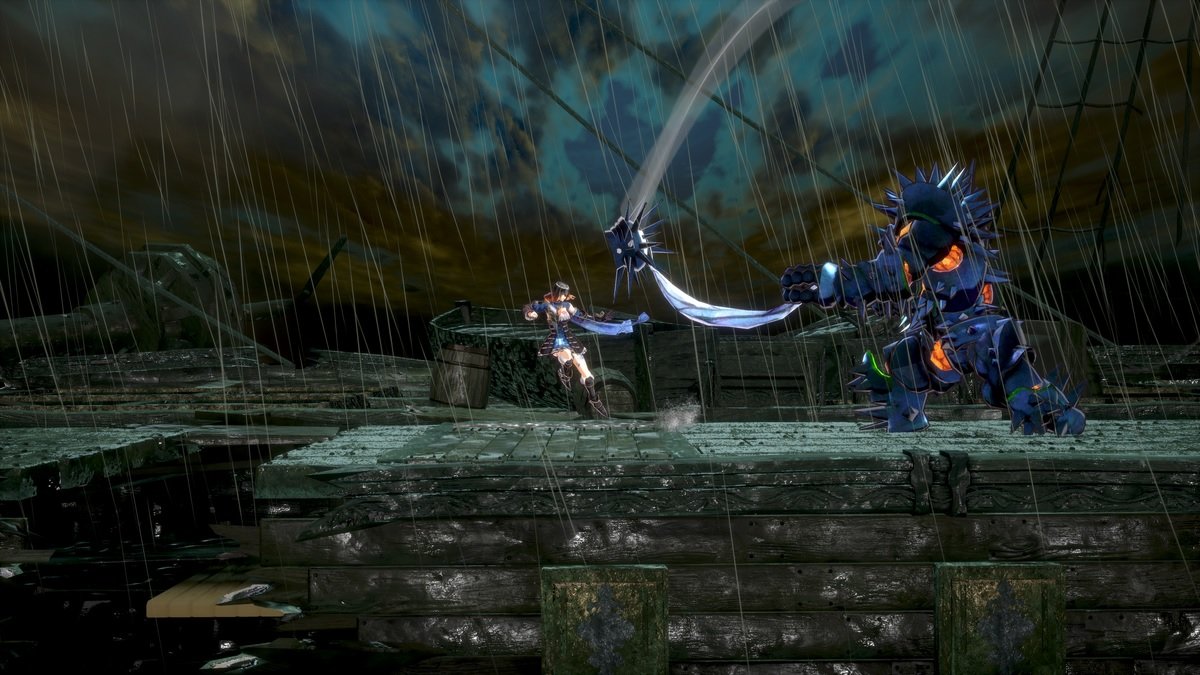 For PAX East and EXG Rezzed this year, developer ArtPlay created a demo that showed off basically everything you’d want to know about Bloodstained. There are multiple rooms to explore, a ton of items to collect, a bunch of different gear to try out, and a climactic boss fight. This is a vertical slice of Bloodstained that I wouldn’t be surprised was the initial pitch from Igarashi.

The demo begins somewhere in the middle of the castle that main character Miriam will be exploring. With basically no indication of where to go next, I simply picked a direction and started walking. The default weapon that Miriam had equipped was a rapier, so I took some swings to figure out how it moved. It’s not an exact replica of the swords that Alucard used in Symphony of the Night, but it has similar speed and range.

Being somewhat far into the game, Miriam had a bunch of extra moves at her disposal. I suppose the best comparison would be to say she controls something like Richter combined with Alucard. Miriam can slide on the ground, back dash, and high jump, as well as conjure up familiars and lob secondary items. It’s all incredibly familiar to me from my experience with previous Castlevania games. 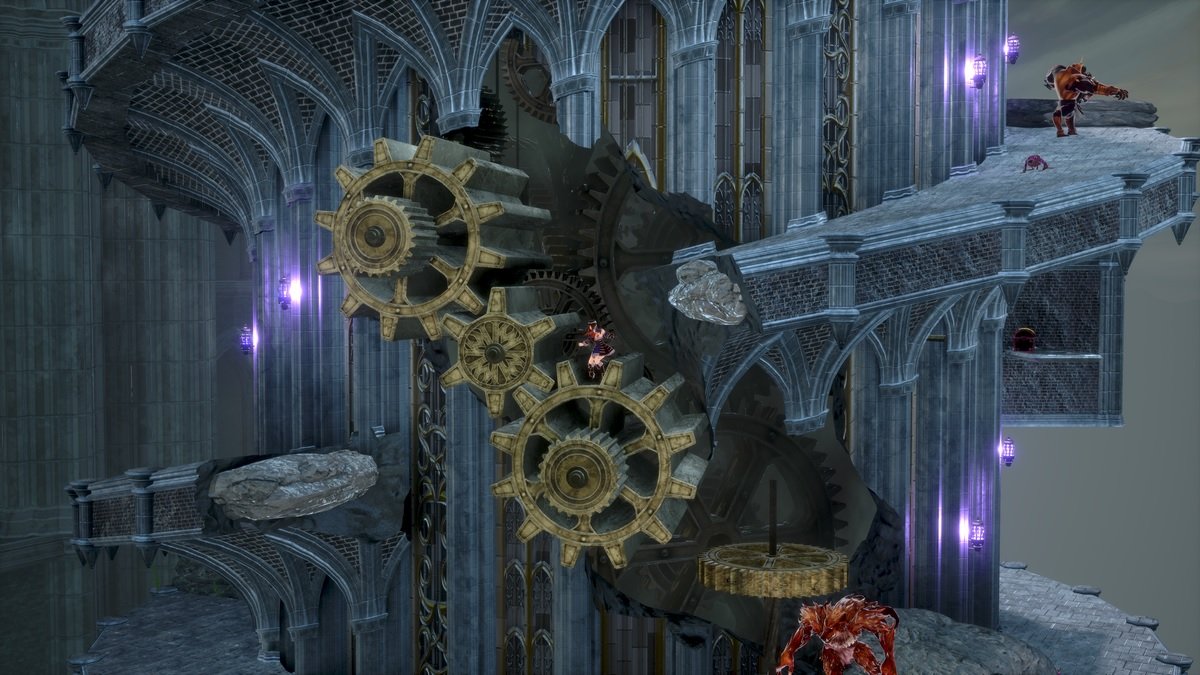 From there, I proceeded to explore rooms and inch closer to the boss battle. I wasn’t sure where that was, but seeing as how the majority of one’s time spent in a metroidvania game is centered around exploring, I figured I would get a feel for the movement. This is where I started to feel a bit unsure about Bloodstained.

Miriam is incredibly slow. I understand that even Alucard walked at a leisurely pace, but the years since Castlevania was on the scene have given us similar titles with a wide range of traversal options. Even Castlevania titles after Symphony had main characters with faster walk cycles.

This wouldn’t be the biggest issue, but the room structure in Bloodstained is a lot larger than most Castlevania games. Simply getting from one end of a room to the other takes a decent chunk of time. I even looked for different items in the inventory to speed the process up, but Miriam isn’t in a hurry to get anywhere. 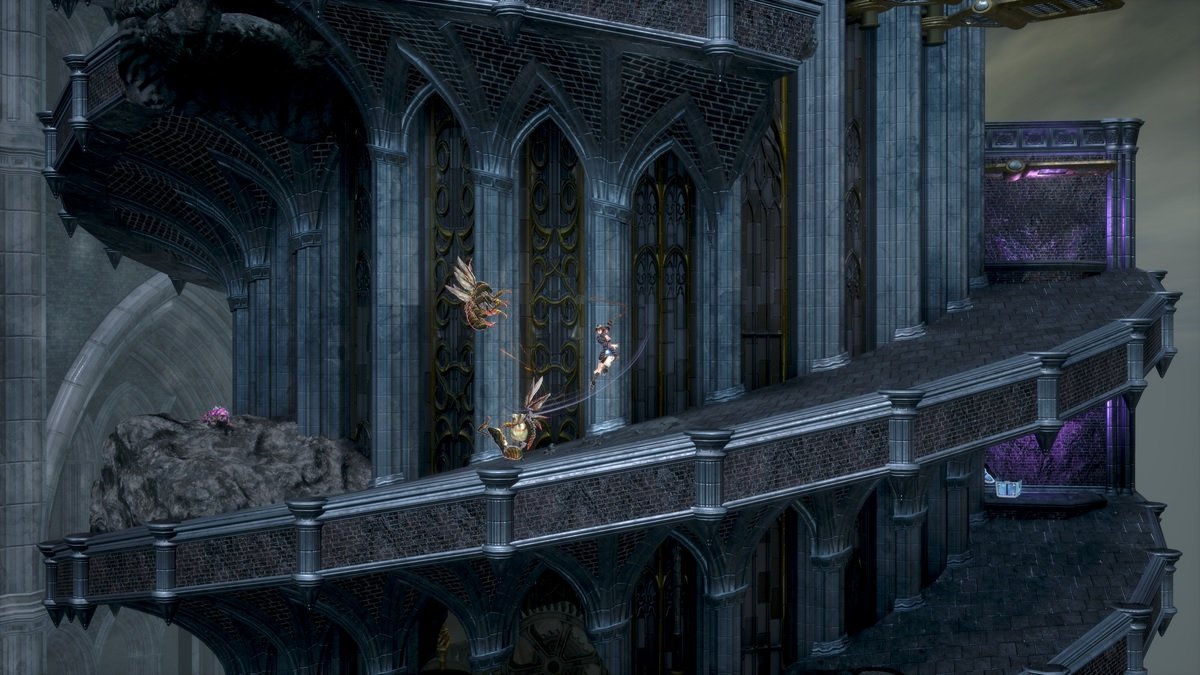 At least the different weapons change up the combat quite a bit. The demo gave me access to axes, buster swords, spiked boots, and a gun. It’s nice to have the option to mix-up how the combat works, even if it’s taken from Castlevania. The buster sword, for instance, has a massive attack arc with some crazy long wind up. The boots are extremely close range, which can leave you open to attacks if mistimed.

That is where I ran into my next issue. I’m not so sure the collision detection on enemies is functioning properly. I’d walk to a distance that I felt was safe, but then get hit as soon as the enemy turned around. There was a small gap between us, but the enemies seemed to ignore that. It doubly hurt because the knock-back Miriam suffers seems to be a little unfair.

A series staple from Castlevania, suffering a blow from certain enemies will knock Miriam back a few inches and potentially off cliffs. I have no problem with that idea, but Miriam has very limited frames of invulnerability after losing health. I ran into a few instances where I’d be knocked into a foe, go to move away and suffer an extra two or three hits because I kept getting juggled between two goons. 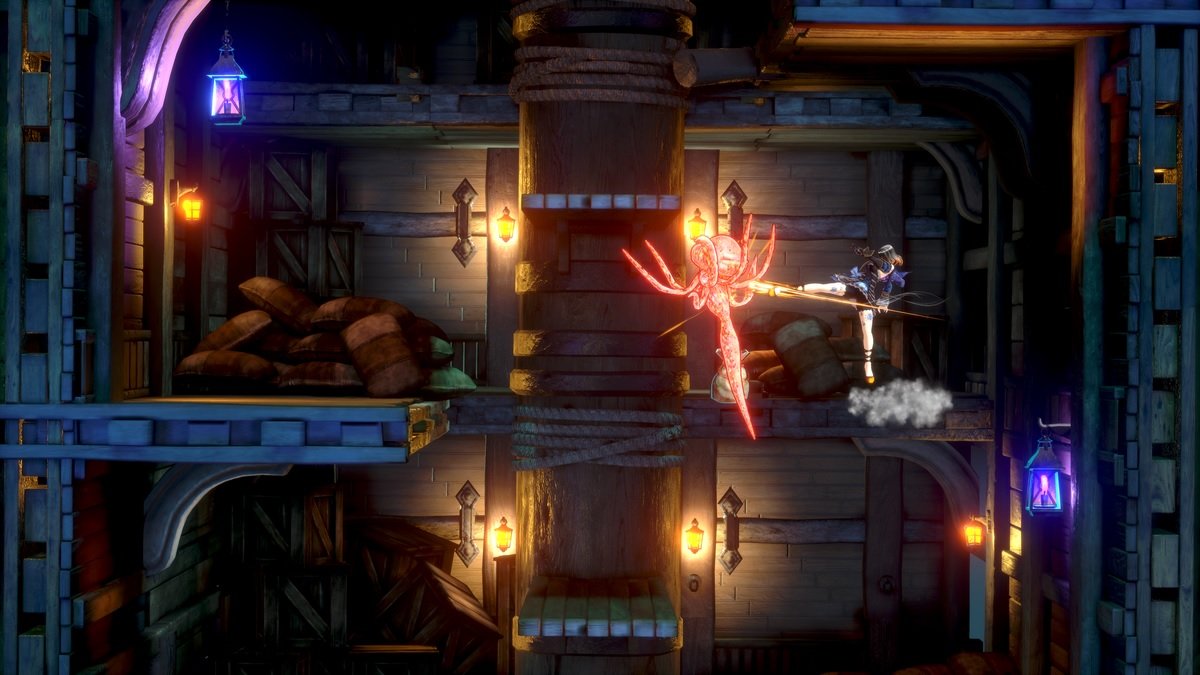 This really came to a head in the boss fight, which lacks a lot of basic feedback for the player. I was clearly attacking the double-headed dragon, but nothing I did would make him flinch. I’d go to jump over an attack and mistime it, then land under one of the heads and take five hits before getting clear. Just trying to figure out how close I needed to be to strike was exceptionally difficult, but not even knowing if I was close to defeating him made it frustrating as hell.

For my second attempt at the boss, I utilized the new radial load-out menu to my advantage. I had my boots equipped on one shortcut and a heavy axe on another. When I felt I had a chance, I swapped to the axe and dealt a few blows before switching back, all without pausing the game. It’s a nice quality of life improvement, though its usage is odd.

Miriam can equip a health potion in her item slot, but there isn’t actually a button on the gamepad for using it. To drink the potion, you’ll need to have it set to a load-out and then select that from the radial menu. Swapping weapons as I did will see Miriam automatically use the health potion if she has any damage. That’s a huge pain in the ass when you’ve only suffered 10 health and your potion restores 100. 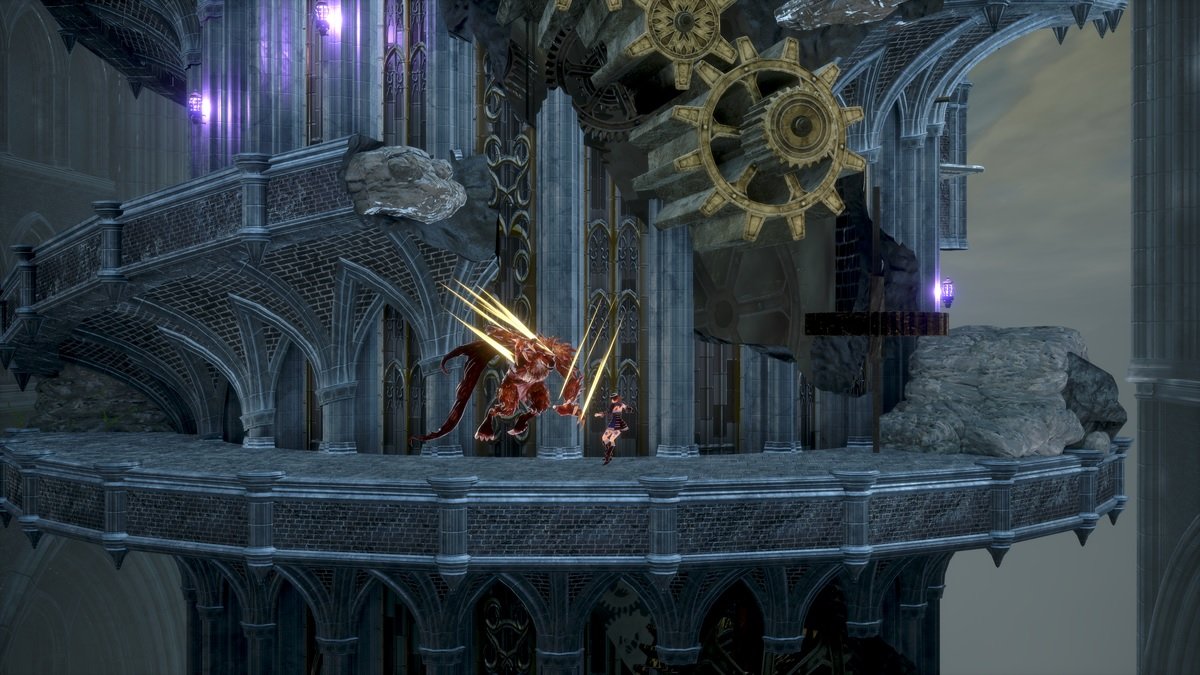 So dying a second time, I tried a third attempt and couldn’t figure out if I really made any progress. I struck the boss for a ton of damage and learned how to dodge its attacks, but it wasn’t flashing red or making any desperation moves. For all I know, it had 10,000 HP, the game just never told me. That’s not dissimilar to Castlevania, but bosses in that show more signs of receiving damage instead of just a number.

Maybe getting too comfortable with newer metroidvania games is to blame, but I left my demo session of Bloodstained feeling fairly unimpressed. I’m all for retro games, but one shouldn’t completely ignore the progress gaming has made over the last console generation. Even the Inti Creates developed Bloodstained: Curse of the Moon feels more modern than Ritual of the Night and that is a recreation of the NES Castlevania titles.

Likely it was the lack of context that threw me for a loop. Bloodstained has had multiple demos on Kickstarter and backers probably know everything about this game world. To them, they’d be able to jump in and figure out all of the subtle differences between builds. For me, I’m just confused at how I got to this point and what the game even plays like. To expect anyone to play a brand new game starting from the middle is crazy, but there is only so much you can do for demo purposes.

Maybe it’s just not for me. I hate to say that, being a fan of Castlevania, but Bloodstained is possibly a bit too retro for my tastes. I still have faith that the final product will be good, but I’m going to keep my expectations in check for the final release.