Boss Monster is a card game you likely haven’t heard of. Successfully Kickstarted back in November of last year after exceeding its requesting funding amount by almost 18 times the original goal, it’s been available for purchase since around February.

The premise of the game is simple — you’re the Boss Monster in a dungeon of your own design, and you must attract as many heroes to it as possible and kill them for their souls. Collect enough souls before your opponents and you win the game, but if too many make it through your dungeon alive, they’ll kill you instead.

With an 8-bit art style and writing that’s an homage to both classic NES games and a lot of current pop culture, Boss Monster is worth picking up if you’re looking for a light-hearted card game that’s easy to teach and play, even for people who don’t board game often. Those who insist that all their games contain deep strategic experiences or find themselves frustrated by games with a strong luck element may want to steer clear, but I’d recommend Boss Monster as a casual game that should appeal to board gamers of all skill levels.

Boss Monster’s rules are simple, and after a couple playthroughs to familiarize yourself with the rules, games should take roughly 20 minutes to complete. Play begins with each player randomly selecting a Boss Monster card, each with a special power that’s activated after five dungeon rooms are completed, drawing their starting hand, and building the first room of their dungeon.

At the beginning of each turn, heroes gather in the village. There are four types of heroes –fighters, mages, thieves, and clerics, each looking for a different type of treasure. Later in the turn, each hero will go on an adventure to the dungeon containing the most treasure of their preferred type (if there’s a tie, they wait in town until the tie is broken on a subsequent turn), and pass through that player’s dungeon room by room. A hero that survives your dungeon deals you a wound, and five wounds knock you out of a game. A hero killed in your dungeon becomes a soul, and the first player to collect ten souls wins.

After the heroes gather in the village, each player gets to draw a Room Card, representing (surprise!) a room in their dungeon, and they may then build a room out of their hand if they so choose. Each room deals a set amount of damage to any hero that passes through it, and has an additional effect — for example, some deal extra damage if your dungeon meets certain conditions, some allow you to immediately build or move other rooms. Every room card also contains a certain amount and type of treasure or treasures, which are needed to actually get heroes to come to your dungeon in the first place.

There are also Spell Cards which can be played either during the building phase or the adventuring phase. Spells have a variety of effects and tend to be very powerful, and will often determine the outcome of a game. You only start with two, however, and cannot naturally draw more unless you have specific rooms in your dungeon that allow you to do so, or your Boss Monster card’s power gives you more spells on the completion of your fifth room. 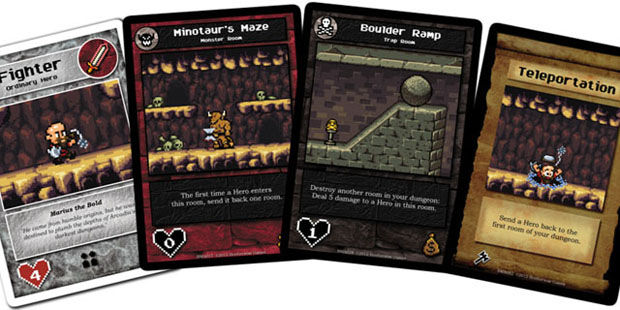 The strategy behind the game is fairly simple — build a dungeon that’s capable of killing heroes, while managing your treasure properly so that you’re claiming as many heroes as you can while denying other players hero types by forcing ties. Most games we played involved lots of treasure ties in the early rounds, until someone could finally pull ahead and snag a huge pack of heroes that had backed up in town.

While there’s little direct interaction with other players, unless you’re playing a spell card while they have heroes in their dungeon during the adventure phase, the treasure management still makes the game feel competitive. Snagging a huge pack of heroes out from under your friends feels great, as does watching a confident player with a strong dungeon get hit with multiple wounds after one of your Spell Cards throws a huge wrench in his plans.

However, because this is a card game based on random drawing, luck does play a huge factor in terms of what cards you draw, what rooms you can build, what kinds of treasure you have access to, and what spells you end up getting. Every now and then, you’ll have a game where one player really can’t compete with the rest because they’ve gotten unlucky with their rooms and either can’t get enough treasure to attract any heroes, or can’t quite put together a dungeon that deals enough damage. Luckily, games run short so this player shouldn’t feel too put out, but among our group we had some frustration since this happened to every player in at least one game they participated in.

Boss Monster is quick, light, and does a great job infusing the game with a retro, NES-style theme that its 8-bit art belies. I recommend it to people who like to play with board gamers of varying skill levels, even if those people aren’t huge videogamers, with the caveat that most players will experience a frustrating game every now and then. As long as you don’t mind games with moderate luck elements to them and aren’t playing with people who will pitch a fit if they end up with crummy cards, Boss Monster is a solid addition to your board game collection.