The version you always wanted

The thought of the Diablo franchise coming to consoles yet again was something I found hard to believe. I had a front-row seat to the launch of the original Diablo on the PlayStation, and to say it was a letdown is an understatement.

But after I had gotten in some quality time with Diablo III, I actually had faith that the pared-down mechanics could actually work outside of the PC platform — the question is, would I actually play it all over again on a controller. In fact, when it came time to actually sit down and play the console game last week, I thought I had enough of Diablo III with a few hundred hours poured into the original PC release.

Before I knew it though, I had nearly beaten the game twice over on consoles in a single afternoon. 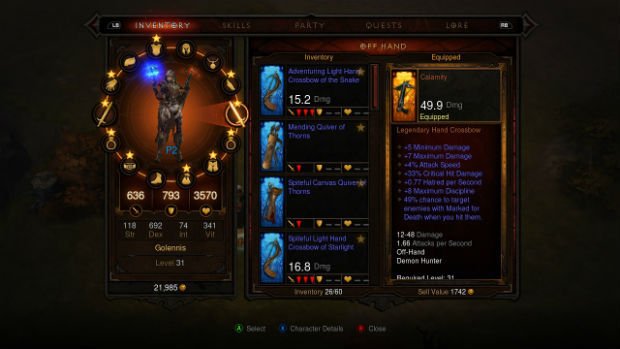 I’ll spare you the intricate details of Diablo III‘s most basic of qualities (you can read about them in Jonathan Ross’ review here) like the simplified rune system and class mechanics, but suffice to say I heartily enjoyed Diablo III at launch. In fact, the game is mostly intact from the PC version including the extra Paragon levels that enhance your character past the maximum level limit, and every other bit of content is still accounted for.

Since keyboard and mouse support on consoles is basically dead these days, one major change is of course the requirement of a controller. It operates just as you’d imagine, with the left stick moving your character about and the rest of the buttons essentially functioning as attacks (which can still be customized to your will by enabling “Election Mode” in the menu).

Dodging is a new mechanic that’s mapped to the right analog stick a la God of War, and it works wonderfully well — as in, I kind of want a patch to add it to the PC version. There’s a lock-on ability that also works as intended, and given the hack-and-slash nature of the game, the quickness of the controller mechanics feel natural. Melee characters might be more suited to this scheme than ranged classes, but I didn’t have any major issues with the Demon Hunter, Witch Doctor, or Wizard. 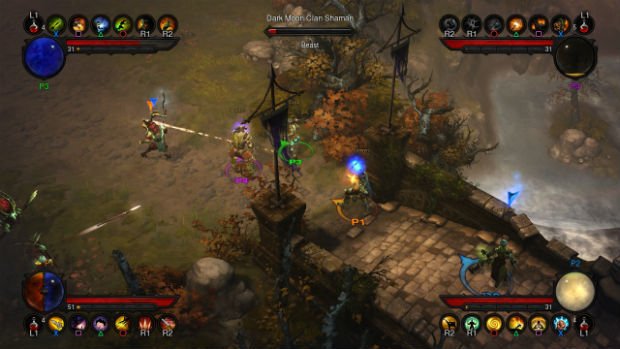 The only thing I’m not really keen on in particular is the user-interface system, which is rather clunky once you’re micro-managing all of your loot and skills late-game. Since the console version still employs the same limited runic skill system as its PC counterpart, it’s not too hard to manage all of your abilities and map them to the game’s face buttons and triggers.

But the inventory system is a different story, since Blizzard has designed a radial-style UI to sift through all of your inventory spots and junk individually. Each piece of armor and weapon must be viewed one by one, forcing you to equip the proper gear or mark it as junk by clicking the right analog stick.

There is a concession for all this madness in the form of an on-screen “plus or minus” layer when picking up loot, to let you know whether or not it’s worth picking up or equipping on the spot, sans menus — but once you progress to the point where loot is more nuanced, it’s fairly useless. In short, prepare to flip around menus a fair bit if you care about your stats or higher difficulties. 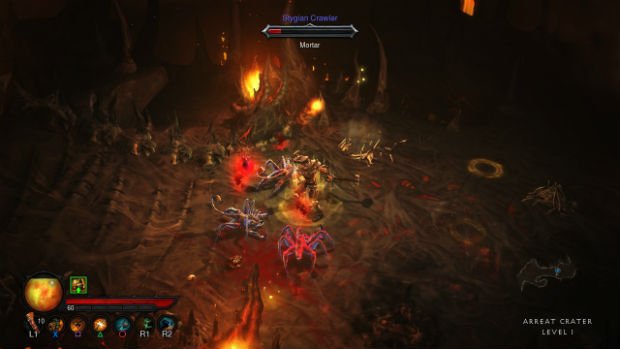 So what’s the biggest change? There’s no doubt in my mind that it’s the complete removal of online DRM and the Auction House (in any form — in-game gold or real money). This is not only a win for consumer rights from an industry standpoint, but it also mechanically strengthens the game. Loot is much better in the console version since people can’t just pick up the best pieces on the Auction house, and it’s a feeling that’s fairly evident sooner rather than later.

Yes, it took two iterations of Diablo III to get it right, but thankfully you can now play the game offline without an install — you just pop in the game and it’s instant action. Of course the removal of the online requirement may have its drawbacks depending on who you talk to, as there is no Blizzard or Battle.net connectivity whatsoever — meaning you cannot import or cloud save your characters from the PC version.

But so long as you’re willing to start anew, you’ll have plenty of options to mess around with the way you want to play them. Same-screen co-op is supported for up to four players, with the same drop-in and drop-out play from the online component — and on the PS3, it’s also one of the few games to fully support multiple profiles. From a local-op standpoint, it’s just as engaging as the PS2 Baldur’s Gate games or the Champions of Norrath series in that it offers up fast and easy hack-and-slash fun. 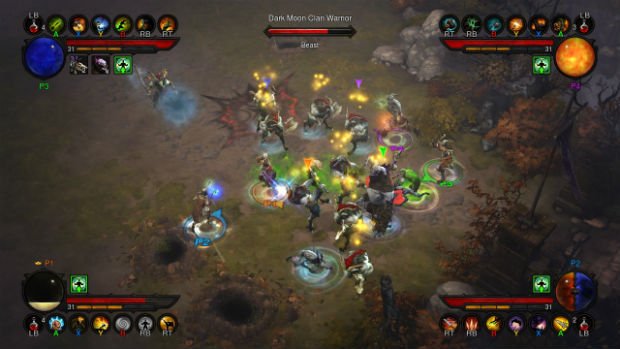 I had no trouble finding games online, dropping out, and adding local players into my session with their own profiles and characters. There’s also a plethora of choices, as you can turn off the option for anyone to join, set parameters for the type of game you want to broadcast to other players, and more. Funnily enough LAN play is also built into the console version of Diablo III in addition to offline and online play, which is a nice touch. Blizzard really went all-out in terms of multiplayer and as a result, it makes for a great party game — a stark contrast to the DRM-laden, isolated feel of the PC version.

For the thousands of gamers out there who feel duped by Diablo III on PC, it may be hard to justify buying the game all over again on consoles for a better experience — especially since the announced expansion may come to the PS3 and 360 later than the PC. I know it’s a bit hard to swallow feeling like you were beta testing a future iteration of the game, but so long as you’re willing to return to the world of Diablo and vanquish its evil once again, this is the best way to do it.