Easily the best set in the game so far

Disney Infinity is in this for the long haul, because after spending $100 million on R&D, Disney and Avalanche still have quite a bit of content to gradually dole out. Some content will arrive by way of characters that can only be used on the Toy Box, and a select few others are getting their own Play Sets, complete with brand new worlds and missions to explore.

While we’ve already seen that the Cars playset is a tad overpriced for what you’re getting, Lone Ranger is absolutely worth it. 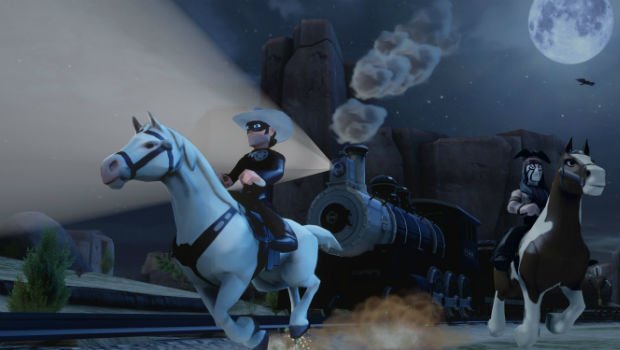 As I previously explained, a Play Set comes with two characters and a new world, and here you’re getting the Lone Ranger himself (Armie Hammer), Tonto (Johnny Depp), and a wild west sandbox (literally!) set in a quaint town in Colby, Texas. Colby is a fun place to mess around in, as there’s a ton of different places to explore, including cliffs, caves, multiple towns, and open plains full of character. The Lone Ranger set also gives you a ton of transportation options, including horses customized to each character — so you can fulfill your dreams of shouting “Hi Ho Silver!” and actually mean it.

Although you start off with a pop gun as the Lone Ranger, Tonto literally comes out of the gate running with tomahawks to throw, and eventually you’ll work your way up to cannons, train-mounted chain guns, and dynamite. Enemies tend to blow up into pieces like LEGOs, but if you’re typically turned off by the playful nature of the other playsets, this is similar to Pirates in that it’s targeted towards all ages. The result is a more simplistic, yet still fun version of Gun or Red Dead Redemption in Disney form, which surprised the hell out of me. 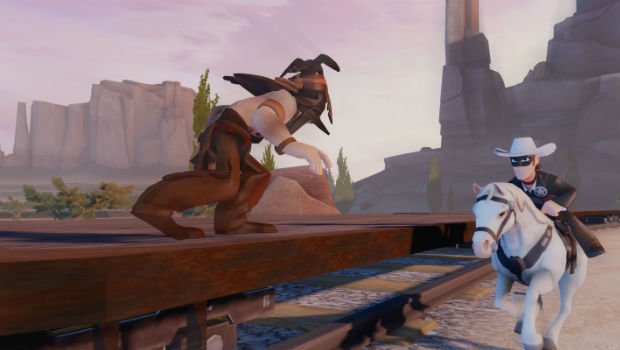 My favorite aspect of the map is the giant train that circles the town, and eventually crosses the entire landscape as you unlock more portions of it. You can customize almost every boxcar to your liking, stop and start the entire train at will, fight enemies on it, and even race it on horseback.

I spent tons of time just messing with the train, arming it with Gatling gun boxcars and shooting targets as it was moving, and it’s even more fun with a partner. It’s a very simple concept, but one that works extremely well in execution and augments the map in a big way. Like most Toy Boxes it should take you around 3-4 hours to do everything, and more if you go for a 100% rating.

The narrative is something you’d see in a typical western film, but the sheer amount of fun you’ll have getting through it makes up for any blemishes it may have. The same goes for the Lone Ranger and Tonto from a character standpoint, who are a blast to play as despite the fact that they’re not the most interesting pair in the world. Missions have a decent amount of variety as well, and aren’t all just fetch/gather quests. 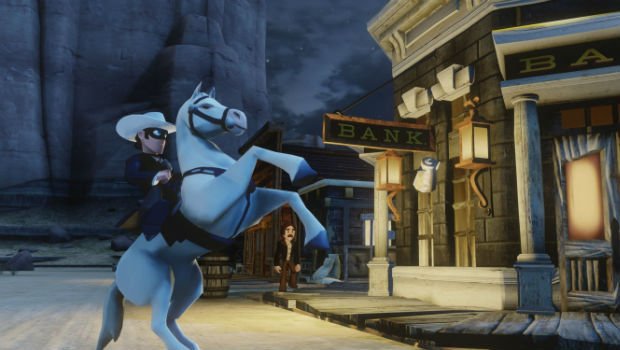 Given the fact that there’s only two characters available, this the only current Play Set that can be completed 100% out of the box. The hidden vault that requires every toy in a realm to open? You can totally grab all that content immediately, as well as the hidden character chests and everything in-between. It all unlocks some really nice Toy Box extras that are enjoyable to play even after the Play Set is finished, which you can enjoy with any character you want — not just the two from this set.

The Lone Ranger not only feels like a complete Play Set in and of itself, but it’s also the most fun piece of content available in Disney Infinity. I have no particular affinity towards the new Lone Ranger IP, but as a fan of westerns in general I was easily able to treat it like any other action game, and rode off into the sunset extremely content.