A hot set of ports

Hotline Miamiwas one of my favorite games of 2012. I picked it up a few months after release, only to spend that entire afternoon glued to my monitor. The killer soundtrack, the puzzle-action gameplay, and the one of a kind visual style all made it easy to become absorbed into the Driveinfluenced world of Hotline.

Fast forward to 2013, and the folks atDennaton Games and Devolver Digital have released a Vita and PS3 version of the game, which not only supports cross-buy (one purchase for both versions), but cross-save functionality, as well as Vita-specific touch controls and beautiful OLED graphics.

It’s just as good as it sounds. 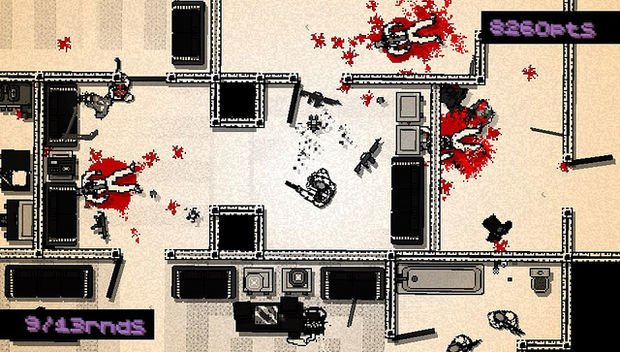 In case you haven’t heard of Hotline Miami yet, it’s essentially a twitch puzzle game with a pretty unique plot that’s been open to debate ever since the game dropped last year. Without spoiling too much, the game makes use of the unreliable narrator device in a neat way, as you take a journey through the core game with the “protagonist” fans have named “Jacket.”

Jacket is a pretty simple man, opting to constantly follow orders, all of which involve murdering and systematically clearing out entire buildings full of enemies. To be blunt, the game is brutal — I’m talking graphic curb-stomping, bats to the head, and shotgun blasts that blow torsos in half.

It’s a lot like Smash TV, but much more puzzle oriented. Rooms are sectioned off by doors, which enemies obviously can’t see through until they open. As such, you can slowly move room by room and clear out enemies, or risk using guns and other loud methods of killing to invoke an all out brawl (which can sometimes be the most effective method of play). It’s just as fun as it sounds, and I loved the level of difficulty Hotline brought with it, which is sorely missing from many games these days.

While I’ve seen some people disparage the relatively unpredictable and sometimes glitchy AI, that’s actually one of the selling points for me — it helps keep the game entropic, which fits right into the theme of Hotline. For instance, even if you take the exact same steps after a death, an enemy who was a previously unsuspecting easy kill may suddenly turn around and give you a shotgun to the face. 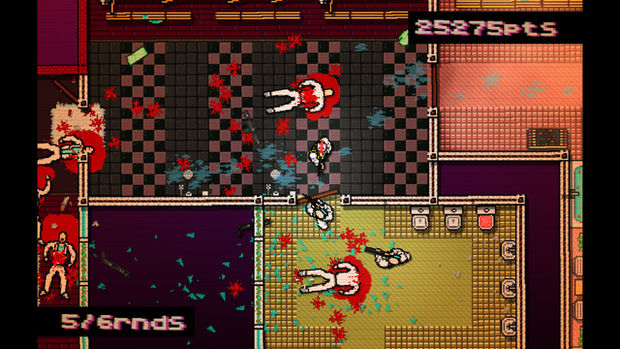 It helps mix things up and forces you to learn every possible strategy on the fly, essentially forcing you to master the game in a subtle way. Before long, I was picking up on my old strategies, and breezing through some of the game’s rooms before I was humbled all over again and forced to re-think everything I knew. As a side note, I don’t know if the developers made the infamous “Hospital” chapter easier, but I was able to complete it on my second try, so it sure feels like it.

As you may have noticed from the promotional art, masks play a huge part in Hotline Miami, but in a mechanical manner in addition to their contribution thematically. Different masks (which are unlocked in each level in various ways) have different abilities — such as the Dog mask allowing you to bypass dogs, or the Tiger mask granting you the ability to kill enemies in one punch.

The very first time I beat Hotline Miami, I just used the chicken mask (which grants you nothing) the entire game. On my next playthrough, I utilized a wide variety of masks, which changed the way I approached each level. Masks may seem like a gimmicky add-on, but they really do increase the game’s replay value and add a ton of depth. Oh, and the soundtrack is still killer, so make sure you play this game with headphones (especially on the Vita).

The PS3 and Vita versions of the game boast a very simple to use control system that essentially works like a twin-stick shooter — and it works well. Players can move around with the left stick, aim with the right, and pick up/use weapons with L and R respectively. It all works just as advertised, and I had no issues acclimating myself to the scheme. On the Vita, you can even use multi-touch to scroll the screen and lock-on at the same time, which is an excellent design decision to help cement Sony’s portable as the best platform for the game right now. 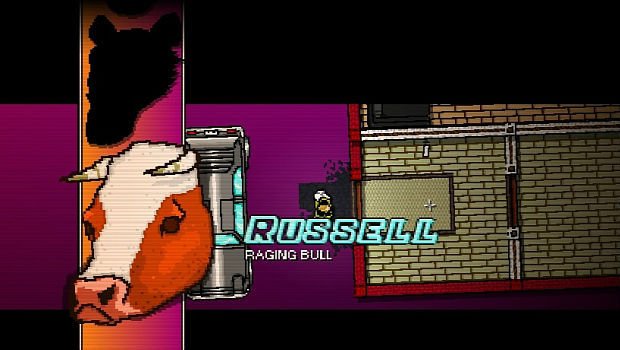 There sadly isn’t a whole lot of new content this time around — specifically, all you’re getting is “Russell” the raging bull mask — which turns the entire visual style intro a black and white filter, with the oozing red blood intact. In terms of extrasto help sweeten the deal though, there’s a lot on offer.

While they aren’t technically new, the two pre-order levels from the PC version are built into the Vita and PS3 port, which is a nice touch. There’s also leaderboard support for every level, trophies, and the aforementioned Vita touch controls. Cross-buy and cross-save support is the cherry on top of this very generous package.

As I said earlier, I spent my entire afternoon beating Hotline Miamion PC, and I spent my entire evening yesterday besting the Vita version all over again. While there may not be enough content to double-dip if you weren’t enamored the first time around, if you haven’t experienced Hotlineyet, this is literally the perfect opportunity to go all in.