In the first three issues of Archie’s Sonic the Hedgehog / Mega Man mini-series “Worlds Collide,” Sonic and Mega Man crossed paths for the requisite “hero crossover battle.” In the second three issues, they invaded Eggman and Wily’s Skull Egg Zone and mixed it up with the Roboticized Masters, Sonic’s captured friends mechanized to do the evil doctors’ bidding.

We’re over the halfway hump and racing towards the final battle as the last of the Roboticized Masters are defeated. Parts Seven (Mega Man #26), Eight (Sonic Universe #53), and Nine (Sonic the Hedgehog #250) feature some of the best fan service from any comic I’ve ever read, which makes it all the more saddening that this adventure can’t last forever.

If you were on the fence thus far — how is that possible even if you’re just a casual fan of either property? — these next chapters demonstrate just how amazingly compatible our two blue heroes and their universes can be. 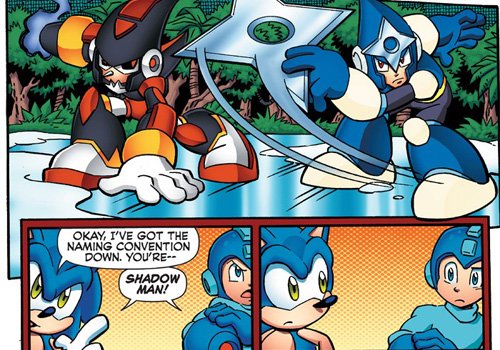 Part Seven drops us right into the middle of the series’ second act, “Into the Warzone.” Sonic and Mega Man had already succeeded in converting the Chaotix back into organic form and tasking them with helping Blues find a way into the Wily Egg battle station. Out of nowhere, the Shadow Men attack! Yes, I said “Shadow Men.” This naming conflict was foreshadowed back in the first issue, and the comic finally addresses it to humorous effect.

While our team turns their attention towards the fiery Blaze Woman and the telekinetic Silver Man, the imprisoned Dr. Light gets a visit from Rouge the Bat, on a mission to track down her missing partner, Shadow. The two conspire to sabotage the Wily Egg from the inside, all under Eggman and Wily’s well-groomed mustaches.

Sonic and Mega continue to bond during their trial by making playful jabs at one another’s physical appearance — Sonic with his “noodle-limbs,” Mega with his “mega-undies.” This behavior is par for the course as far as Sonic is concerned, but it’s rather uncharacteristic of Mega. He’s typically the good boy scout, but clearly some of Sonic has rubbed off on him. Mega has never quite had a partner like Sonic, so their becoming so connected seems to have allowed the Blue Bomber break out of his armored shell and cut loose somewhat. 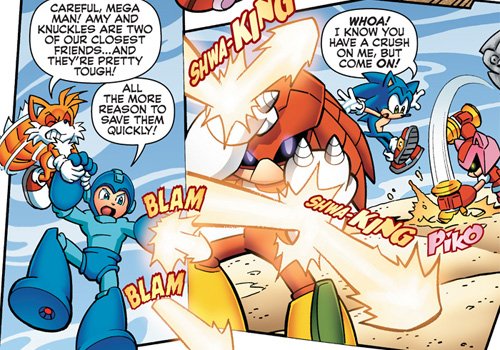 At the same time, Sonic continues to be grounded by the same obstacles that Mega has conquered numerous times in the past. I speak, of course, of the dreaded disappearing blocks — a sequence appears in front of a waterfall, but Sonic can’t seem to get the jumping pattern right. Not enough to completely humble the speedster, but roadblocks like these make it clear that Sonic is not the peerless individual he credits himself as.

Issue Eight pits the final and arguably strongest two Roboticized Masters, Knuckles Man and Rose Woman, against our blue heroes. As for Eggman and Wily, now faced with the very real possibility that their grand plans may fail once again, their camaraderie finally begins to break apart. I’m shocked that it took this long for their treacherous natures to float back up to the surface, although it was inevitable. I’m saddened by the turn all the same. 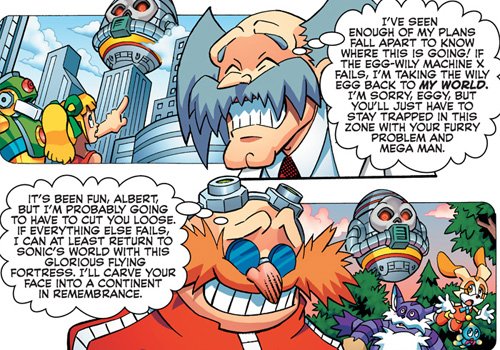 Eggman and Wily’s friendship perfectly encapsulated everything that makes them such beloved villains. They possess a goofy, humanizing side that’s endearing in spite of their propensity towards unspeakable acts. Because of their massive egos, you wouldn’t think they could be completely sympatico, but they were. Watching that friendship slowly erode is genuinely disheartening, and it’s a testament to Ian Flynn’s writing skills that he could make us care about this unholy duo so much.

Part Nine kicks off the final act, “Chaos Clash,” with another change of the penciling guard. The previous four issues were drawn by Tracy Yardley!, who had never before worked on the Mega Man series and, in my opinion, did not have a solid handle on those characters’ proportions. Art duties have now been passed on to Ben Bates, who previously did a bang-up job on the comic’s Mega Man 2 adaptation.

Ben’s talent and endurance are pushed to their limits, as the opening two-page scene is… well… see for yourself: 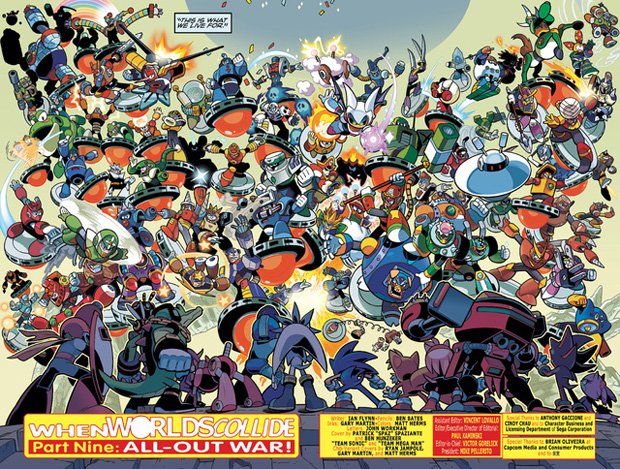 Mega Man, Proto Man, Sonic, and Sonic’s crew versus every single Robot Master from Mega Man 2 through Mega Man 10, minus the MM1 bots and the Stardroids from MMV on Game Boy, lead by the recently roboticized Rouge Woman! Using the power of the Chaos Emeralds, the doctors have managed to time-clone all of Mega’s defeated foes, meaning they will continually respawn no matter how many further times they are destroyed.

And if you thought Sonic would finally meet his speedy equal in Quick Man, ha ha ha, nope! He runs circles around the dude! In fact, there’s yet another two-page spread in which Sonic makes a mockery of more than a dozen Masters at once: 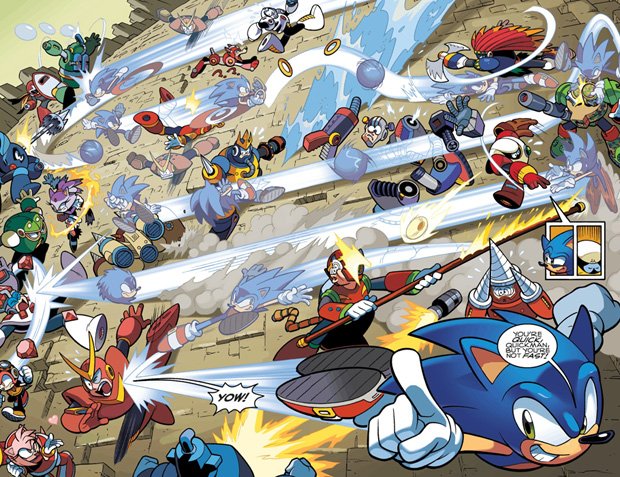 Sonic reacts to each Master’s feeble attempt at slowing him down with comic results. Every battle stage in this issue is filled with so much incredible detail. It’s awe-inspiring.

The entire comic was building up to this climax, a complete realization of the crossover’s potential. The ground rules were established, the stakes were raised, concepts from the respective franchises were slowly introduced, then finally the payload is delivered. And what a delivery it is! People who haven’t started reading: this is what you’re missing!

Part Nine ends on a rather shocking climax, but with three issues remaining, the action is not about to let up. The eleventh hour approaches.