Back in February, PlayStation 3 and Vita owners finally got their taste of the motorcycle madness found in the Trials HD series that Xbox owners have been enjoying for years. Sadly, Urban Trial Freestyle just didn’t seem to hold up to the standards set by RedLynx, even if it was still an enjoyable ride. Then, with nary any fanfare, the same title that hit PS3 and Vita snuck its way onto 3DS — and with an exclusive mode, no less.

Is its new track-editor feature enough to make Urban Trial Freestyle on 3DS the definitive version? Not exactly. 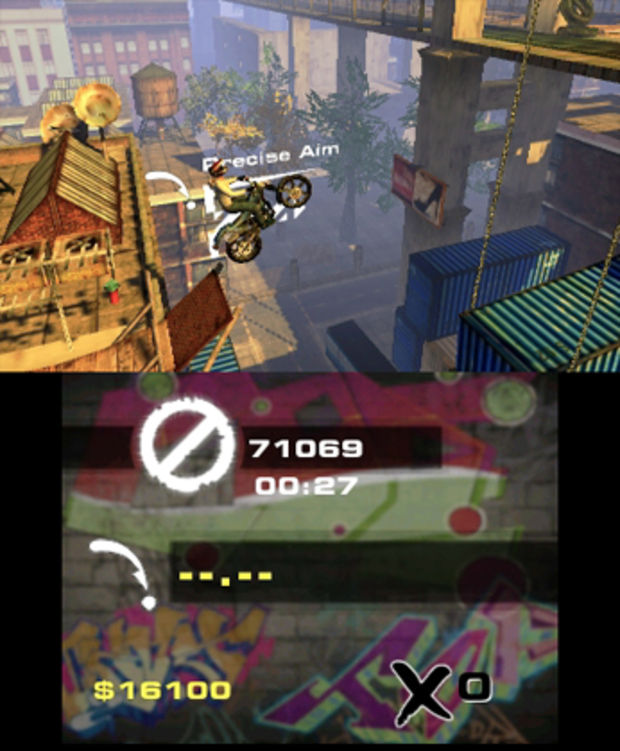 The main layout of the title remains relatively the same; get generic biker dude from point A to point B on his motorcycle while accelerating, braking, flipping, rotating, and generally jumping around like a goon while you try to top your best score through each puzzle-like level.

There are technically 40 levels in total, though you’re actually traipsing through 20 levels in a stunt run, then the same 20 in a speed run. Along the way you’ll collect money bags spread around which allow you to buy upgrades for your bike and outfits for the rider.

As in the PlayStation versions, Urban Trial is fun enough, but never quite reaches the same heights of Trials HD due to the repetitive level maps — though it’s still a serviceable title. The “events” that happen in certain levels to change the terrain are cool, the leaderboards add to the need to top scores, but at times the game seems a bit on the easy side.

Even with a few mistakes, you can get three out of five stars on just about every level, making unlocking the next and moving ahead a breeze. In fact, for a while I didn’t think you could even get any lower than three stars, as I unlocked all the levels in just a few hours with minimal backtracking.

Graphically, the 3DS version doesn’t quite hold up to the PS3 or Vita versions, but that’s to be expected. The backgrounds are still the standout feature, showcasing a sharply detailed desolate and apocalyptic backdrop to the crazy runaway trains and boulders that randomly breeze through the levels. The 3D is implemented well, too, though the character model on the biker himself is a but fuzzy, which hinders the 3D a bit. 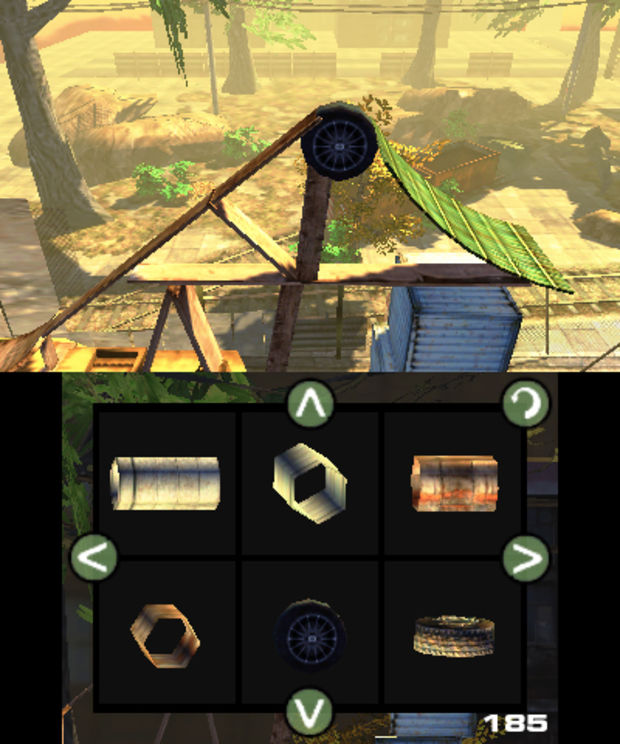 As for the exclusive track editor, you get what you expect: a minimal experience at best. There’s a wide variety of set pieces to choose from, but sadly no real rhyme or reason to their organization. Also, placing items or rotating them for placement is a tedious event, as control varies between touch screen and d-pad without any indication of which is necessary for either task. Also, inexplicably, there’s no way to share any of the tracks you create online. They simply are there for you, and you alone.

Urban Trial Freestyle isn’t a bad game — there’s just not much to it. The 3DS version doesn’t vary much from the other versions, but the few differences are noticeable. The one draw, the track editor, is a fine distraction, but it’s missing a few key elements. If you already have the PS3 or Vita version, the track editor may not be reason enough to pick up the 3DS version, but as far as physics-based motorcycle stunt games, you can’t do much worse.