It's almost 2015, and I just beat my first Metal Gear Solid

As much as wish it weren’t true, it is: I’ve never completed a Metal Gear Solid until now.

This is a series plenty of you adore playing, thinking, and talking about and that affection has rubbed off on me over the years. It’s infectious, but not quite to the point where I’ve committed myself to seeing the whole thing through from beginning to end. It’s difficult to talk yourself into such an undertaking, even if you know it’s for your own good, that starting is the hardest part.

Before that day comes, if it ever does, I’ve got my eyes on Metal Gear Solid V: The Phantom Pain. Then again, who doesn’t? You read Steven’s preview in all its sheep-stealing, horse-pooping glory, yes? Saw the “Nuclear” trailer? I’ll be right there with you during next year’s launch.

The lead-in game, Metal Gear Solid V: Ground Zeroes, is on sale this week on Xbox One. I’m a new console owner and, yeah, $6.60 sounds about right for what many have called a “demo.” As it turns out, a demo was exactly what I needed. The format worked in my favor. 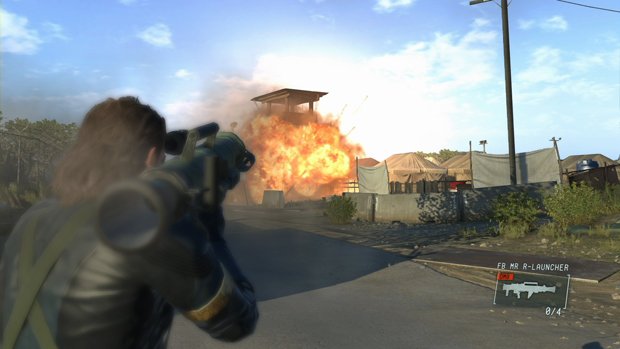 As a one-off experience, Ground Zeroes is approachable. It allowed me to loosen up and feel far more free to fail knowing that no matter how badly I screwed up, how shitty of a situation I got myself in, there was always the option to start over with minimal time lost. That’s comforting.

Something similar happened with Dead Rising. Originally, the time constraints proved to be too stressful. I couldn’t get into it, try as I might. Then I played Case Zero, the short, cheap standalone game that bridged the original title and its sequel. It was this perfect low-risk environment in which I could gain confidence and see if the larger experience was truly right for me. In the end, it was; convicts be damned. I gave Dead Rising a second chance and became hooked.

With Ground Zeroes, failure came fast and often, both because I’m new to the mechanics and this is a sandbox, after all. If you never mess up, you aren’t taking enough risks, I’ve since realized. The times when I made bold moves, botched them, and had to improvise a recovery were the most thrilling of all. And since the game can be beaten in a single sitting, I did just that.

While I’m reasonably sure I’d like The Phantom Pain had I never gotten around to Ground Zeroes, this little game, bless its soul, has made certain I’ll come in with a new-found bravado.

You and me, Diamond Dog. Let’s do this.