Deadfall Adventures may seem like an Indiana Jones or Uncharted rip-off, however the game is doing the exact opposite: it is engrained in the roots of the original inspiration for these “dudes adventuring in Mayan settings and stuff” stories, the Allan Quatermain series by Sir Henry Rider Haggard. In fact, quotes and themes from the original novel are actually woven throughout the game.

James Lee Quatermain, the leading man of Deadfall Adventures, is the great-grandson of Allan Quatermain. He’s accompanied by (or rather, escorting) Jennifer Goodwin, a US Agent, through Mayan temples, the arctic, and Egypt to obtain an ancient artifact. There are of course lots of mummies, dudes with guns, and various other baddies to combat to obtain these artifacts as you uncover the mysteries behind these settings.

James is equipped with a compass (your guide in the game) and a notebook (sketches that help with puzzle solving) along with a flashlight that can burn certain enemies. Treasure is hidden throughout the game and is mainly optional to collect. However, the treasures do allow players to improve James’ skills. The skill tree itself didn’t seem like a very complicated system, however the treasure does add a few bonuses to his abilities. 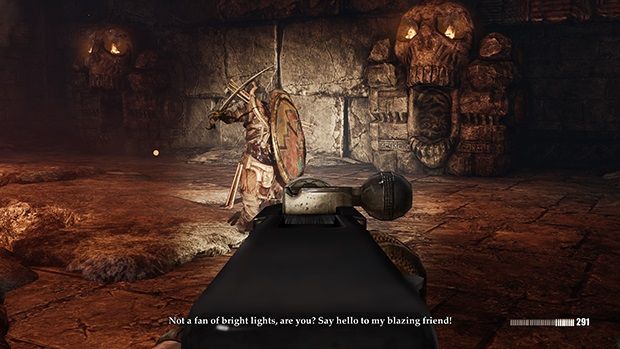 I thought it was interesting that the game showcases some prototype weapons that were never fully realized in the World War II era. The guns also reload and handle as they would have back then, which is something rare to see in these types of adventure games. I also thought it was neat that players can interact with the environment to help kill baddies. For example, some vases hold bugs that swarm and kill the closest thing to them (which could ironically be you).

In addition to the FPS combat, roughly 30% of the gameplay is dedicated to puzzle solving. For example, at one point you must arrange skulls in a certain order based off of some hidden clues around the area to open a room full of treasure. There’s also little puzzles to solve along the way to move past certain obstacles. If you’re not interested in puzzles, don’t worry – the game has two separate difficulty levels for combat and for puzzles, making it easier for players to get past those scenarios if they choose.

Jennifer, your sidekick, takes care of herself during fights and even takes down a few dudes for you. James and Jennifer have the typical “I’m stuck with this person” sarcastic banter, but I’m sure later down the road they warm up to each other. Deadfall‘s dialogue and mystical scenarios seem a bit more over-the-top than games like Uncharted, but I kind of like it that way.

Deadfall Adventures is set to be released for PC and 360 in September of this year.