It's okay to fail in Disco Elysium

Disco Elysium opens with you on the floor. Your character, whoever they are or whatever might be left of them, is face-down in a nondescript hotel room. You are surfacing, breaching the plane between the void and the living only to find yourself harboring the grand-daddy of all hangovers.

This is the introduction to the character you’ll inhabit through Disco Elysium. They are many things, and can become even more: calculating, feeling, thinking, judging, determined, or remorseful. But in this moment, you are at a low, possibly the lowest of low.

Moments later, you can die trying to get your tie off the ceiling fan. The headline reads “Cop Suffers Final Heart Attack,” and boy, does the word “Final” do a lot of work.

Some people might be picking up Disco Elysium for the first time right now, as it just received its Final Cut update and made its way to consoles. To some, that moment might be pretty frustrating—to go through the entire character creation process, only to die of a heart attack while trying to recover a piece of clothing. But I’m here to tell you: embrace those moments.

There are a lot of ways you can die in Disco Elysium. Very few of them are noble or dignified. You can die kicking a mailbox, by getting into a fight you have no business starting, or even just suffer intense mental damage from seeing your own face in the mirror.

Disco Elysium‘s moments of failure aren’t all terminal, either. Right at the beginning, if you’ve managed to weather the gauntlet of waking up and getting some clothes on, you can gather your composure and step outside, only to be face-to-face with a beautiful woman. With intense, potentially unearned confidence, you could attempt to flirt with her. And the words that spill out can be the eloquent “I want to have fuck with you.”

In other games, failure can feel really bad. Getting that big, all-caps FAILED marker means a piece of content might have just been locked off. Disco Elysium is okay with failure, though. It’s written to embrace failure. And you really should do the same.

Take the flirting example: after your detective has mustered the will to speak and still failed, the woman—Klaasje—laughs. She even asks you to say it again. It’s a humanizing moment that can even lead your character down the path of defining themselves, as someone remorseful and always saying things they regret.

In this moment, you’ve learned more about one of Disco Elysium‘s key characters, while also potentially establishing an identity for your own character. After all, your cop has just come up for air from a cataclysmic bender; maybe they are apologetic for all their misguided decisions, or at least they should be. Those thoughts can fester until, eventually, you are the Sorry Cop. 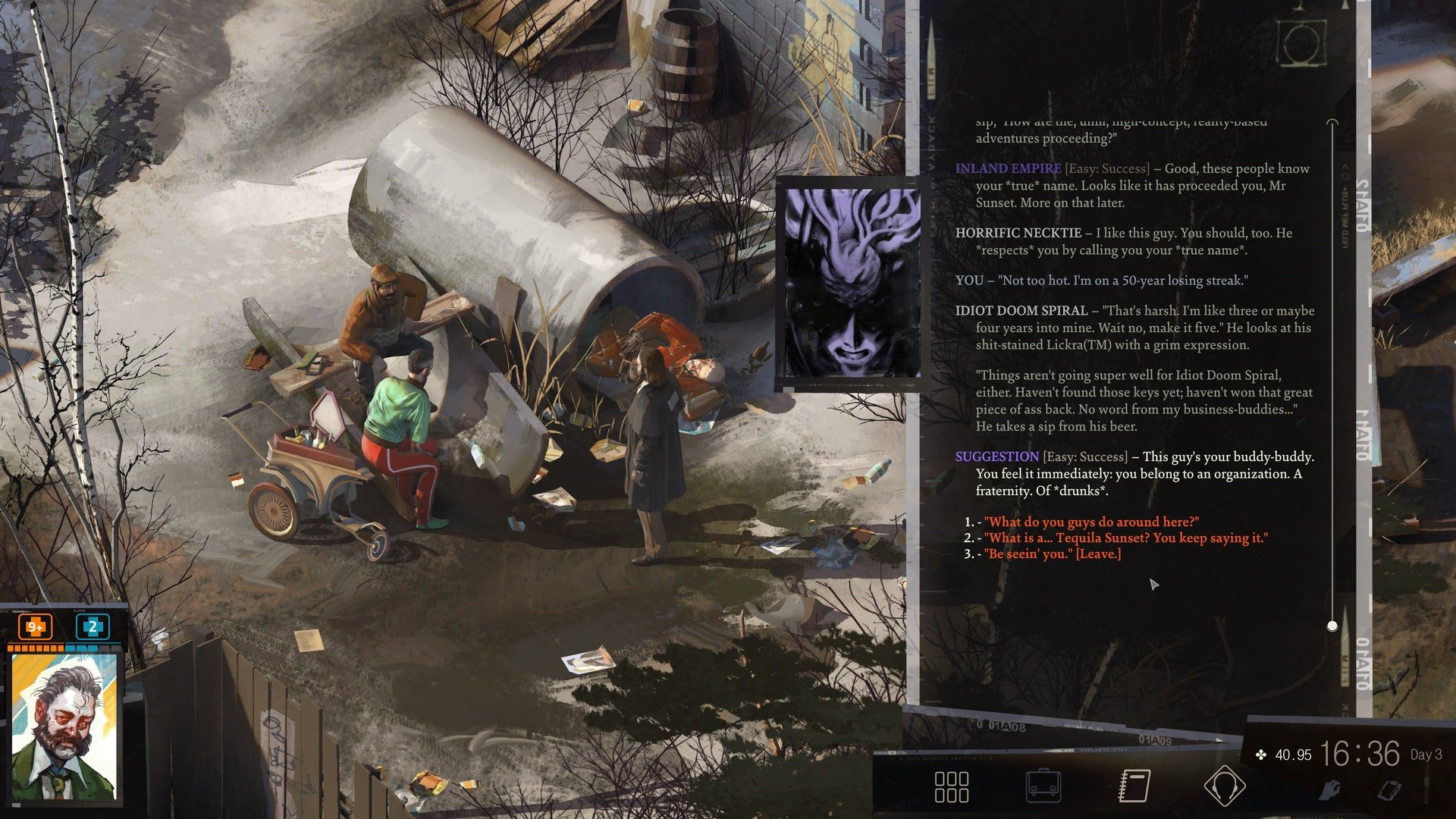 This route opens up through failure, and can continue to inform dialogue throughout the game, because that’s the kind of story Disco Elysium weaves. Failure can be a game over state, potentially, but trying to play in some kind of “perfect” way means you can miss a lot of this world.

The failures feed into shaping your narrative, because let’s face it, your cop is not Sherlock Holmes. With enough points, they might be able to muster the Visual Calculus and Logic to imagine crime scenes in real-time, to discern boot size from prints in the mud and then calculate the number of people present when a murder occurred. Oh that’s right, a murder happened—ostensibly, your character is in the district of Martinaise to figure out why there’s a body hanging in the yard behind the hotel.

Yet often, you can fail to complete a task a theoretically good inspector might be able to. It’s a struggle to even move the body, a task that becomes the crux of the early game. Every attempt can result in your character simply heaving over, unable to stomach the task. Your failures aren’t just fatal mailboxes and word fumbles, but as you learn, your character has been in Martinaise for some time. Your ever-present companion, Lt. Kim Kitsuragi, is here not just to help you, but to ensure the task at hand is finished, because it’s likely that you’re not up for the job anymore.

It might feel bad to fail a check and watch the health meter trickle down, or simply face humiliation. It might lose you some crucial early-game cash, or it might just make the path forward a little more difficult. But if you’re playing Disco Elysium for the first time, I can’t stress this enough: embrace those moments.

Failings can end up defining your cop, and you by extension, and makes your playthrough feel more like your own. Losing one option makes the next opportunity to progress all the more dire—I didn’t like that I had to literally beg the corporate negotiator Joyce for money just to have a bed for one more night, but I had to, because there was no source of income left. In a brief moment, I had to set my morals aside just to stay warm one more night, because I had so catastrophically failed during the day, and so many times before that.

It’s not just your character, either; many of the people in Martinaise have their own shortcomings. They might struggle to understand one another, or be beholden to their old lives to a fault, or simply be bad people. One of my favorite moments sees Kim Kitsuragi, a shining glimmer of a human being, say something incorrect during a brainstorming session and instantly realize it. As you see this internalized realization and correction, clashing against the anxiety of admitting the error aloud and committing it to record, you can allow him that moment to reflect and correct. 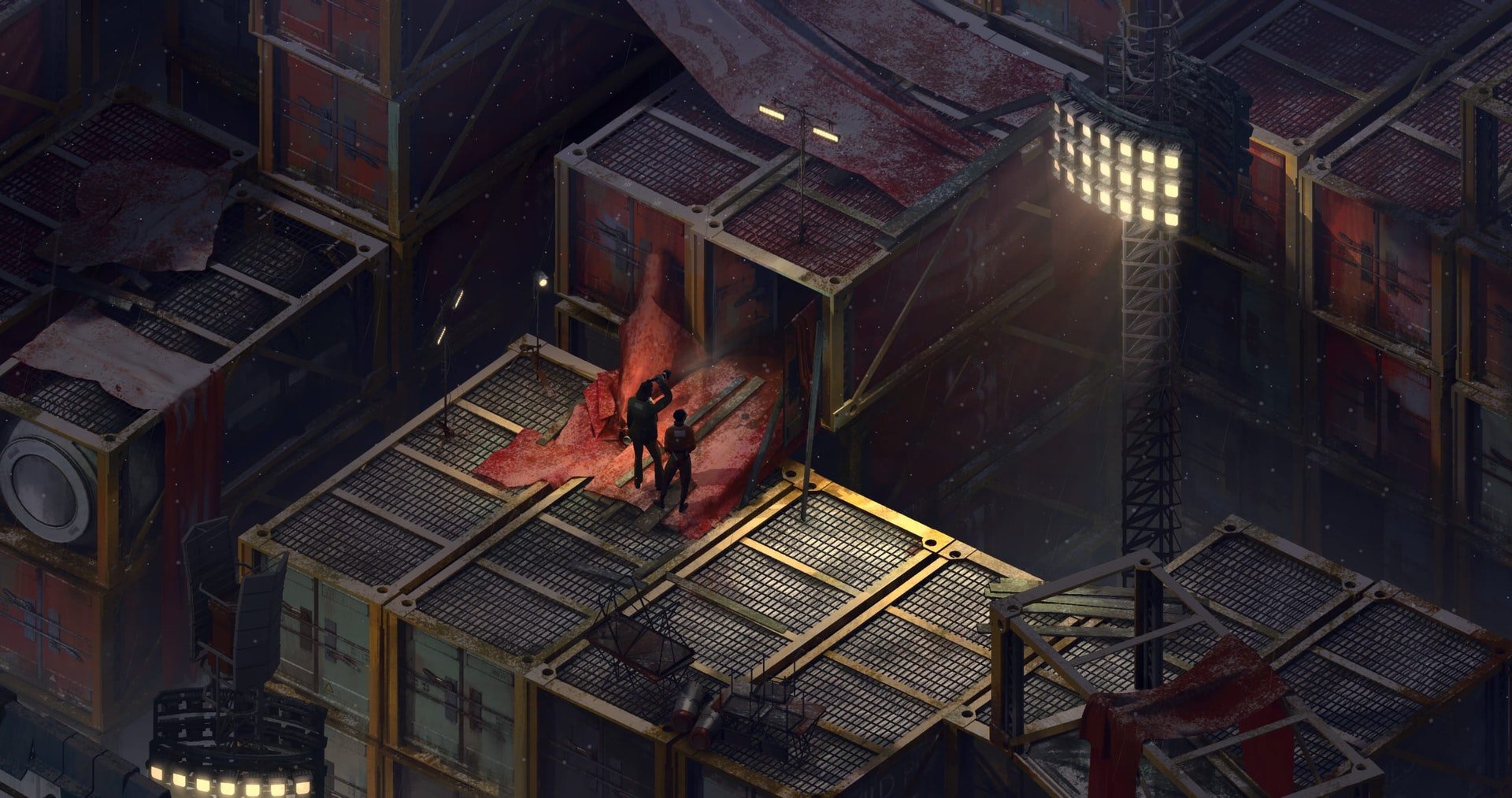 It is a small miscalculation with no critical narrative consequences, but it is a small kindness you can grant, as someone whose mistakes run much deeper than a simple inaccuracy. As the guy Kim is currently trying to drag out of the abyss, it’s the least you can do.

Disco Elysium is molded by those failings, and so I seriously urge you to embrace them. I’m as guilty of save-scumming as the next guy, but the writing of Disco Elysium feels like it rewards those who aren’t afraid to fail. Every lost check adds more to your character as much as it takes away, and it makes their own plight feel like your own. Sure, yes, you died trying to get a tie off a ceiling fan, but you—the player—were also the one urging your character to keep trying.

Failure can end up creating some of the most memorable moments in your time with Disco Elysium. It might mean you end up playing the sorriest excuse for a detective to ever wash up in Martinaise, but at least that’s rarely a boring person to be.