Unwinding in an endless ocean

I play videogames for many reasons. Sometimes, I play for the story — the chance to visit new worlds and live out someone else’s life. Other times, it’s the sense of competition I find most alluring, or the chance to master a game’s rules and finally overcome its fiercest challenges.

But for every passing motivation to play games I have, I’ll always been in need of one that can help me relax. Something to take my mind off life’s problems, no matter how big or small they might be. Something I can get into for 15 minutes, or hours on end. Something that’ll last.

Right now, Endless Ocean: Blue World is that game for me, and what a gem it is.

I can’t recall exactly how I got it into my head that I needed this 2010 Wii title. Nothing against the Wii, but there are so many other things I could be playing, whether for work or for leisure. Maybe it was a postponed Hawaii vacation that left me daydreaming about scuba diving. I can’t be sure.

What’s important is I passed on the original Endless Ocean in favor of its sequel, which the internet rightfully told me to do. If you’re only now hearing about the series, take that advice too. 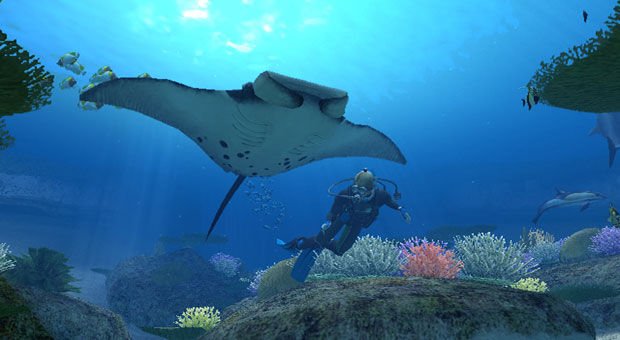 Blue World is a diving adventure game with a heavy emphasis placed on swimming around at your own pace, taking in the sights and sounds while exploring. And really, that’s what makes it so unbelievably relaxing: there is little if any frustration to be had. You can’t die. You can however chill out with a pack of giant otters in a South American river, or hitch a ride on a dolphin.

Now, don’t get me wrong, there are some horrifying, monstrous sharks lurking in certain areas — but they can largely be avoided. And, more importantly, you can electrocute (err, “pacify”) the shit out of them with your Pulsar device and go about your business. Even if that fails, the worst they or any other dangerous species will do is knock a bit of oxygen out of your tank.

You might think that’d be a big deal, what with oxygen being the life-sustaining necessity that it is and underwater videogame levels often being stressful, but it’s not. If you run out of air for whatever reason, you’ll just be taken back to your boat with no real consequences.

Remember almost drowning in Sonic the Hedgehog? This game is the opposite of that. 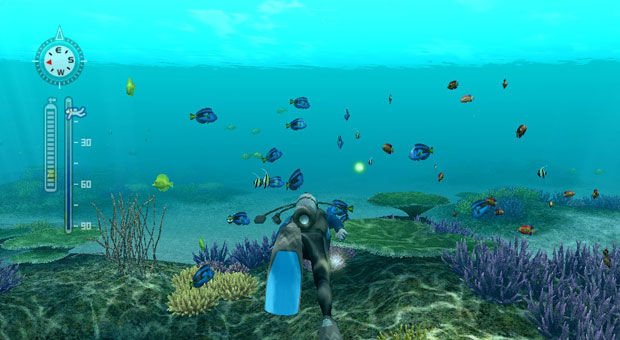 Occasional scary-looking sea creatures aside, Blue World is a peaceful, laid-back journey. The music, which features vocals — something not enough games are willing to adopt — is beautiful, even uplifting. Combined with the steady breathing of your player character, the audio will put you in a zen-like state, totally unaware of the passage of time. Feel that stress melt away.

Now, all of these feel-good descriptions are not to say you can breeze your way through the entire game. There’s a story — a sizable one at that — but completing it feels like merely scratching the surface. Then the real fun starts: there are hundreds upon hundreds of real-world species to find across sea and land; coins to collect; and pieces of treasure to salvage.

With or without the aid of online guides, finding all of that stuff would take … jeez, I can’t even hazard a guess. Certainly a long, long time. And that’s not even counting all of the other stuff packed into Blue World, like training dolphins, running an aquarium, decking out a private reef, taking photos, and giving tours. It’s JRPG deep, which is important because there are plenty of games that are inherently relaxing but not many that can keep your interest for 30+ hours.

Every step of the way, the game rewards you with new titles. I don’t know what the hell a “Temple Falcon” is, but I am one now, apparently. The positive reinforcement is appreciated.

Chad Concelmo said it best in his review of Blue World for Destructoid: “The game is harmless, pleasant, relaxing, and just makes you feel really good inside.”