Killin’ Goblins in the Name Of

It’s time again for your semi-regular look at the season’s best and brightest anime! Welcome once more to Japanator’s Anime Binge Log! Last time we took a look at the latest chapter of JoJo’s Bizarre Adventure, a show that, while not universally-liked, is almost universally respected.

This installment goes a bit deeper into the weeds with a show that managed to alienate a good chunk of its audience from the get-go: Goblin Slayer. Studio White Fox’s adaptation of the hit novel/manga stirred up a hornet’s nest of discourse with a divisive first episode, but what’s the verdict, now that about half its cour is over? That’s the question we posed to the staff and a couple of us deigned to answer!

If you’ve got a suggestion for the show to cover in our next Binge Log, don’t hesitate to tell us in the comments! 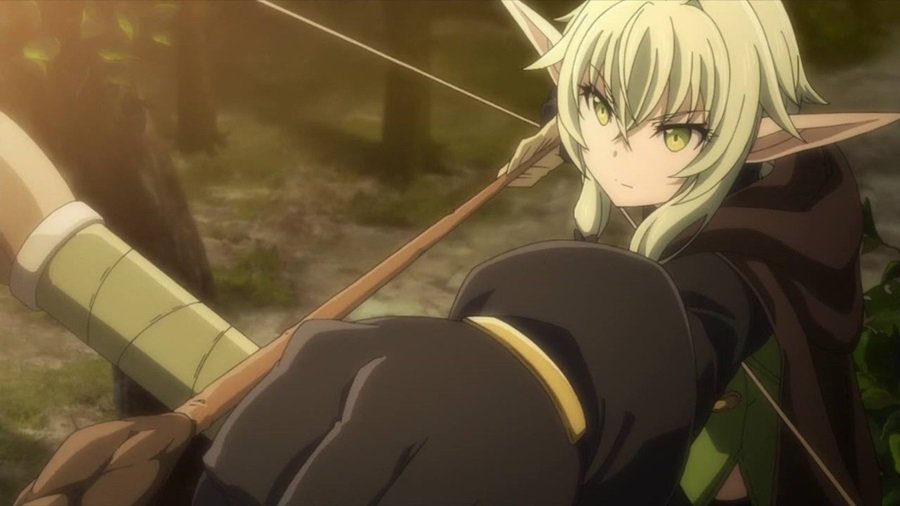 Oh boy, here I go with Goblin Slayer, one of my soft recommendations of the season. This is the series where I say I like it and when people ask me if they should watch it, I say, “Yes asterisk,” because I verbalize the asterisk that is the catch.

There are two sides to this asterisk. First is obviously the important part which, let’s be honest, you may not be reading this sentence anymore because you just gotta type a comment right now about the controversial rape scene in the first episode. I can try to say words, but ultimately I’m not eloquent enough to even begin saying anything about it. Let’s just say that I think we can universally agree that it was bad. In fact, the whole first episode, even barring the big oops scene is pretty bland and wholly disconnected from why I like Goblin Slayer. That part is the asterisk I mentioned. Everything I like about Goblin Slayer comes later and has nothing to do with the first episode. Hell, I don’t even need the part of the first episode that depicts the character, Goblin Slayer, as a badass, edgelord, goblin killing machine. Even that isn’t all that high on my list of why I like the guy.

Now I’m speaking as someone who is just watching the anime. Asides from the rape scene, the other things that pops up most often whenever Goblin Slayer gets talked about is how messy an adaptation it is and how the manga and then the novel are way better and have more to flesh out. But the thing that I like about Goblin Slayer so far as a limited anime viewer, is the characters themselves. Plus, these characters only get further developed from their respective mangas and novels anyways.

The hallmark is of course good old Gobby Slayer at the front. If you ignore the first episode, Goblin Slayer isn’t a huge badass. Adventurers around him think he’s a dirty, weird maniac who only kills trash mobs yet has the audacity to be considered a highly ranked, silver adventurer. He barely talks, barely interacts with people around him, and in general if you spend any amount of time with him you’ll either want to leave or just be creeped out. But that’s what the people in the show and even the viewers outside the show see. What I see is an autistic man who is living life to the fullest, on his terms. Clearly that’s just my interpretation, but the fact of the matter is that Goblin Slayer isn’t just disinterested with anything that doesn’t involve killing goblins, he’s almost incapable of it. He does try interacting with people, like trying their alcohol or discussing a plan, but it comes out so cringingly awkward, especially when he knows people around him get offended so he even goes so far as to further clarify his point after a conversation. That happens often when Priestess points out the problems in his plans and he simply replies, “I see. Ok then.”

Things pick up when a steady cast of characters get introduced, everyone only having their titles as named such as High Elf, Dwarf Mage, and Lizard Shaman. But not only do we see these demi-beasts bounce off each other, such as the natural friction between an elf and a dwarf, but we then see them interact with Goblin Slayer, who is barely human.

One point I see as a take it or leave detail is the hard fantasy. Plenty of people are turned off by hard fantasy because it’s been done to death already. Normally I’d agree, but Goblin Slayer even then doesn’t make it plain old hard fantasy. Goblin Slayer is straight up Dungeons & Dragons, right down to the dice being rolled in the OP. Magic isn’t some vague power but is a limited resource to adventurers. Goblin Slayer even asks the spellcasters, “How many spell slots they have left.” Lizard Shaman requires totems to be used in order to summon familiars, and a later boss fight involves the fireball spell in a context that is familiar to anyone who’s played D&D, particularly when one party member says to scatter but another replies, “To where?” because in D&D lore, fireball spreads out in all directions and even around corners for 20 or so feet.

Basically what I’m trying to say it, the real first episode is episode two. Throw episode one into the dumpster and toss a match in there, because nothing of value was lost.

Oh, also, before I forget, Goblin Slayer really needs some consistency on how they animate the character. Sometimes he’s respectably drawn and animated and you think he’s a proper character in a dark fantasy anime, and other times he’s this huge block of dark anime CG, and there’s no rhyme or reason when he shifts between the two. He will literally have a conversation with the adventurer’s guild marm (which should admittedly be easy to animate) then in the next scene as he walks to the side to talk to Priestess he’ll be CG. But then when he’s walking away to the door to leave, suddenly he’s animated again and not CG? Goblin Slayer isn’t just proficient at killing goblins, he’s also capable of switching between animation styles too. 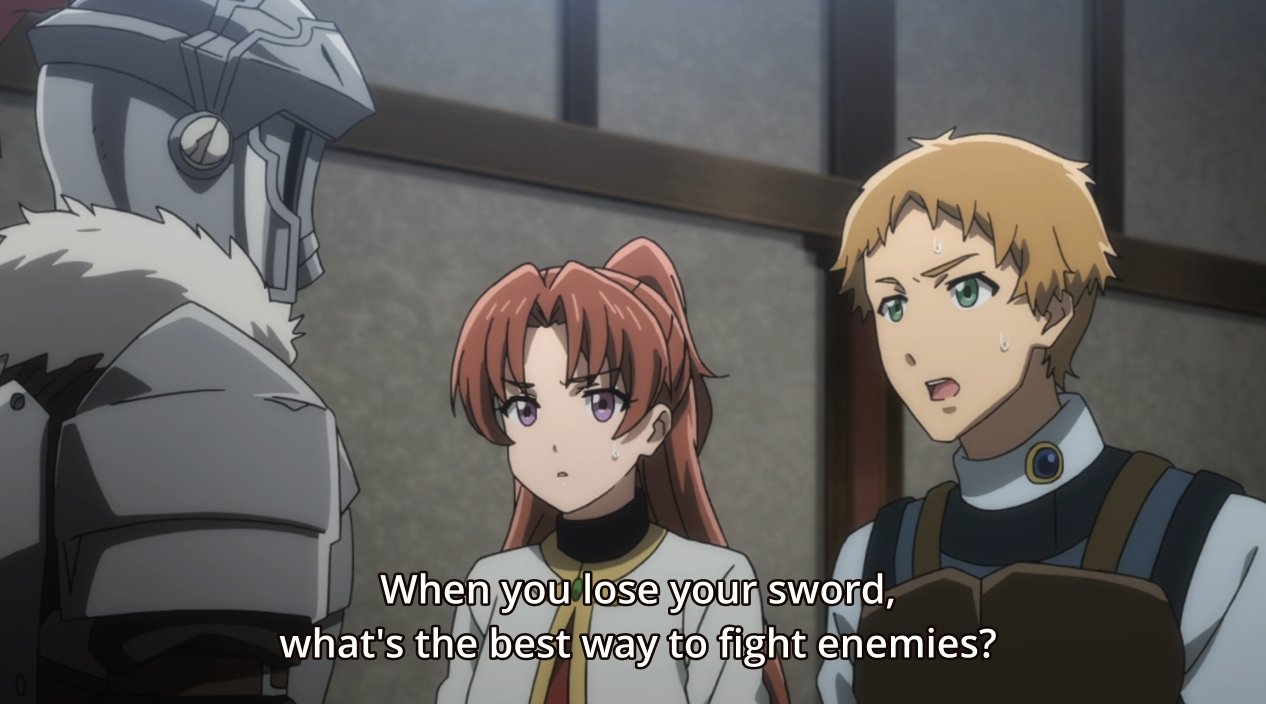 I’m right with Strider on this one: Chuck that first episode in the damn trash, because it frankly does the show a disservice. Contrary to what a public relations consultant will tell you, there IS such a thing as bad publicity, and Goblin Slayerbrought a mess of it on its own head with that first episode. I don’t blame anyone at all for being turned off the show by the big scene: It was graphic, shocking, and utterly transparent and cynical in its flailing attempt to establish the show as “dark fantasy”, where “dark” is the same kind of cringe-inducing edgelord BS that drives the likes of marketing campaigns for Dante’s Inferno(the game) or similar juvenile awfulness.

That said, that’s actually the worst thing about it, since the novel (I’ve read the first volume) establishes the edginess so much better, without having to use an explicit rape scene to do it. Given the same scene is in the manga, this is a classic case of a scene getting “punched up” for dramatic effect and resulting in unforeseen consequences. It happened to Marvel comics with the whole character of Hank Pym, and it happened to Goblin Slayerwith episode one. And for what? To emphasize that Goblins – a race that is almost never portrayed as good or even tolerable – are bad? That’s honestly as pointless as writing an op-ed in a Vatican newspaper titled “The Case Against The Devil” and thinking that’s a controversial take. 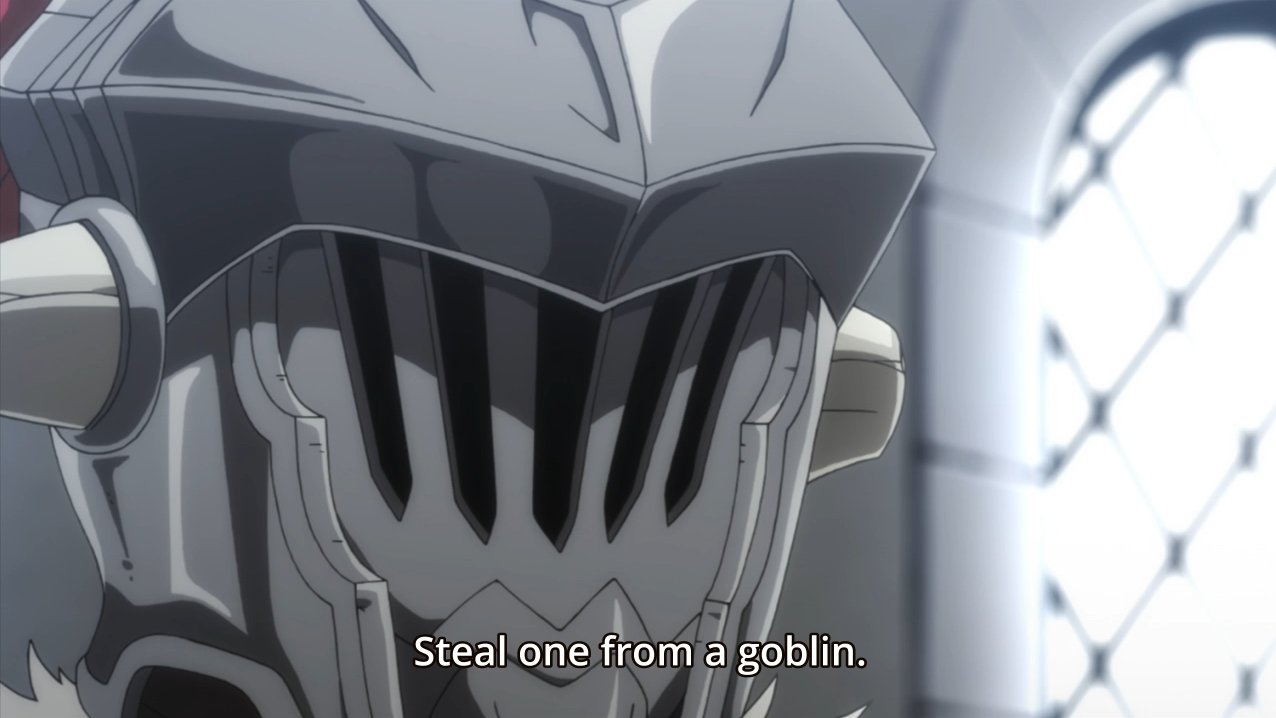 But enough about that. Goblin Slayeris a fun, atypical sort of misanthropic power fantasy that absolutely revels in how the character of the Goblin Slayer just isn’t like anyone else, for better and for worse. He’s strong, no doubt about it, but he’s not like Kirito, Goku, Superman, or Tatsuya Shiba. He’s not special, or chosen. In fact, other people are the actual chosen ones, and by episode five we’ve already seen a few of them – the characters who would be the leads in a stereotypical Dragon Quest-derived JRPG. Instead, Goblin Slayer’s hypercompetence is the result of his utter and complete dedication to the trade of murdering goblins. His expertise is clearly-hard-earned, but the show doesn’t pretend he’s any kind of aspirational figure. Occasionally it even deigns to hint that this dude with the cool helmet might not be right in the head.

Of course, the one thing it doesn’t want to do is make Goblin Slayer look genuinely bad. Like a badass, certainly, but not truly unappealing or unrelatable. Despite being shunned and mocked by the other adventurers, he still makes friends with a full party of competent people that desire his company. And his skills constantly land him in situations that threaten to take him away from the goblin-slaying he so craves, interacting with the fringes of the epic struggle against the Demon Lord. In its way, Goblin Slayeras a show is like Konosubafor peopel who think they’d do a better job than Batman.

And that can be pretty fun to watch, all thing considered. Just skip the first episode.