Ken Levine on the evolution of Elizabeth in Burial at Sea

BioShock Infinite – Burial at Sea: Episode 1 ends on an interesting note to say the least, and I’m curious to see what is in store for the next episode.

When it was announced, Burial at Sea: Episode 2 was pitched as being a survival-horror type piece of downloadable content, with the player controlling the story through the eyes of Elizabeth herself. I sat down with Ken Levine once again to pick his brain on this final endeavor in Rapture, and what it means for Elizabeth’s character.

In Burial at Sea: Episode 1, Elizabeth seemed a little bit jaded, if not completely cold, in comparison to her personality in BioShock Infinite. I asked Ken to elaborate on what’s happening with her character, and he explained, “In [Burial at Sea: Episode 2], there will be even more changes and each experience. It’s really about taking Elizabeth from the woman you met in the tower [in Infinite], this naive person, to the person at the end of Infinite who’s gone through some terrible things, [then] to this femme fatal, opaque, cold and then going inside and seeing what caused all of that.”

“When you get to the end of this, where does that leave her and what does this experience do to her? We basically want to show you the world from her perspective […] that’s a journey that you can complete only when you step into her shoes.” 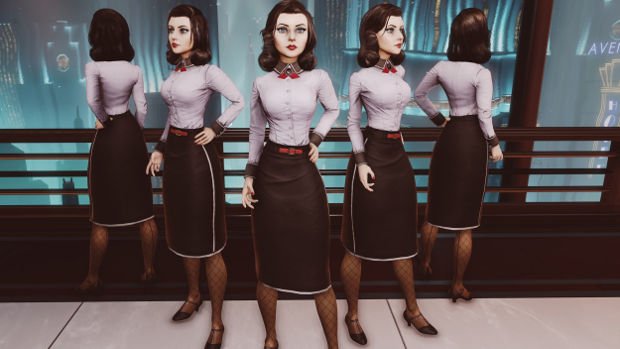 After learning about the “lighthouses” from BioShock Infinite, it can be confusing to understand where Burial at Sea falls in the timeline and how it fits into Elizabeth’s world. Ken Levine clarified that “This is ‘Elizabeth prime,’ this is the Elizabeth that went through the experiences in BioShock Infinite and this is the Rapture from BioShock. We’re not splintering that.”

Elizabeth’s combat style in Burial at Sea: Episode 2hasn’t been announced yet, but the gameplay will be more of the survival-horror variety. Ken elaborates on the gameplay that “It’s probably even more resource management intensive and stealth oriented. Elizabeth is a different person, she’s not a “guns blazing” person.

“Without going into too much detail, it’s the world through her eyes. Each game (BioShock Infinite, Burial at Sea: Episode 1) are bespoke experiences, we’re working on game experience stuff that varies from each of them.”

Perhaps we will be getting a completely different gameplay mechanic when we step into Elizabeth’s shoes. There is no official release date for Burial at Sea: Episode 2, but I imagine we’ll have our answers when it’s most likely released sometime next year.