Tripwire Interactive’s Killing Floor 2has had somewhat of a tumultuous Early Access. I’ve mostly enjoyed it from the beginning (it’s my go-to shootgame because it feels so dang good), but that’s not to say it’s all been smooth sailing. Some players were upset that it wasn’t ready for release in 2015, and others review bombed the game’s Steam page when cosmetic mictrotransactions were introduced.

Since the beginning of the year, the developer has been redoubling its efforts on making sure to communicate with the playerbase. The most recent update released last week, Tactical Response, shows the fruits of that labor are delicious indeed. 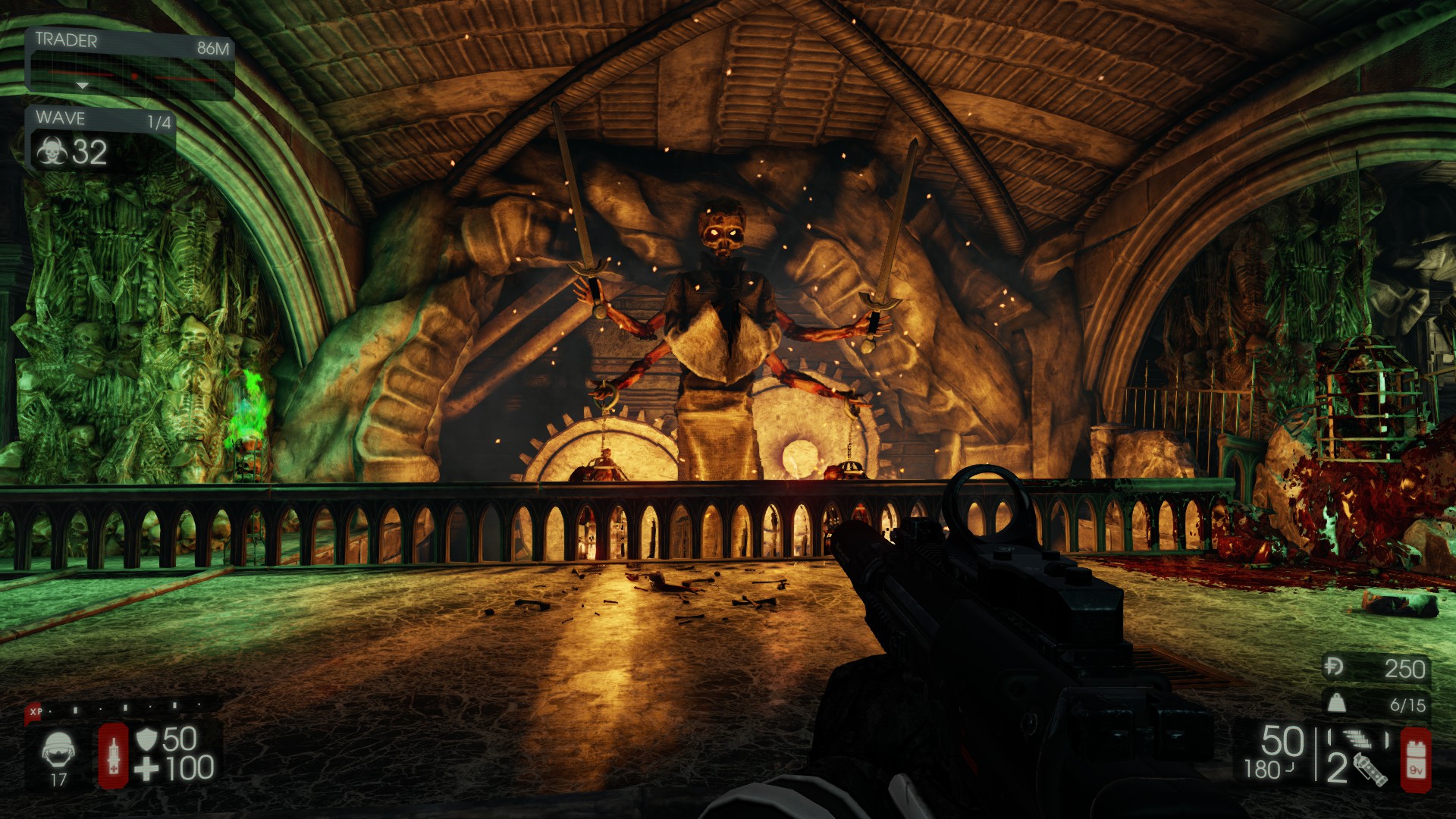 The main addition is the SWAT perk and the Infernal Realm map (made by modder Swift_Brutal_Death), but there is so much more here that rounds out the game in preparation for its November release. You can find all of the major changes on this page, but here’s a condensed list if you don’t want to click away from the beautiful Destructoid.com: loyalty pistol and armor skins for Early Access players, a better cosmetic drop rate, new achievements, and new Zed behaviors and resistances.

SWAT is all about fast-firing submachine guns (MP7, MP5, P90, Kriss Vector, in supposed order of effectiveness) and having a ton of armor. Tripwire’s gun pornography is on full display here, and as always, everything is fun to shoot. The only one that seems out of place is the MP5. It’s a second-tier weapon that seems like a bit of a downgrade from the MP7 in that it loses the nice dot sight, but it was recently made more powerful. That helps a bit, but I still usually skip it in order to go straight to the Vector, which is laser-accurate and helps to take down Scrakes like a champion.

Infernal Realm is a glorious little chunk of hell. There’s a giganticdoomsday clock that rings throughout the halls, adding ambiance to an already impressive level. Cobbled-together skeletons and corpses in cages hang about, and green flames flicker against the stone.I’m amazed that one person was able to build this whole thing, as polished as it is.

The loyalty skins seem to be a hit with many players that I’ve seen in the last few days. The pistol skins are a little bit too busy for my tastes, but the armored skin that makes you look like a futuristic soldier and can be worn by most characters is a cool bonus. I imagine a variant of it will eventually be for sale so players who buy after Early Access will be able to wear it too, but that remains to be seen. Cosmetic drops in general have been tuned to drop once a day instead of once every week, and supposedly better items will now appear instead of just cheap headband after headband. 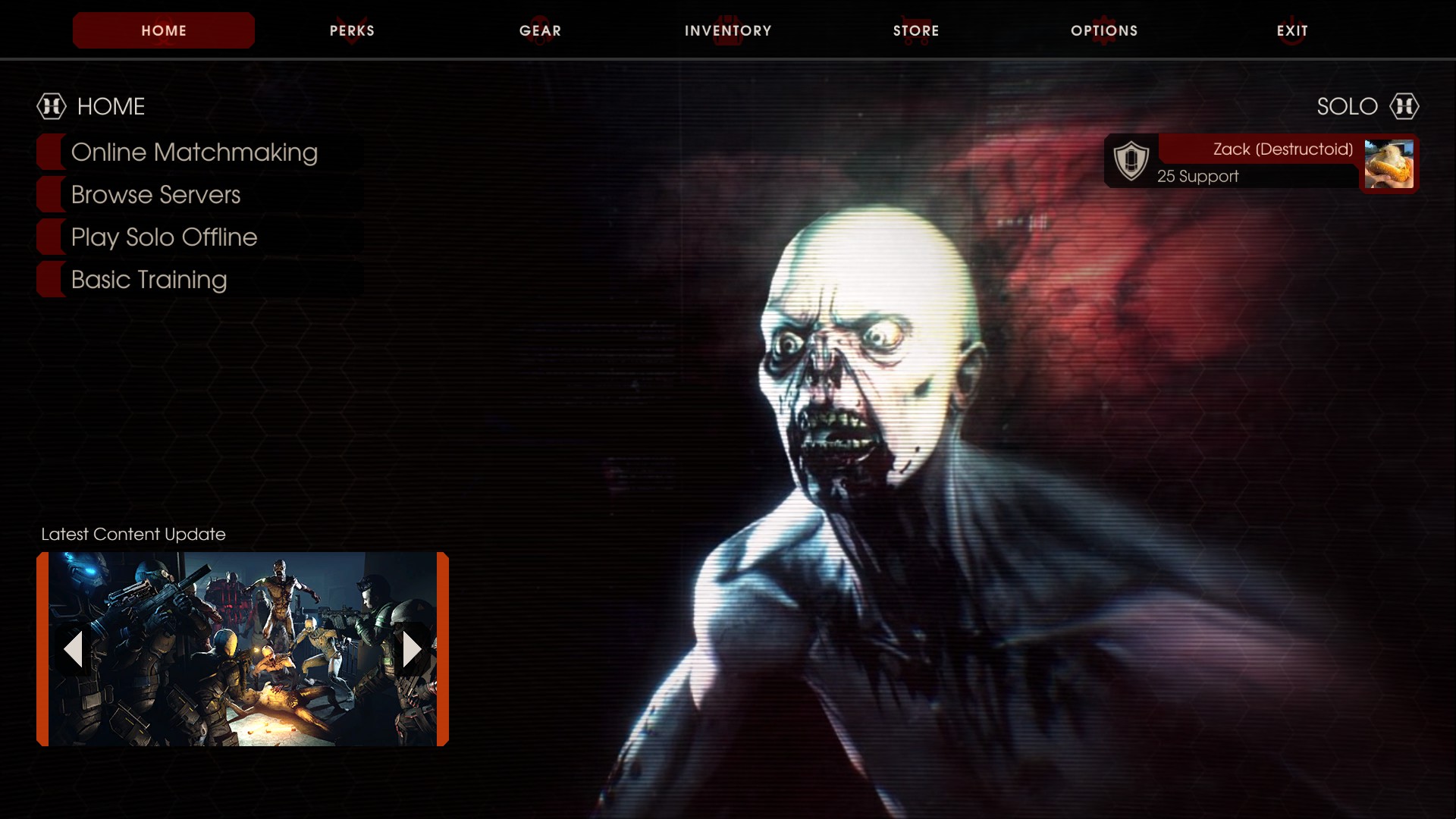 By far my favorite part of this update are the new Zed behaviors. All of the nasties that want to hurt you seem more eager to survive, dodging and defending themselves instead of walking straight into your bullets. For a time, higher difficulties like Suicidal and Hell on Earth just felt like faster versions of the normal game. Now, they’re a devilish treat, as crawlers skitter away when you aim at them and Scrakes block their faces with their massive chainsaws. New squads of enemies also spawn now, so you might get five Husks all the sudden, or a Scrake on a really early wave.This all adds up to a more organic difficulty that’s nice and tense, where I can’t predict how every battle will go.

On top of those big changes, there are smaller things that make Killing Floor 2 feel just about ready for release. On the title screen there’s a small portal that can take you to the official forums, to polls about current game balance, the Killing Floor: Uncovered short film, and other related material. It’s a smart move to get more people involved in the Early Access program, providing more collated feedback. There are also UI noises that make the menus seem more concrete. It’s the little stuff, folks. I’m also happy to hear the Fleshpound finally have a terrifying voice again.

It’s been a bit of a ride, but Killing Floor 2 is almost out. Once the tenth and final (for now?) perk is released, it’ll be November 18 and the PC and PS4 versions will be out for everyone to enjoy. I’ve gushed about the game a ton on this site, and as always I’m happy to play with anyone here. Let’s paint the town red.