Killing Floor 2 hasbeen available through Steam Early Access for almost exactly four months. Upon its initial release, I was already surprised by how fluid and satisfying the cooperative horror shooter felt. Cleaving my way through the evil Horzine company’s specimens kept me up for more than a few long nights. The only thing that kept me from continuing to play it constantly was the dearth of content; with only four perks (classes) and three maps, it’s hard not to feel burnt out after covering every square inch of every area in crimson.

Tripwire Interactive has been listening to fan feedback since launch, tinkering with the numbers and skill trees, revamping the audio, and adding more content on their way towards full release. All of these efforts have culminated in the Incinerate ‘N Detonate update. Goodbye, free time. 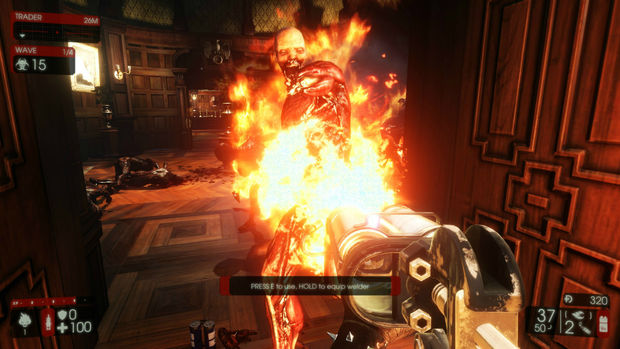 As per the name of the update, the main draw here is the return of the Demolitionist and Firebug perks. In the past few months, most available perks had trouble taking down sub-boss enemies such as Scrakes and Fleshpounds. If you didn’t have someone playing as Support with an AA-12 shotgun, chances are you weren’t going to survive (put your dicks away, I’m not saying it was impossible, tough guys). In such a team-based game, it felt odd to be pigeonholed in this manner.

Demolitionist fills a much-needed gap in Killing Floor 2‘s cooperative structure. Having the big guns necessary to tackle the big specimens feels long overdue, but it’s much appreciated. You’ll start off with sticks of dynamite, a utility knife, and the first tier weapon: the HX 25, a grenade pistol that may be my favorite in the entire game thus far. It launches a short-range horizontal cluster of grenades that explode on contact, and encourages strafing to properly group oncoming attackers. Having to change the way you move and think about lining up your shots separates this perk from the others in a pleasing manner. You have to reload between every shot, but the destructive power contained within more than justifies the increased pucker factor. 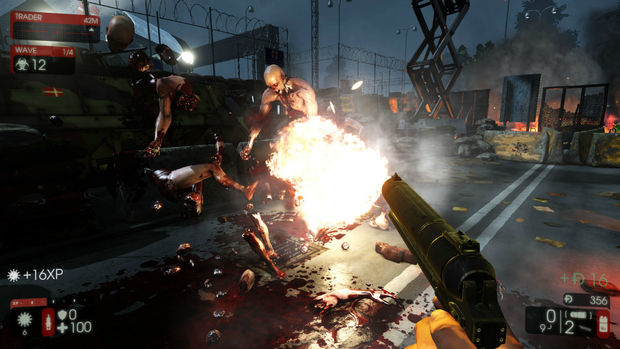 The second tier weapon is the C4, which I haven’t got much of a feel for yet. You can deploy up to eight of them and then set them off in the order you set them. I imagine creative players will have fun rigging doors to blow, but I usually skipped C4 to get to the third tier M79 grenade launcher more quickly. You don’t need to be as careful with this one as you do with the HX 25, since you can shoot from a farther distance. It doesn’t work very well in a panicked backpedal, since you need to have a certain amount of space between you and your target for the round to explode. You’ll still do damage with a dud round, but you won’t take out the group in front of you like you were probably hoping.

The final Demolitionist weapon is the RPG-7, which you’ve used in every game with guns ever. It’s welcome here, even if I miss the LAW from the original Killing Floor. It launches one rocket at a time, which makes a missed shot a painful experience. You’ll mainly want to save this for Scrakes, Fleshpounds, and the boss, Hans Volter. On a solo match I was able to take out Hans with three rockets, but they’ve already nerfed it somewhat since then. As much fun as it was to obliterate the boss so quickly, it’s better that they took it down a notch. Don’t worry, it still feels immensely powerful, just not ridiculously so. 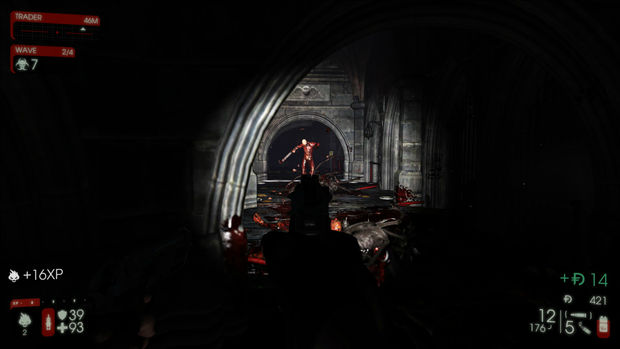 Perk skills for the Demolitionist include explosive resistance, being able to rig doors to explode when you weld them, and increased damage when using weapons from other perks. There seems to be less of a sure a build than with the previous classes. I only reached level six so I could only choose between supplying teammates with grenades and having my dynamite explode on contact. Even at this low level, I felt integral to every team I played on.

Firebug occupies a similar role to the Commando perk: you’re the garbage man, taking out the trash so your friends can take on the bigger meatsacks. You start out with Molotov Cocktails, a Fireman’s Knife, and a makeshift flamethrower called the Caulk ‘N Burn. It’s a caulking gun that emits a short-range stream of flame that cooks weaker Zeds in seconds. It’s easy to burn through all of your ammo before the wave is over but careful conservation eventually comes naturally. Once you have enough dosh (Killing Floormoney), you can get the Trench Gun, a pump-action shotgun with incendiary rounds. This is the only weapon in the update that feels a bit underwhelming to me so far. The flame rounds are pretty, but feel ineffective.

Next up is the Flamethrower, which is as enjoyable to use as I was hoping. Watching the never-ending onslaught of Zeds charge through your wall of flame only to keel over just in front of you remains a pleasurable (demented, horrible, what’s wrong with me) experience. It sort of invalidates the Caulk ‘N Burn though, since it’s better in almost every way. The star of the show is the fourth tier weapon: the Microwave Gun. This high-tech laser beam feels straight out of Turok, replete with the oh God grossgore. It heats up enemies, covering their skin in what looks like gingerbread dough, making them expand until they just…pop, leaving entrails and other viscera strewn about. 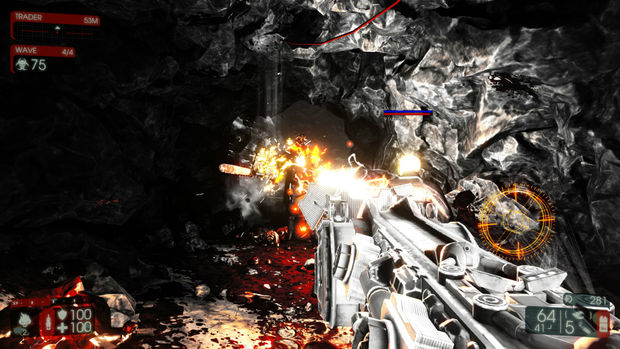 Some of the Firebug skill choices seems obvious: why would I choose to Flaritov (Molotovs become better light sources in dark areas) when I could have Fully Stocked (purchased weapons have full ammo)? Later skills seem more difficult to pick from, such as when you have to choose either increased range or splash damage. I wasn’t able to try any of these skills, so maybe I’ll be singing a different tune in a few weeks.

Firebug, while entertaining, can’t hold a candle to Demolitionist. I like having more options so I appreciate every perk, but a class that specialized in bosses was sorely lacking. I see myself rocking the grenade pistol for quite some time.

And that’s just the perks! The two new maps, Evacuation Point and Catacombs, are vastly different from each other. Evacuation Point is a more urban environment with plenty of open spaces and long tunnels to funnel Zeds through. There are only a few areas that you can get cornered, and there always seems to be an escape route. Catacombs is my new favorite map. It’s an Ossuary under Italy, with tight corners and almost no light. It’s the first map where every light can be shot out or accidentally blown up, and tension runs high when you can’t see anything. It’s fortunate then that one of the new perks is about creating meat torches, no?

There’s a host of other improvements that continue to make Killing Floor 2feel more finished than the average Early Access title. The reworked audio includes meatier sound effects and also adds additional hit markers on the enemies. Whereas before there was really only a difference between head shots and body shots, metallic implants on the Zeds now make clanging sound effects. Shooting Hans’ power core on his chest now does more damage than body shots. It’s nice to be choosing to shoot somewhere other than chest or slightly above the chest. 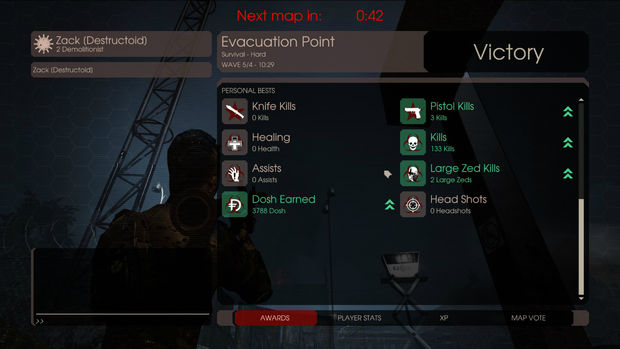 Upon ending a match, whether by defeat or victory, you’re greeted with a results screen. Awards are handed out for various achievements such as killing the most specimens and getting the most assists. You can see which team member is doing the most damage, and how much experience you earned for each perk. Map voting has now been implemented as well so players can actually choose where they’re going for the next round.

As if Killing Floor 2wasn’t gory enough, there’s now the optional Nvidia FleX toggle that simulates soft tissue and fluid interaction. Just wait until the first time you launch a grenade into a group of Zeds and see the satisfying meat explosion. Do I sound crazy? I sound crazy. You need a beefy graphics card to handle FleX on high (they recommend a 770 or higher, which is what I’m rocking), but even with the extra giblets abound I didn’t see a performance drop.

If you want to get close to all that gore, you can try the new Berserker skill tree. Since the perk was underwhelming at launch, it’s been completely re-worked. It has more damage resistance and you now have to choose between being stronger with normal strikes or doing massive damage with counterattacks. Since I’ve seen both styles of players, I know these changes will be appreciated. I still haven’t mastered the parry. Some Zeds now have unblockable attacks (denoted by a fiery outline on their weapons) so Berserkers will have to stay on their toes. Berserkers (as well as Commandos) also have night vision instead of flashlight now. No more ‘wasting’ a skill slot!

Dual pistols have also made their return, though the Gunslinger perk that will utilize them has yet to be implemented. Using their ironsights feels great; instead of holding your hands out a little further to zoom like the previous game, you aim with your right hand while the left remains in place. While the concept of dual-wielding is and will always be silly (he said while previewing a game with mutants taking over Europe), it’s a great compromise. 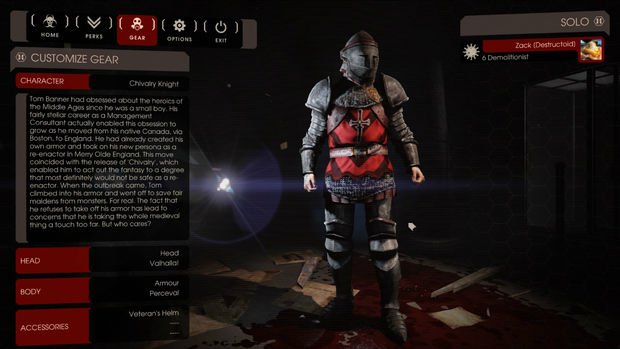 There are two crossover characters for players who own Red Orchestra 2 and Chivalry. The first is Anton Strasser, a soldier of the German Wehrmacht. He was cryogenically frozen by Hans Volter during World War II and now he’s pissed. The second is a LARPing knight who played too much Chivalrybefore the Zed outbreak (seriously, that’s what it says in his bio). He comes with his own unique weapon for the Berserker perk, a Zweihander that easily cleaves through Clots. As long as one player has this character, he can share the weapon with anyone on the server. This way the crossover bonuses are purely cosmetic.

In a cool final touch, when Hans comes out for the final wave, he’s introduced with a title card and a strategic hint. It’s minor, but makes him seem more imposing. I look forward to when there are multiple bosses on rotation and each one gets their own little introduction.

The Incinerate ‘N Detonate content update is a shot in the arm for Killing Floor 2. Since the only problem I had with it before was that there wasn’t enough to do, this was exactly what I needed to put it back into my regular rotation. While we don’t yet have the release date for this update, it shouldn’t very far from now. It’s now in the QA stages, so as soon as final balancing touches are in place, it should be in your hands. I’m happy to say it was worth the wait. Now if I could just get the Sharpshooter perk back…