‘This game is a big testing ground’

As you could probably tell from my review, I was blown away by King’s Quest: A Knight to Remember. I went in with very little in terms of expectations and at the end of it, I was looking at a Game of the Year contender.

Spurred by my enjoyment of the first episode and my withdraws for more tales, I had a chance to chat with Matt Korba, President of The Odd Gentlemen, about the development process, inspiration, and future possibilities. 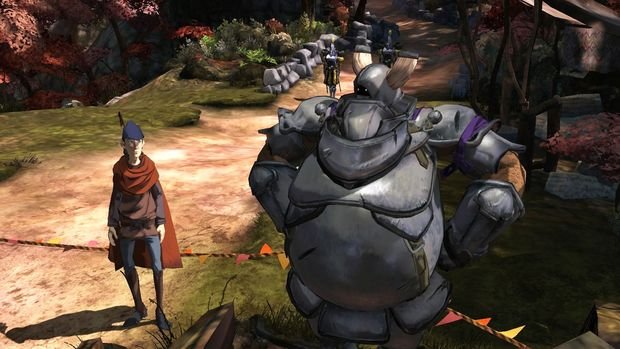 Destructoid: Can you give us a bit of background on the history of The Odd Gentlemen and the acquisition of the King’s Quest rights? This is a rather long story but I’d like to hear it from your perspective.

Matt Korba:Many people have tried to bring back King’s Quest over the years, in many different ways. Our game and concept was built from the ground up, so besides public knowledge I don’t know anything about the direction other teams wanted to take the series. What I doknow is that a little over two years ago, Activision was looking to fund and support a development team to reimagine King’s Quest. They put out a call for ideas to various studios. I had been meeting with Activision since I was a student working on Winterbottom about possible collaborations, but it wasn’t until King’sQuest came along that we found a match.

King’s Quest is my favorite series of all time so you can imagine how excited I was for a chance to bring the classic series back to life. I met with Lindsey (our producer) and Evan (our art director) on the roof and we put together a pitch over a very long lunch for what we thought would be an interesting direction. It centered on King Graham as a very old man sharingstories from his past with his curiousgranddaughter Gwendolyn. Atthe time we were only nine people, but Activision loved our creative pitch so much that they took a chance on us. This rarely happens in the industry.

It was a big risk for them because, they could have gone with a larger team, or a team that has shipped more titles on more platforms, but they decided to go with a small team that had the best creative (and the biggest KQ nerd). I amexternally grateful to them for that. Fromthere, Sierra wasbrought back, they fostered the growth of our company and here we are today.

What lead to the choice to include action sequences in this new rendition? I particularly liked how everything wasn’t just a QTE.

The original directive was to reimagine and update the classic series for a modern audience. But, for us that wasn’t a good enough reason to include small actionsequences. One of themost important parts of a good adventure game is pacing, and for us we are always trying to strike a balance between gameplay, story, and art. If we were going to include anything it needed to serve that purpose. The action sequences help to break up the pacing and keep it interesting. When we put an action sequence in the game it usually has a puzzle element,branching choice, or a story pointto it.

We decided early on that if something can be played it should be, as opposed to watching a cutscene. Thistheory is not new to our game, the classic series mixed things up with action as well. The early games even had jumping and swimming controls.Remember climbing the beanstalk in KQ1 or the whaletongue in KQ4? The games felt pretty dangerous when you had to time a clickjust right before a wolf ate you or to throw a pie at an attacking yeti in KQ5, and of course using the arrow keys to avoid the paths of monsters added tension to the exploring. 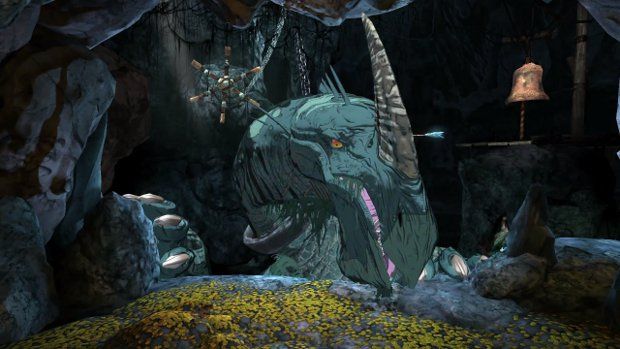 Will we see the same cast of characters, notably the knights, pop up in other episodes?

The game takes place over thelifetime of Graham. That means that notonly does much of the cast return, but they age as well. Players will get to control Graham from a young squire to a very old man. Each chapterwillalso introduce new characters.

How was it working with the voice cast? I noticed that all of them seemed to have a lot of fun based on the strong performances.

It was anamazing experience. The fact that we got all those people still baffles me. Our casting director Eric Weiss, did aphenomenaljob of getting together a great cast. There were few occasions where we had placed a sample voice clip into our casting doc and Eric would just say “Why don’t we just cast that person”.

To which we would say “Huh? We can do that”? We had done some small VO work in the past but this wasdefinitelya hugelearning process for the whole team. I think ingeneral the cast got excited, because games like this don’t come around everyday. This was astory filled with charm andhumor, theywouldn’t need to record 500 stabbing exertions or one line taunts.

Can you tell us a bit about the inspiration for young Graham’s mannerisms? I noticed that he seemed familiar when he’d get really excited about something.

The inspiration for him was really only the classic series. With other characters I can say, oh Groucho Marx inspired him, or Monty Python inspired them, but Graham was difficult. We wanted to allow Graham to growinto a hero. Wedidn’t think it would beappropriate for a Graham to be a traditional “Bad Ass.” We have seen enough characters like that already.

We looked at the classic series and knew where we needed to take him, so we worked backwards. I wrote this line early on to describe Graham and everything stemmed from there. “While other knights returned fromtheir quests trailing bloody victoriesbehind them, Graham returned with friendly dragons and yeti companions.” Oh, and silent film, we pulled a ton of hisphysicality from the silent film greats; Chaplin, Keaton, and Lloyd. 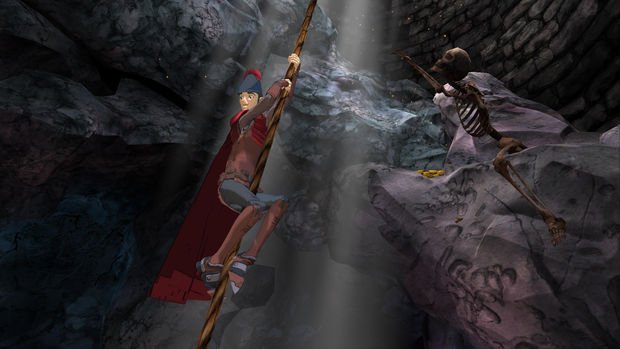 Do you have any sort of timeline in mind for future episodes?

We want to make sure the games are great and of high quality. When weannounce the schedule I think people will be impressed. This is not a game you will have to wait a year in between chapters.

Was there any consideration in terms of developing for Wii U?

If the game does well it candefinitelyend up there as well as some otherplatforms. But, we are still arelativelysmall team and 5 platforms at launch almost killed us!

Just in case you haven’t heard this yet, I feel like I need to make the case for the Land of the Green Isles (I saw the tapestry Easter egg on the wall in the castle). Is there a chance we may see them and some Alexander adventures in the future?

Season 1 is focused on Graham’s adventures, but if there is a demand for it anything is possible. That said some of your favoritecharters just might be comingback in future chapters.

Likewise, if you can answer this question, where does the series stand on re-releases of the classic entries?

This game is a big testing ground for many people. If it can prove that there is still an audience for this type of game at this type of scale, then I think it opens manyopportunities for us, Sierra, and other development studios as well.