What is dead may never die

Today, Blizzard dropped Leoric the Skeleton King, the newest addition to Heroes of the Storm. He’s a melee Warrior with one very intriguing trait, and has a heavy amount of lore to draw upon from the Diabloseries.

In short, he’s a perfect candidate for the game, and Blizzard has been on a roll since debuting Kael’Thas, Johanna, and Butcher respectively. 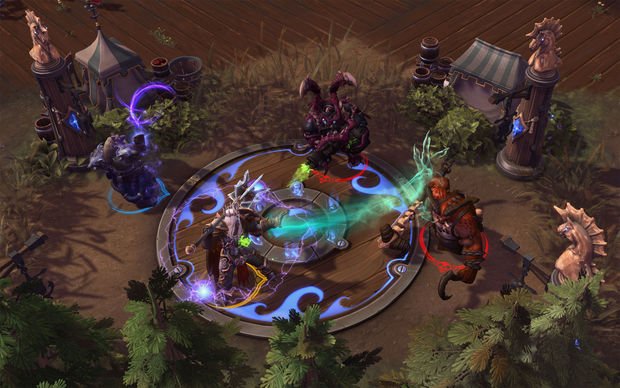 Leroic’s Q is a simple bash called Skeletal Swing, and would be extremely boring if it didn’t do double damage to minions and cause a slow. Because of this, it has a lot of utility in terms of clearing waves and chasing or escaping. It also has a muchlonger range than I thought it would with a giant modified cone (you can spec it to reach even more distance!), and can go through gates/walls. Not to mention the fact that it’s perfect for clearing out smaller creeps in the mines and garden.

Drain Hope (W) is a bolt of sorts that allows him to heal, which helps his viability as a warrior class and adds some range to his kit. It only works on heroes, just like Thrall’s wolves, so he can’t just heal himself in any circumstance — plus, he needs to maintain a specific distance to channel. Wraith Walk (E) is a really cool teleport, which lets Leoric become unstoppable for a few seconds and phase shift a short distance. He’s much more mobile than a lot of other heroes because of this, but his body is vulnerable while he uses it. As you can see, most of his abilities can be countered.

In terms of his Heroics, Entomb is a good way in theory to guarantee a single enemy death (it literally causes an impassable tomb to appear), but after extensive testing, I’m going to say that it’s just straight-up not very good. It’s a little tougher to aim than Butcher’s Lamb to the Slaughter, and it’s easily countered with a quick Bolt of the Storm or any teleport right towards the open side. His other Heroic, March of the Black King, is likely going to be the top pick by most people. In essence, Leoric whacks everything in front of him in rapid succession, which causes him to heal while he’s at it. It’s an amazing initiation, as most enemies will likely have to run away from its fairly big area of effect, lest they allow him to heal.

Ok, so it’s a fairly easy-to-grasp kit, but his trait is really where he shines — even when he’s KOed, he doesn’t technically “die,” and can still persist on the battlefield as a wraith. He doesn’t do direct damage, but he can use his abilities to reduce his death timer, and return to the board wherever you happen to leave his ghost. Because of this, Leoric has 100% uptime. Now, rising from the dead isn’t a completely new MOBA concept — it isn’t even new to Heroes(Uther) — but since the entire character is built around it and he can do it at level one, it makes for some very interesting gameplay.

I love how a lot of his traits are built to work for both variants, and you can even hearth back to base while “dead.” It obviously works best with specific objectives, like the Dragon Shire shrines, where you can come right back while the enemy is low on health. Since you can clearly see his ghost as an enemy, it’s easy to plan for his resurrection, but the vision his death form grants is a huge factor.

When I played the Butcher the day he debuted, I could tell he was fairly balanced with only 10 or so games under my belt. He has a pretty straightforward role, and there are a multitude of counters you can use against him so long as the enemy team is working together. With Leoric, it’s muchharder to tell where he fits in the current meta, and whether he will need buff or nerf tweaks long term. He’s not particularly bursty until later levels andhis deaths do grant full kill bonuses for the enemy team, so I can see a lot of players being reckless at low-level play to balance him out in Quick Match. Additionally, he’s slow in general, doesn’t quite feel as sturdy as some other dedicated tanks, and all his cooldowns take a while to recharge.

Right now, I’m fairly happy with where Leoric is at, but again, it’s too early to tell what plans Blizzard has for him and if he’ll end up being a viable hero in the future. We’ll have to keep a close eye on his win rates.