I likeLightning Returns: Final Fantasy XIII. I dug it from our very first hands-on preview, and I’m now I’m digging it even more after playing the new Tokyo Game Show floor demo.

Some felt that the first preview was a bit linear. Linear is a scary word after seeing how players reacted to the first Final Fantasy XIII game. But this new gameplay show here was totally open and free to explore. Oh, and I saved a chocobo’s life. That’s a pretty good day in Final Fantasy world.

As you may have heard, the third and final Final Fantasy XIII game changes things up a bit, with an action-type battle system replacing the more traditional system of the previous two. Parties are also gone — it’s just Lightning and all of her crazy costumes and silly poses.

I liked the old battle system, but I really like this new one too. It does take a bit of getting used to, though. Lightning is free to move around the battle field and choose any attack from a selection of commands, and they’re executed immediately, much like an action game. These commands are contained in three equippable combat styles, each with their strengths and attributes. Oh, and each comes with a different costume for Lightning.

These costumes are getting a lot of heat, but I think series fans are taking some of this stuff too seriously. Plus, the costumes showed in this TGS demo were neat. One has Lightning as a sort of dragoon, just like Kain Highwind from Final Fantasy IV. Her costume is a treat for fans with its dark purple metal and trademark arm spikes, and her air-to-ground spear attack would make Kain proud. I think fans are really going to like some of these costumes. They’re not all senselessly pervy.

Back to the battle system. When used, each command depletes its combat style’s gauge a given amount, forcing players to jump to another combat style until it refills. Successful fighting involves bouncing from one style to the next, exploiting weaknesses while keeping the hits coming. Again, it’s weird at first, but you’ll soon enjoy how fast and free it is.

We’ve talked about the battle system before, but our experience with it came in a pretty linear slice of the game. But the Tokyo Game Show demo is happy to show off just how open the game is. 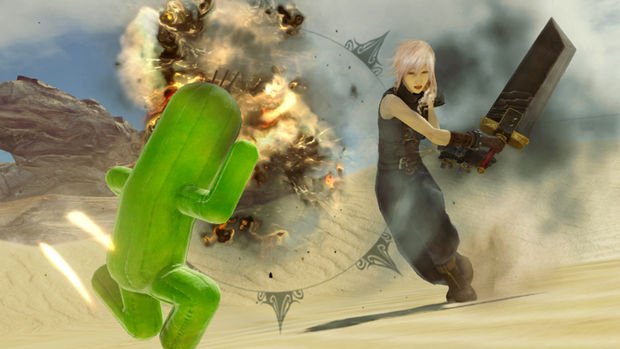 There was a quest to follow, but I went exploring first, running around the lush countryside that surrounded a village called Canopus Farms. Green covered hills served as a backdrop to gorges filled with ruins. Sunlight served to highlight chocobos and their riders traveling in the distance. Scaling the world up for Lighting Returns to make it fit in with current open-world games couldn’t have been easy, but Square Enix has done a nice job here. What a pretty game.

Canopus Farms is a small village, but I was able to check out some of Lightning Returns‘ new world features there. Walking about town is easier now with Lightning’s new jump ability. I hopped fences and other objects you’d normally have to walk around. There are vendors that sell time and food now, too. I grabbed a pudding at a snack stand to refill my HP after some field battles.

When approached properly, encounters in the field can bring you temporary battle bonuses. Like in Atlus’ Persona series, Lightning can swing her sword at a field enemy to gain perks like 10 percent more hit points or a speed boost. On the other hand, missing gives you a temporary penalty to deal with.

I hacked away at Puchineros and Gremlins in the field to get back into the battle system — it’s just as fun as I remember. Larger enemies had me using a bit more strategy. Lightning’s status debuffing combat set let me bomb these guys with speed and defense debuffs to wear them down before polishing them off with swords and spells.

Meanwhile, Hope gave me guidance on my quest, which had me seeking out this legendary chocobo. Riders I met along the way warned of some danger, and just beyond them was a large beast that seemed to be blocking my access to something behind it. This monster was quite a bit harder than the field enemies, requiring me to use Lightning Returns‘ new Overclock ability to stagger him a few times. Though the action in battles continues without interruption, I found it interesting that you could hit the Start button to use some readied items. This battle had me using all of my remaining Hi-Potions before finishing it off. 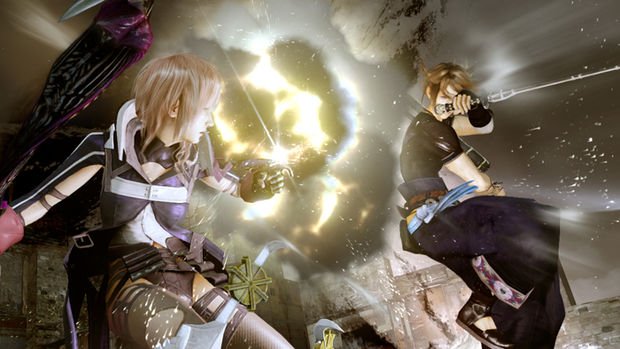 It turns out that this monster had harmed the legendary chocobo. The following cutscene was sad: a white chocobo lay trembling on the ground, feathers stained with blood. Before you start crying, know that I saved it. Villagers took it back to Canopus Farms and nursed it back to health. I won’t ruin it for you, but you come to know this particular chocobo as the story continues.

This TGS demo for Lightning Returns was just another small slice for us, but I’m pleased to see just how open and freely explorable it is. I have still have concerns about the story, but there’s enough exciting stuff going on outside of the story to keep us entertained. It’s still Final Fantasy XIII, so take that as you will, but Square Enix’s approach is so different here that I think fans are going to be pleased.