The scariest part is how little you care

[Good news, everyone! We’re giving out Lone Survivor Humble Bundle and Wii U eShop codes on Sup Holmes today at 4pm EST. Today’s guest is Ron Gilbert (Maniac Mansion, Monkey Island). Chuck the Plant appears in both Lone Survivor and Maniac Mansion, so it sort of makes sense, at least to me.]

Lone Survivor: The Director’s Cut has been out on PSN and computers for a while, though it just made it over to the Wii U a few days ago. This post was originally going to be an impressions piece on how the Wii U port came out, but before I knew it, I’d gushed about how the incredible levels of nuance and sensitivity that game applies towards the depiction of psychosis that I had to change course. It’s a good thing too, as there isn’t much to say about the Wii U port other than “it’s got remote play and it’s nice to be able to plug your headphones into the Gamepad.”

Jasper Byrne, the one-man development team behind Lone Survivor, must know more about psychosis than what you can learn from TV and movies. That’s the only way I can imagine how he pulled this off so well. 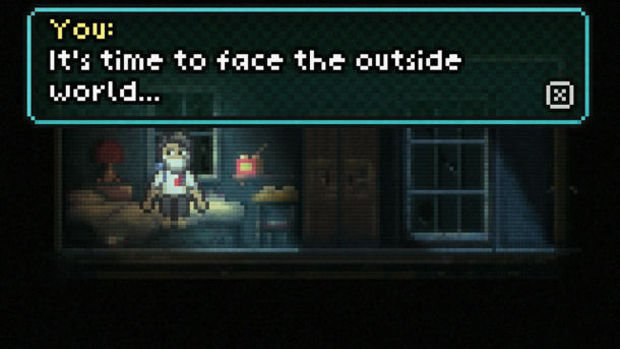 Then again, we all have first hand experience with psychosis. Most people become psychotic at least once every 24 hours. Dreams are psychosis. Your body becomes paralyzed while you’re dreaming, in part so you won’t be able to act on your psychosis. Our bodies shut down so that our meat and bones can rest, and so our minds can break loose from all the strain it takes to sort out our day-to-day reality.

When you’re dreaming, you hear things, see things, and believe in things that could never happen in real life. Sometimes this feels a little weird, but a lot of the times, it all seems totally normal. The same is often true with psychosis. Talk to someone who’s actively hallucinating and/or delusional, and they may tell you that there are vampires living in the walls, eavesdropping on your conversation. It’s likely that they could explain this to you with the same casual tone that they’d use in telling you what they had for breakfast.

Delusions and hallucinations are leaks of information that seep into the front of our minds from our brain’s back-up storage drive, otherwise known as the subconscious. That’s part of why people suffering from delusions often don’t think their delusions are that surprising, or that their delusions might not be reality. The fact that there are vampires in the wall is not really new information to them. It’s been in their subconscious all along. Delusions are rarely epiphanies. They are almost always just dusty old data being processed in a new place.

Lone Survivor‘s protagonist (and by proxy, the player) shows this kind of casual acknowledgement of unreal situations from the very start, both in dreams and his waking life. Instead of questioning why a man with a cardboard box on his head is staring at a corner, he focuses on the delicious espresso on the table. He doesn’t seem to care who the espresso belongs to. He just chugs it down, unconcerned with his surroundings or the ramifications of his actions. Not long after, he faces a naked, gyrating, unnatural man-like thing. He regards it with the same resigned attitude that he approached the espresso, or in the same way Mario might mutter “whatevs” as he crushes a giant flying turtle under his feet.

The protagonist’s demeanor doesn’t come off as unusual at first. In the context of a videogame, it makes sense. Videogame characters are notorious for having resigned, nonchalant reactions to completely unbelievable situations. Solid Snake meets a man that levitates and read his mind, then he kills him. He doesn’t seem particularly surprised.The characters in Resident Evil witness the dead coming back to life, and their response is “What? What is this? Well, we better find some keys so we can unlock a door or two, and maybe get ourselves out of this mess!”

Being unimpressed with the impossible is something that a lot of videogame characters share in common with those suffering from psychosis. Its so common in games that we often take it for granted, but if you step back and look at them, it’s clear that they’re not “in their right minds”. 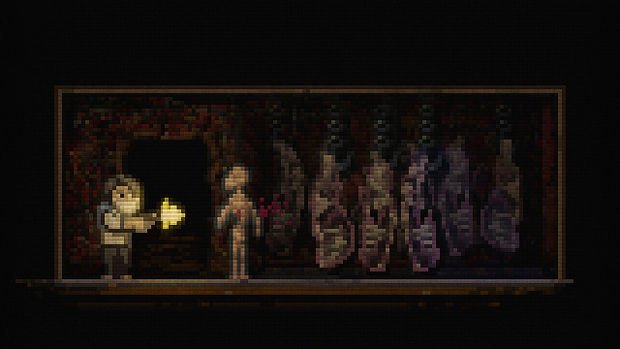 What makes Lone Survivor‘s protagonist different from other pseudo-psychotic game characters is that when he is faced with little peeks at reality, he doesn’t know how to handle it. His everyday nightmare world isn’t that scary or confusing to him, but talking to a few people at a party is. Living in apocalypse feels right, but a “normal” conversation does not. No wonder he feels like the only “real” person left. His ability to feel close to anyone is being completely disrupted. Surviving a life filled with flesh eating monsters may be a challenge, but having small talk with a guy named Benzido feels impossible.

Maybe that’s why he’s not motivated to try to “wake up”, and instead spends most of the game delving deeper and deeper into his own mind. He has the opportunity to walk among distorted memories and the abstract symbolic visualizations of his psyche in the same way your average person might walk through a hallway. Not only are “real people” hard for him to relate to, but they’re also pretty bland compared to the places he can go without them. 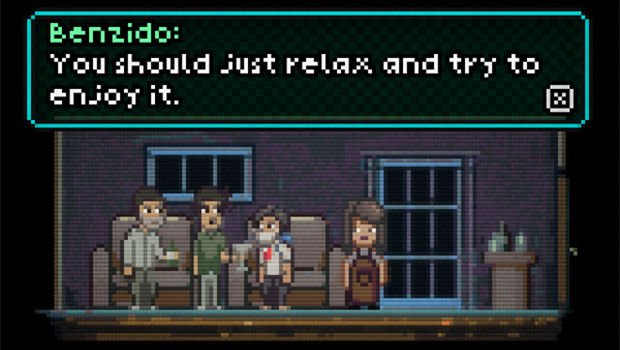 As the game progresses, he uncovers more and more disturbing and fascinating pieces of himself. He engages in moments of terror, and then satisfaction, as he dodges or destroys the revolting threats he’s faced with. Everything is gross and awful, but he (and by proxy, the player) can’t help but enjoy himself in this world, at least in the moment. Compared to the dead bodies and revolting freaks around him, he’s a hero. He’s got it together. He’s succeeded in staying alive where everyone else has failed. Grandiose and paranoid delusions tend to make you feel that way.

Things get genuinely difficult when he’s forced to question if his own actions are justified. These moments of self-reflection are difficult to understand, uncomfortable, and rarely offer concrete answers, which is probably why he tends to avoid them. Instead, he marches forward. Shoot the monsters in the head! Eat an entire ham you found in a random apartment!Take some pills out of someone else’s sink! It’s all totally fine. No reason to feel guilty if everyone real is dead and the only one in danger is yourself. There may be guilt in other places though, in those random flashbacks of a woman, in the relationship he has with that doll, but certainly not in all the pills he’s swallowed and all the things he’s killed. 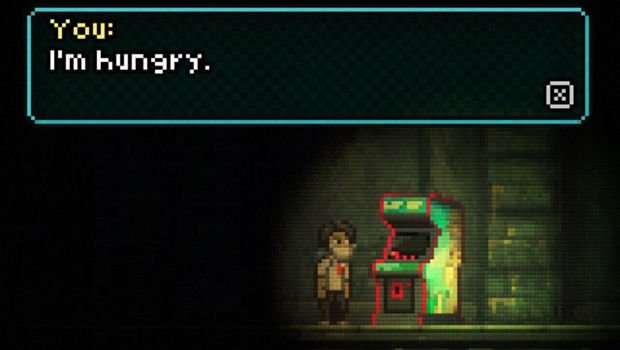 Though the game never tells you this, what you kill and what pills you take actually does matter. It’s easy to run into the game and try to see and do everything as fast as you can, experimenting with whatever you encounter and exploring your ability to survive in as many ways possible. This is also something someone with chronic psychosis might do. Acting on their delusions and fascinations comes first. Making sure they are eating right, getting enough sleep, and other niggling responsibilities we must attend to in order to stay healthy becomes an after-thought. You can only worry about so many things at once, right? There is a giant throbbing human heart coming out of that wall. That’s interesting. The battery in your flashlight is dying and there are monsters in the apartment next door. That’s scary. The fact that you haven’t eaten all day is something you can worry about later, but of course, that later never comes That dismissal of basic human needs is reflective of the real underlying problem that the protagonist in Lone Survivor is up against.

This is yet another way that the gameachieves a more accurate depiction of psychosis than most other media has ever accomplished. The things that matter to the protagonist, and often times the player, are not the things that he really needs to stay alive. Boring priorities like making sure you drink water every day, that you get enough sleep, that you don’t give in to your instinct to kill every time you can, that you overcome your fear of emotional vulnerability and commitment, are all likely to be ignored. If they are, you’ll get one of the “unhealthy” endings. which is likely for anyone on their first play. There are no in-game prompts on “how to win,” here, and no clear rules to follow. You have to learn from your experiences, which is why I’m grateful for the option try again with New Game+ after it’s all over. Like many great videogames, Lone Survivor is like a reoccurring lucid dream, one that you can eventually “get right” if you try. 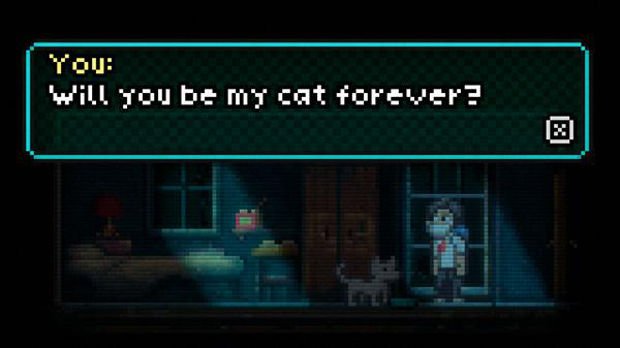 I’d love it if moving forward, we have less games that depict “the horror of mental illness” with nothing more than a muscular masked “maniac” wielding a sharp dangerous object, and more games about what psychosis is usually about in real life — struggling to take care of yourself due to sometimes terrifying, sometimes beautiful preoccupations. Not only would it be more accurate, but it would be a heck of a lot more interesting.