Whistlin’ past the cemetery

Walking down the street to check the mail at my hometown’s post office is an eerily different journey today than it was a year ago. I still pass the local pizza joint on the town square—a literal cornerstone of a small town community—but time has changed more than just ourselves. Despite the marks near the building’s roof acting as a reminder of its survival from the fire years before, the restaurant is still there, but not really. It’s hollowed out. Empty. It’s closed, for good, thrown to the void of to-be-forgotten establishments from before the pandemic.

As I walk by, memories of being a kid in that restaurant come flooding back: playing Dig Dug and Streets of Rage and some random bowling game with a physical ball to spin that controlled the virtual ball on-screen. Head down, wandering forward and lost in thought, I watched the sidewalk pass me by—square by square—and found myself thinking about Loop Hero.

On its face, Loop Hero is a curious amalgamation. Tower defense mechanics fuse naturally into a roguelite framework with a deck-building aspect, and if that sounds like a lot of bullshit, it’s because it is. At some point, diluting a game down to the cogs that construct it removes its identity as much as it informs it. Loop Hero is so much more than the sum of its parts, and its story ties together a patchwork only possible in the video game medium.

Plunging the depths of Loop Hero’s lore wasn’t only worth my time—it gave me my sense of time back. 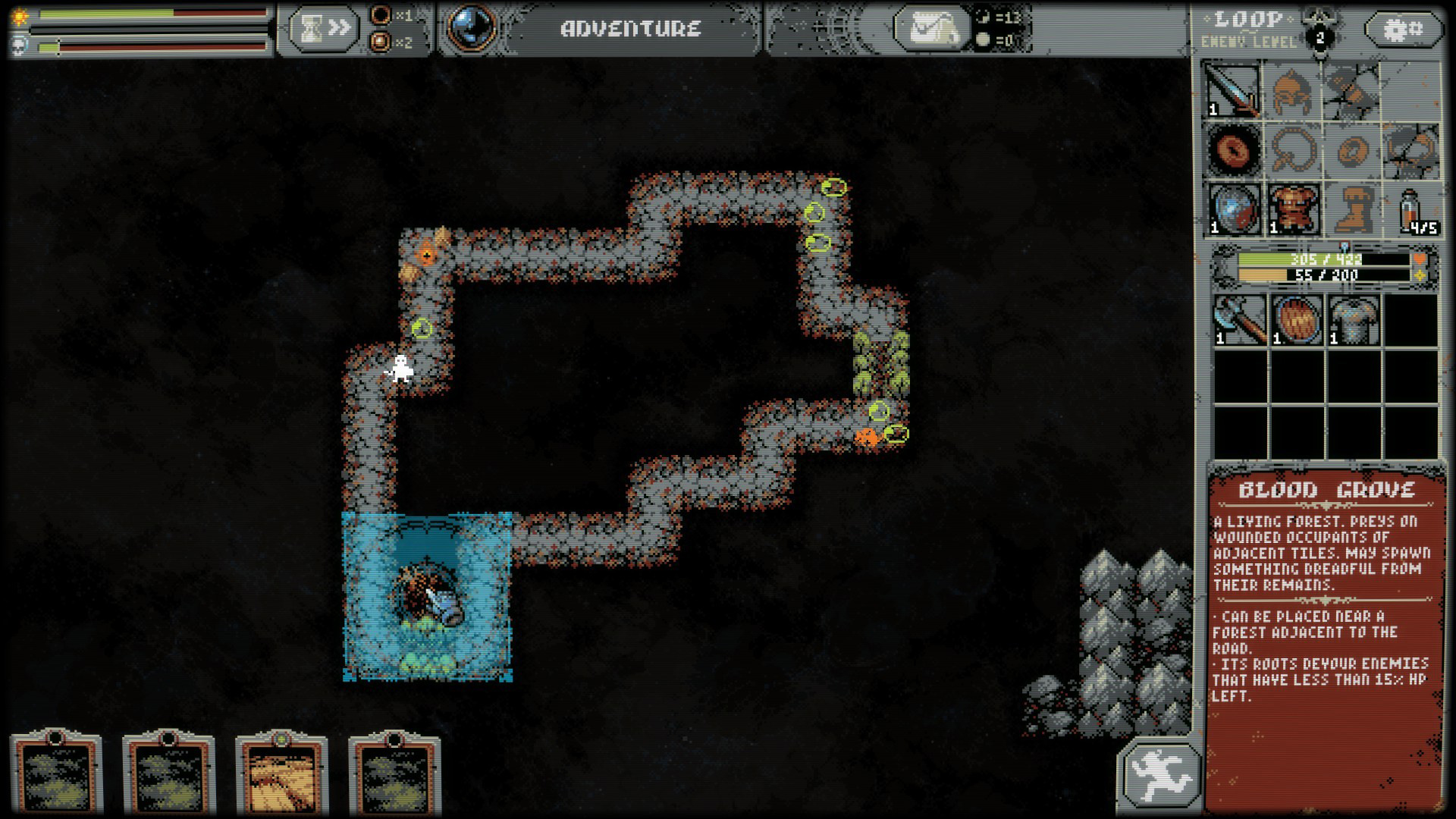 Loop Hero throws the titular Hero into the thick of the void with nothing but wasteland to wander. Each loop of road provides a new circular framework for him to travel as he recalls forgotten pieces of the world along the way. Enemies that spawn on the path provide The Hero opportunities to peer into the darkness to see what once was, and its depth goes deeper than a cursory glance implies. From the game’s environments to the very equipment taking up inventory space, every aspect of Loop Hero builds upon itself. Despite the encroaching heat death of the universe pulling all existence apart and some cosmic entities meddling with the process, turning off the game is the only way to truly prevent The Hero from rebuilding anything at all.

Along the road less traveled, whatever merges into memory grants The Hero resources to bring back to camp. Walking through a grove offers Stable Branches from its trees, Preserved Pebbles roll from the mountains—all the necessary goods to reconstruct buildings and the society that comes with them.

But the most coveted of all? Memory Fragments. When combined, these create a Book of Memories that unlock lore entries in the game’s encyclopedia. Out of all of Loop Hero’s resources, it’s these tomes I found to be most valuable. More than unlocking a new playable class or menu option, they helped me better understand what exactly it is I’m remembering. 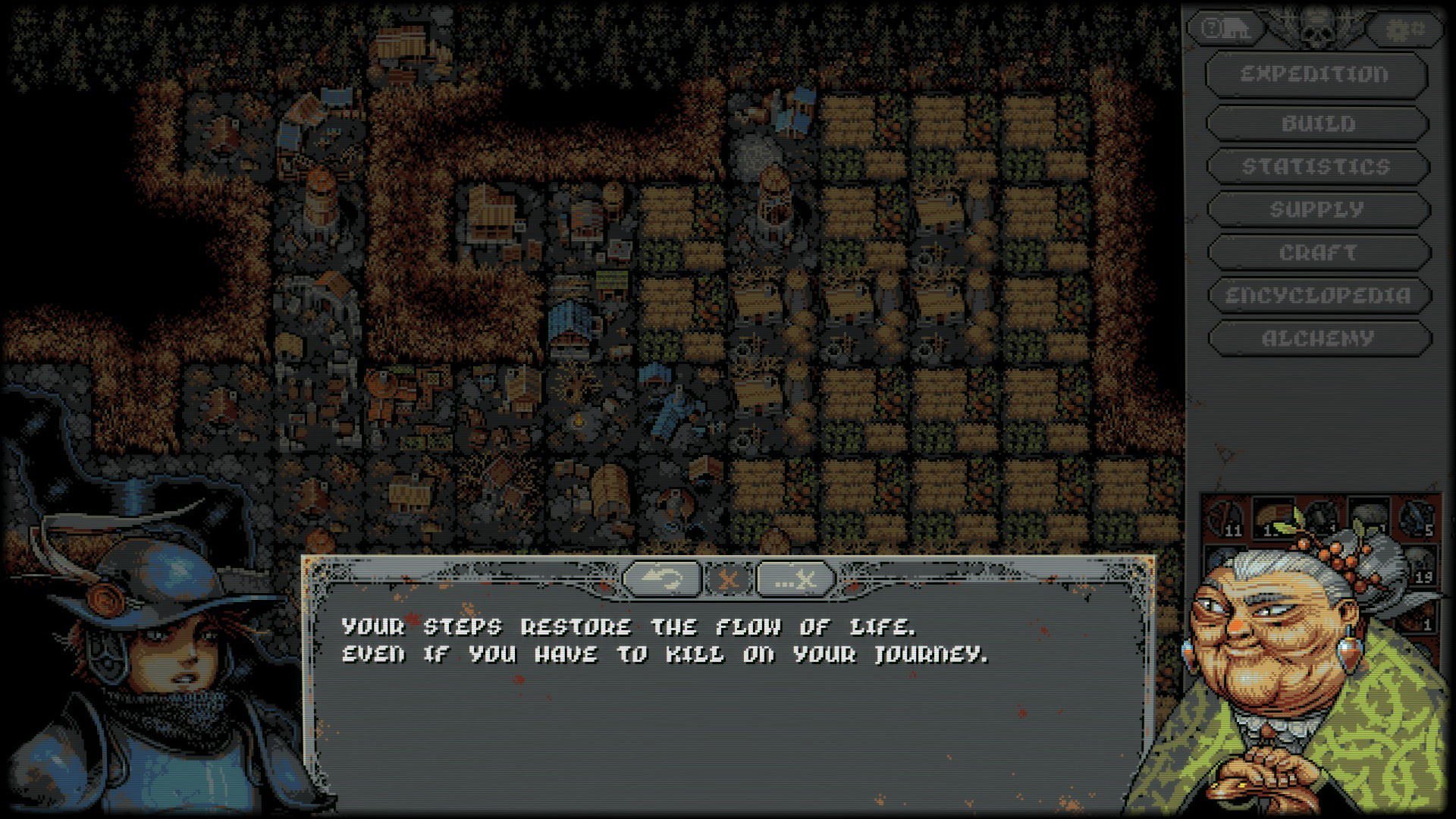 The encyclopedia is written as if it’s a compilation of recollections. Pieces of dreams; and, as such, completely random sources of information. A children’s rhyme. Sergeant Dobbie Jasper’s thoughts. A collection of stories by Gregor the Suspicious. Conversations with Madam Agatha, a flyer from the Guild of Enchanters, folk songs about Ivor the Fool, blips of overheard gossip, notes written on pieces of human skin, first-person journal entries written with the blood of a cosmic Leviathan as ink—as I unlocked each entry, my worldview continued to shapeshift.

Even the game’s inventory management establishes a void-like haze. Weapons and armor are discarded into scrap metal immediately after being replaced, preventing players the chance to organize their inventory while simultaneously gifting them a resource.

“After using a weapon or armor for some time, you start getting used to it. It becomes an ordinary part of the world around you,” reads Loop Hero’s encyclopedia. “And after replacing it with something new you often won’t be able to remember anything about your old gear. All that you remember is that it was something metal and useless.”

When you start playing Loop Hero, it’s impossible to know what you’re getting into. It’s not that trailers and screenshots don’t capture the weight of its gestalt narrative—they can’t. What starts as a simple objective to wander the road, avoid death, and return to camp safely becomes a grand, existential quest full of interlocking mechanics and lore. Tile by tile and loop by loop, every second spent in the game’s world compiles itself into a cohesive, ever-changing scenario. 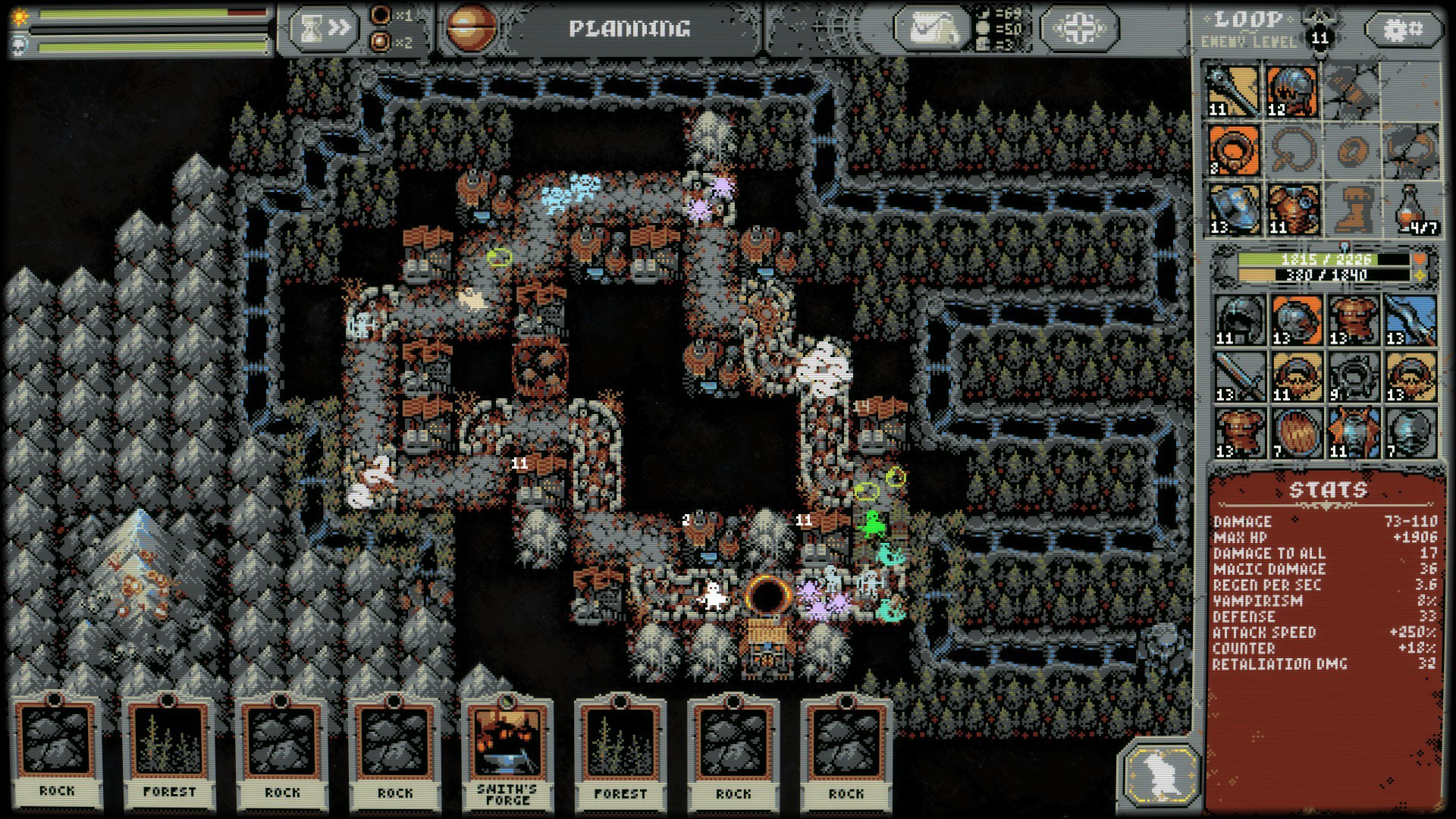 As accompaniment to Loop Hero‘s vivid ambiguity, the soundtrack and font both mimic the game’s distorted world. The text itself has texture to it. Too much, maybe, as it can be hard to read for prolonged periods, but developer Four Quarters recognizes this with accessible font options straight out of the main menu. Still, despite its legibility, it feels intentionally designed to be obscure.

Beyond the soundtrack’s fuzzy brass instruments backlit by crunchy kick drums and piercing, crackly snares, each camp building comes with unique sound effects whenever clicked. The forests and rivers vocalize themselves when observed, and the denizens they attract are stark reminders of humanity’s relentless will to survive.

People you encounter at camp are remembered alongside whatever you build with whatever resources you’ve found, as is the furniture they’re sitting on and the food they’re eating. It all already exists, somewhere, but it’s not until you uncover this world’s past that you see the reality of its present. Respites at camp are the only thing that separates each loop, but even then, they bleed together into one. Choosing to retreat from the void shows the camp in a new light. The game zooms in to a microscopic view, providing a glimpse into the density of a single tile and every subsequent tile before and after it.

The next loop The Hero ventures out into will not be the loop from which he retreated. The world’s seemingly the same as it’s always been, but what The Hero remembers about it on each journey will differ.

Every action in a loop feels like a fleeting moment of lucidity. It’s no different than watching glimpses of your dream flash you by as you re-enter consciousness every morning. What starts as mostly void ends in an overwhelming sense of scenery, but only sometimes. Other times, you may be back at the campfire before you’re able to recollect much of anything. 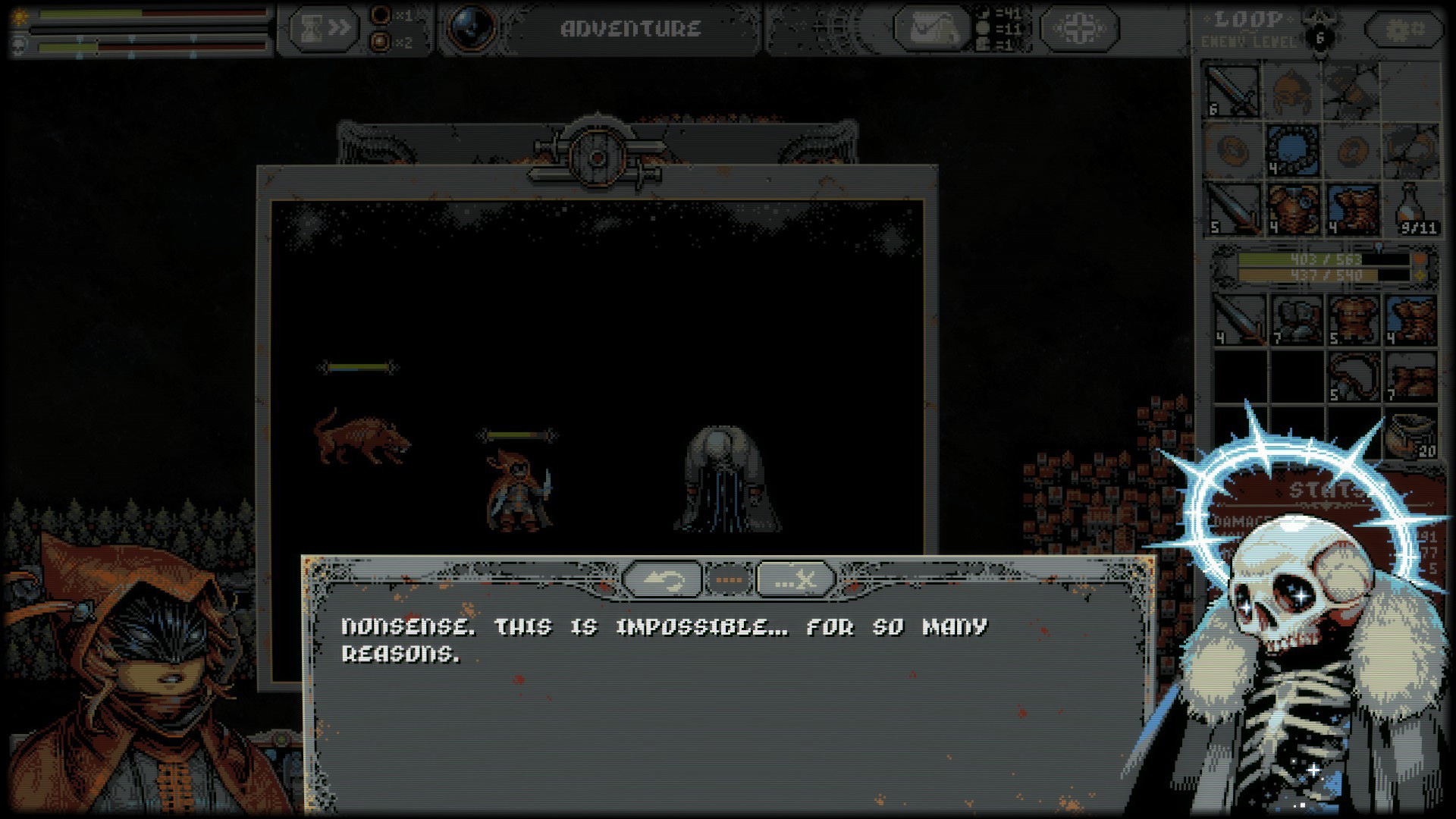 There’s an existential flavor that permeates the air in Loop Hero. You don’t choose what you remember from your dreams, nor do you control what memories sleep within you. Loop Hero rejects the void’s dominance, however, and affords players control over what they recall about the world around them.

Loop Hero resonates with something lying dormant in my subconscious. For every piece of the past I remember, I’m further awed by the depths of that well. And the older I get, the more that depot contains. Loop Hero’s obscurity helped me come to understand and accept my own. Well, at least a sliver of it, but that’s a sliver more than I had before.

Vaccine or not, these are heavy days. It’s not always easy to heave-ho my head, and when I do, I don’t see what I remember seeing. Not all the time. Time changes things. That pizza place ain’t coming back, but unforeseen memories can be mined from the veritable rubble—so long as you keep your head up to observe them.