There were some puzzles too

“It’s not a gravity gun; it’s a magnet.” Guru Games, developer ofMagnetic: Cage Closed,stressed this to me at PAX East. It works like a real magnet, with fields radiating out in all directions, rather than affecting only a forward-facing space.

In practice, it functions similarly in a lot of cases. Attract to pull objects closer, repel to push them further. It’s a bit of an oversimplification, but the magnet gun is central to solving the puzzles found in Cage Closed.However, puzzles aren’t all the title has going for it; Magnetic also features more action-oriented sections, branching pathways, and a focus on player choice. 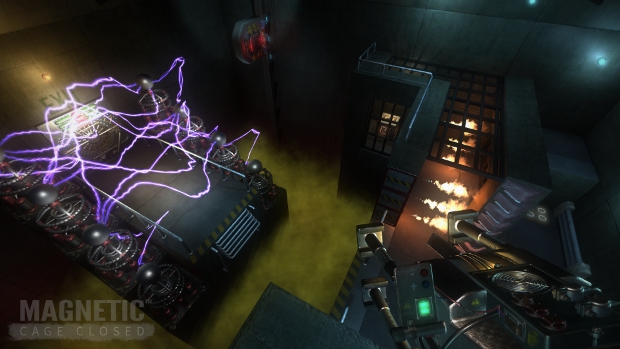 Like most modern first-person puzzle games, Magnetic is broken up into several discrete challenge rooms. Everything necessary to find a solution is contained within and nothing can be brought in or taken out of a room, aside from the magnet gun central to the mechanics.

One of the hooks that sets Magnetic apart is that each room is a cube, part of a large facility full of others like it. The cubes can move and rotate with respect to one another, but as a spectator on the inside, it isn’t obvious exactly how. So a particular exit may lead to different rooms on separate playthroughs (or even within a single playthrough in some cases), depending on choices made.

In the PAX demo, one introductory choice was shown. I was ushered into a room, stripped of my magnet gun, and placed in front of a big, red button. Will I press the button or not? (I pressed the button.) Guru Games said the later choices would hold more weight, dipping into morally ambiguous territory, but none were shown.

The meat of Cage Closed will feel familiar to most puzzle fans. There are pressure plates to activate, weighted boxes to manipulate, deadly traps to avoid, and exits to reach. The magnet gun does bring its own unique gameplay to the table, thanks to the realistic physics. Not only do the magnets behave like real (extremely powerful) magnets would, but the Newtonian principles are at work as well. If the player tries to attract (or repel) something with a large mass, it’s the magnet gun wielder who will move.

This sets up some extreme platforming, where pointing downward at a magnetic plate and repelling can set up for some huge jumps. Pointing toward a plate on the wall and hitting the attract button can keep the player suspended over a dangerous chasm. The rooms can be completed methodically, but Guru Games is also building Magnetic to encourage speed running and other high-level play.

The most difficult level in the PAX demo was one with an emphasis on speed rather than thought. It took a few tries, but I eventually was able to careen through the spike-ridden corridor and make it out the other side without being impaled. It took a bit of trial and error since it required rounding a corner and seeing what traps awaited in the middle of the jump, but it was manageable. 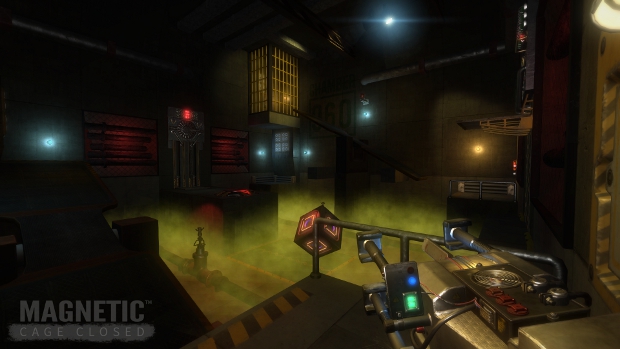 Breaking up puzzle gameplay with something more skill-based lets different parts of the brain rest, though I can imagine it being a little frustrating for players hoping for a more singular experience in either direction. Both styles of play were done adequately in the PAX demo, and I hope a good balance of the two is maintained in the final release.