As an institution within the videogame racing genre, Mario Kart has always been an example of what arcade style racing is all about. Focusing on simple, pick up and play gameplay, while still offering high level skill based action, the Mario Kart series has been going strong for over twenty years; and it doesn’t seem like it’ll stop any time soon.

Now, the series is finally taking its first steps onto an HD platform, and after spending about an hour of playtime with it, I just don’t see how they can go back after this. I’m just going to come right out and say it: Mario Kart 8 is one gorgeous game.

As the first full HD release of the series, the developers at Nintendo went the extra mile with creating a game that is visually spectacular, but also the most content rich game of the series.

Picking up where Mario Kart 7 left off, and pretty much where all the others did too, the various characters, creatures, and other residents of the Mushroom Kingdom once again compete in a series of races to decide who’s the best kart racer in all the land. Along with the returning roster, Bowser’s Koopalings (from Super Mario World ) are all fully playable and help to expand the large and diverse lineup. Moreover, characters missing from the last title (such as Baby Peach and Baby Daisy) are also reintroduced.

As the first Mario Kart title on the Wii U, and in HD, the developers were able to take advantage of the new technology to really flesh out and expand upon the classic Mario aesthetic. As with Super Mario 3D World, the HD visuals here really make the familiar Mario art style pop. 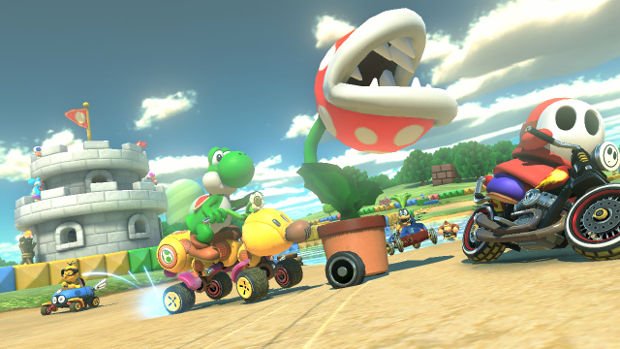 The graphics are crisp, detailed, and very dense in design, and not to mention this game runs at a rock solid 60FPS and at 720p — which not only benefits the gameplay, but also the visuals. While they are a wonder to look at, there were times the visuals felt a bit too busy and got distracting. Not too often, but there were moments where they might’ve went a bit overboard with the bloom and flashing lights. With that said, it still looks stunning in motion, and these screenshots don’t do this title justice.

As seen in the previous entry, verticality played a big impact on races with the hang-glider attachment and how you could clear gaps and soar over other racers. In MK8, they’ve expanded upon this in a big way by including actual vehicle transformation to take advantage of new terrain and pathways on the courses. Each track features multiple pathways and routes, and some of these will call for a change of vehicle. Some tracks feature underwater routes, gliding, and the brand new anti-gravity tracks — and there’s even a few that throw in every possible option. 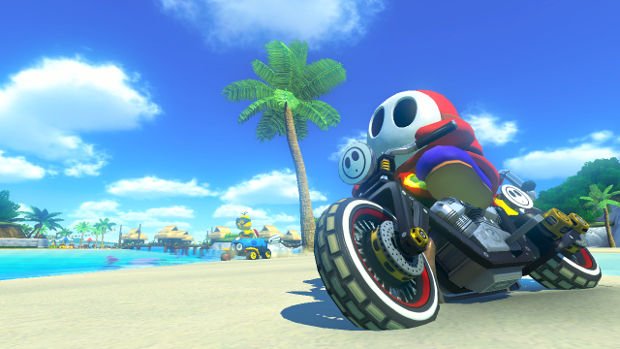 As you’ve likely seen from the various trailers and screenshots, anti-gravity is a big focus on the races, and many of the tracks will have racers swooping across the course sideways, upside down, and any other way you can think of. At first, it was a bit jarring transitioning to anti-grav mode, but I really got into it after a lap or so. Not only that, racing strategy changes up quite a bit.

During this phase you have to keep momentum, and knocking into racers is a great way to get a speed boost. Racers who aren’t usually aggressive will learn quickly that you’ll have to get mean to get ahead. As you can imagine, anti-grav tracks can get pretty hectic, as you’re going through loops, twists, and other turns, racers are going with the flow while beating into each other to eek out a speed boost. It was pretty crazy, and these moments offer the most intense moments Mario Kart racing has ever been. 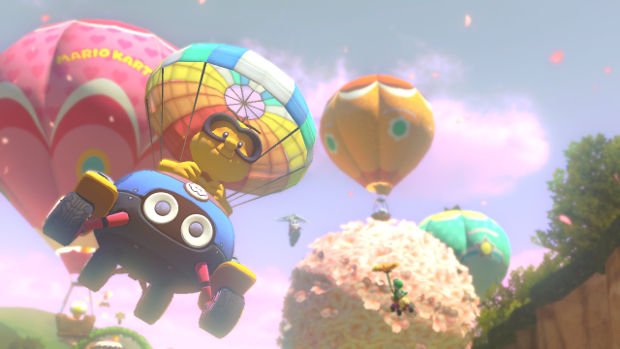 One of the most impressive features of Mario Kart 8 is the robust customization options. As in past games, you can deck out and customize each of the karts to fit your tastes and preferences. You can switch out to different karts and motorcycles that focus on speed, power, or handling, and can even swap out wheel types to fit whatever track you plan to race on. In MK8, they takes things a bit further by allowing players to mix and match different parts, chassis, wheels, and the like from different racers. Want to have Toad on a more level playing field with the other heavy hitters? Then deck out his vehicle with a heavy frame.

A staple of the Mario Kart series is having courses from previous titles return, and MK8 hasn’t held out on fans one bit. Tracks such as Moo Moo Meadows, Mario Circuit, Cheep Cheep Beach, Toad’s Turnpike, and Rainbow Road (N64 version) are playable in Mario Kart 8. To take advantage of the new visuals and gameplay, many of these courses have been altered — for the better. 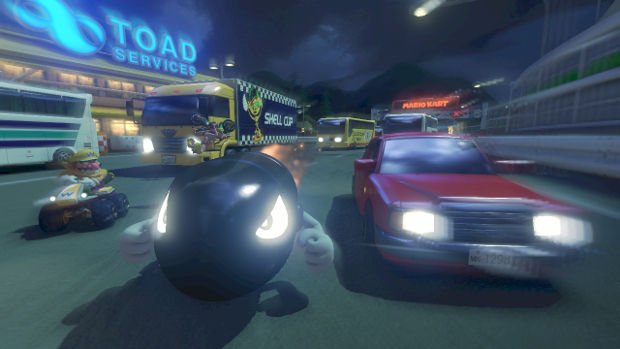 For instance, Toad’s Turnpike now has anti-grav tracks, which presents interesting opportunities for players. During my race, I used the anti-grav tracks to overtake my rivals, while avoiding heavy traffic and hopping across a series of trucks to gain the lead. Many of these tracks feel new, and the gameplay additions make me curious what else has changed for the other retro tracks.

In addition to the new racing gameplay, Nintendo has also expanded player profile options and online play. As you can expect, MK8 features online races, leaderboards, and many other features to give players access to constant competition. In addition to this is the new Mario Kart TV feature. After the end of each race, your best moments are saved and shown to you in a highlight reel. And these aren’t simple gameplay captures, your finest acts are shown in dramatic and epic fashion, with snazzy camera angles and fancy editing thanks to the Lakitu Bros., who man the cameras during every race. 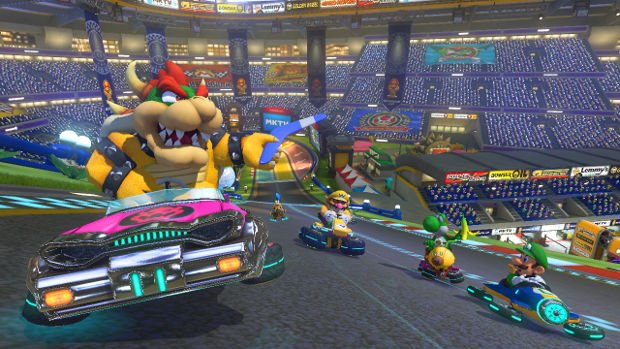 Many of these moments feature quick shots of players performing cool stunts, epic takedowns with powerups, and last minute victories. Of course, if players are particularly proud of a moment or the whole highlight reel, you can save and share them with friends. While Nintendo was a bit tight lipped about what else MKTV offers, what I’ve seen so far looks to be very interesting, and should make online and co-op play even more satisfying.

One thing that I really appreciate is the attention to detail. Throughout each race, there were callbacks and references to everything in Mario and Nintendo lore. It felt like a giant, and pardon the cliche, love letter to the whole series. I’ll be honest, I haven’t been this jazzed with a Mario Kart title in a long time, and playing this title made me really look forward to seeing more.

It sounds like I’m gushing, I know, but I was completely taken with it. I’m not much of a racing fan, so I was always appreciative of the Mario Kart series for giving me something accessible. As brief as it was, this hands-on time showed that the series hasn’t lost its touch one bit.