The sunk-cost fallacy in action

I guess I’ve only got myself to blame.

See, because I am an exceptionally cool and popular person (and also because I don’t have any TV that isn’t streaming), I didn’t catch the premiere ofMarvel’s The Inhumanson ABC Friday night. That said, I am a citizen of the Internet, so I’ve been privy to all of the prerelease coverage and saw a few of the hot takes flying around after the premiere over the weekend. So when I sat down in front of Hulu on Sunday afternoon and navigated my way toInhumans, I had a pretty good idea what I was in for. I should have known better, but see, pain and agony are the only things I can feel anymore in the little hellscape of a world we’re building, and damnit, I just needed to feelsomething.

But I’ve also been suffering over this since Sunday night and if I don’t get my thoughts out they’ll eat me from within so now you have to sit here and read some of my impressions of the thing (I mean, if you want).

We open in media res. A young woman is being chased through the jungle by some commandos. As she runs, we cut to severalslow-mo shots of, well, anything – rain falling, boots stomping through puddles, gun muzzles flashing as they fire, becausethis is very dramatic and we need to communicate this to you, viewer. As she flees, the woman is intercepted by Inhuman merman Triton, who steps out of the jungle and tells her he’s from the moon and he can save her with all the urgency of a dude ordering at Starbucks.

It only gets worse from there.

If you’ve somehow missed the boat, here’s the gist:Inhumansfollows the royal family of Attilan, which is a secret kingdom on “Earth’s moon” (as the show calls it constantly), made up of a race of super-powered beings called Inhumans. If you’ve seenAgents of S.H.I.E.L.D.odds are you know their deal – exposure to a substance called terrigenesis triggers a transformation in certain people, usually resulting in some sort of superpower. These people are decedentsof a bunch of people experimented on by aliens, and a few centuries ago some of them up and fled to the moon to create a secret monarchy (somehow, for some reason). The royal family is made up of Black Bolt, the king, whose power is his immensely destructive voice (which renders him effectively mute); his wife, Queen Medusa, whose hair can be used as prehensile tendrils; Gorgon, who has powerful hooves that can create localized earthquakes; Karnak, who can see and exploit the flaw in anything; Crystal, a princess with elemental powers; and Lockjaw, a giant dog who can teleport anywhere. There’s also Maximus, who doesn’t have inhuman powers but is a conniving schemer who wants the throne (and Medusa) for himself. The series follows Maximus’ coup of Attilan, and the royal family’s journey to reunite after being stranded on Earth and, presumably, take back power. 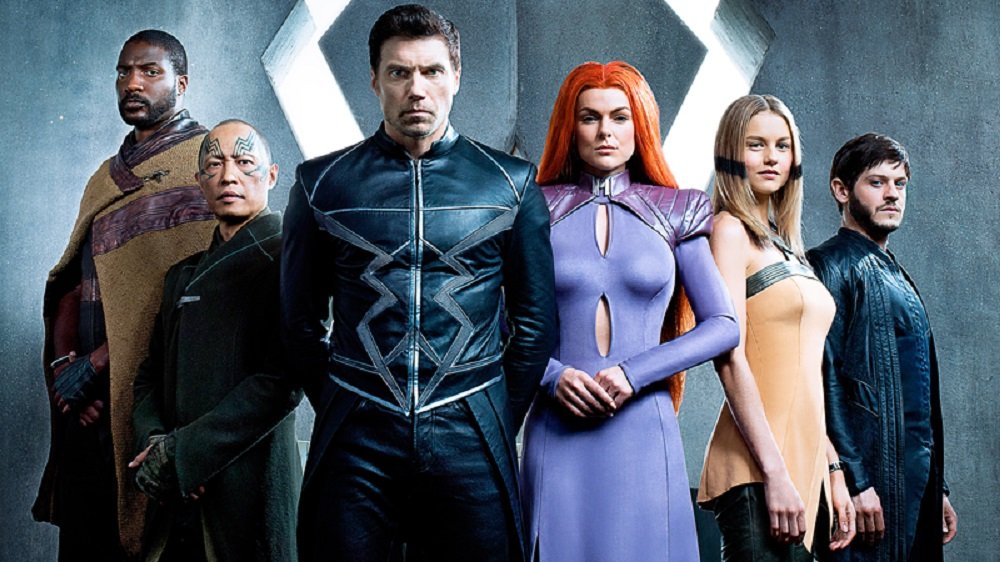 And it’sjust a mess. Almost nothing about this works. Each actor’s performance invokes all the emotion of a high school production ofRomeo & Juliet(a really,reallybad one, at that). The fight scenes are more bland and unfocused than they were inIron Fist, which I literally didn’t think was possible. Every character is a quippy asshole, except for Black Bolt, who exchanges quips for a stern silence. This shared personality trait seems meant to endear us to the royal family, but they mostly just come off as insufferable.

Things happen, apparently for no reason and without any consideration whatsoever. Gorgon meets up with some easy-going surfers after he’s stranded on Earth; these dudes convince him to goad Maximus’ army into a fight and then offer tofight an alien army by his sideafter talking to him for all of 20 minutes. The show completely fails to effectively communicate what Karnak’s whole deal is, presented first as a form of psuedo-telepathy and then as a kind of time travel, and nobody ever actually says “Hey, this is what Karnak does.” We spend about half an episode establishing the Inhumans, Attilan and everything that goes with that before punting most of them to Hawaii, mostly without their powers (“Hey, we don’t have the budget to depict literally the one thing Medusa does effectively. Let’s shave her head in the first episode!”). The entire thing is limp and lifeless; it feels like the worst product a corporately-controlled uber-frachise can produce. There’s nothing of value here – any given minute of screentime in theInhumanspremiere has something that’s boring, nonsensical or both.

Possibly the biggest problem area, though, lies in the plot. “Maximus schemes to take over the throne of Attilan” is the quintessential StockInhumansPlot, but it’s the details that make this variation completely distasteful. Attilan is expressly presented here as a society with a strict caste system, where people who don’t get cool enough superpowers from terrigenesis are forced into a lower class and are forced to work in mines. In the premiere, Maximus gains favor with people for speaking out against this system and advocates a move to Earth – and moves to institute a coup when the rest of the royal family dismiss his concerns. Sure, Maximus is willing to annihilate humanity when they get to Earth, and he commits more than a few murders to get on the throne; he’s not a good dude.But the stewards of a repressive and inherently unequal society have no desire to change anything, and they’re presented as thegood guys. IfInhumansis going for a morally-gray conflict where all of the characters are kind of shitty people, none of that is apparent in the premiere. There’s no nuance here –the Inhumans are the good guys, and Maximus is the bad guy,period. And in 2017, making your hero the king of an oppressive, bifurcated society is ahellof a thing to do with your superhero story.

The thing I kept coming back to for those excruciating 90 minutes or so (interrupted in the middle with some YouTube videos about cute animals because I am only human) was that the whole thing is an example of the sunk-cost fallacy unfolding in real time. Marvel and Disney dropped a bunch of money trying to get anInhumansmovie off the ground as part of “Phase Three” of the Marvel Cinematic Universe. But even with something like a five-year lead-time they couldn’t get it off the ground and it was ultimately scrapped.

This is speculation on my part, but it seems clear that they felt like they needed to producesomething, anything from that to justify the time and money already spent on the thing. So they punted it over to the oft-maligned TV side of the MCU, stripped it of any character and style it might have had. The result is…this, an adaptation of some of Jack Kirby’s weirdest and bonkers creations for Marvel, then strips away everything that might make it in any way interesting.

I knew what I was getting into when I turned onInhumans. It’s easily the worst thing the MCU has produced to date, by far – it’s a lifeless slog created by people who seem completely uninterested in not only any of the characters, but even the ramifications of the basic narrative. But if I’m being honest with myself, I’ll sit through the rest of the miniseries because I’m dead inside and they might reference it in passing onAgents of S.H.I.E.L.D.or something. But you…you have so much to live for.Stay away at all costs.