Sydney-based independent studio Flat Earth Games has released its top-down cyberpunk-noir contract killing simulator Metrocide via Steam Early Access at the reduced price of $6.99. The final version of the game, which should be available in around six weeks, will cost $12.99.

To coincide with the title’s Early Access launch, game creators Leigh and Rohan Harris have released a second developer walkthrough to demonstrate some of the more complicated hits you’ll be tasked with completing in the third zone of the game, Hilldale.

In this latest video, viewable below, anti-hero T.J. Trench is far better equipped than he was in the last. Sporting a high-powered silenced rifle and remotely detonated explosives, T.J. can now take down targets from a safe distance, but there’s a catch — depending on the contract’s criteria, visiting the crime scene may be necessary for cashing in on the reward. You may want to think twice before striking from a distance; it’s going to be difficult to pick up that briefcase with several heavily armed police drones hovering over the body.

This is just one of the many delightful nuances Flat Earth has built into the game. From the time I spent with it during the last week or so, I found that aspects of Metrocide‘s difficulty seem to align well with my experiences playing the pen-and-paper role-playing game Shadowrun.

For every advantage you gain, there’s a tradeoff. Some items may seem to give you the upper hand, but the game’s rules still manage to balance things out, tasking you, the player, to be ever more thoughtful if you want to successfully leverage your new hardware. 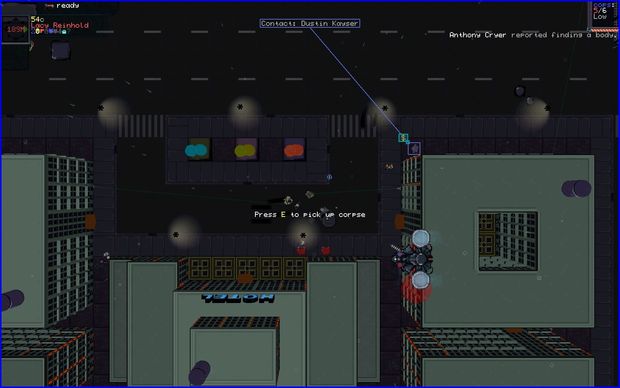 One of the biggest surprises I experienced while playing Metrocide was witnessing the emergent AI behavior — the world reacts to itself depending on the current conditions in the game.

I pulled my gun on a target and realized too late that he was also armed (and much faster on the draw than I was), when seemingly out of nowhere, he drops to the sidewalk in front of me in a pool of blood — shot dead from behind by an armed vigilante when he drew his weapon. Mission complete. I’d managed to fire off no rounds during the hit, still collected my reward, and now the vigilante is the suspect of the crime rather than me. Brilliant. 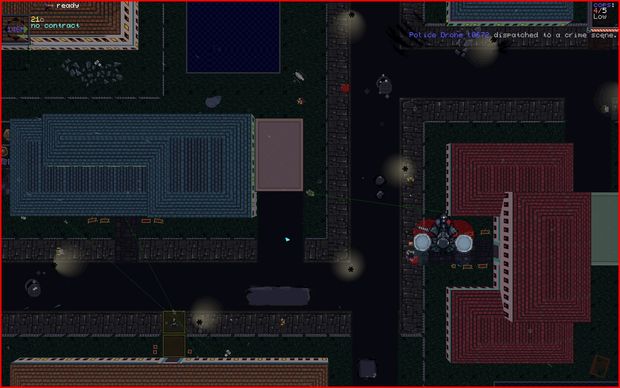 Metrocide is a thinking person’s Hotline Miami. Yes, the game will still allow you to run in guns blazing, but you’re going to need a hell of a lot of luck to pull off your hits. Not only do you stand a good chance of being shot dead in the streets by vigilantes if you’re seen brandishing a gun, you’ll also draw the unwanted attention of the police drones. Once they’re investigating an area of the map, you’re better off avoiding it completely. If you catch their attention, they shoot on sight and there’s no way to outrun them.

Patience and creativity are rewarded in this bleak dystopian cityscape, not recklessness. Taking your time and thinking about what you’re doing allows this title to shine. Unlike other stealth-based games that I’ve played, I was never bored while preparing to make my move. The city is far too reactive to let that happen. The AI surrounding you makes every hit different in one way or another. You never know how things are going to play out, so you have to always be flexible in your tactics, which I’m sure will add tremendously to the game’s replay value. 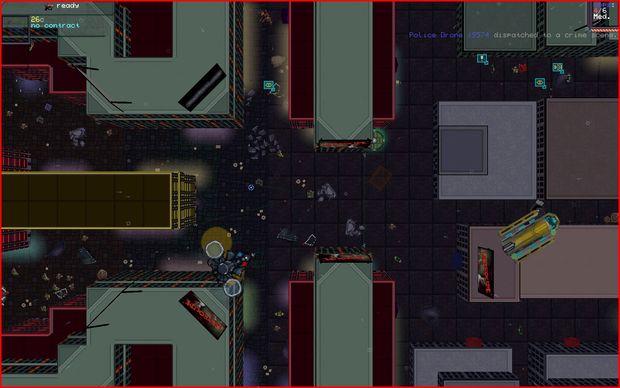 Metrocide is not a perfect fit for everyone. It’s a challenging little game that features the the love-it or hate-it permadeath gameplay mechanic. It also doesn’t rely on realistic graphics or an interactive open world to be engaging; but, if you’re willing to look past these aspects of the project, I think you’ll find an intriguing game that rewards persistence, restraint, and creativity.

If you’re interested in trying it out for yourself or would just like to learn a bit more about it, you can do so by visiting the title’s Steam Early Access page for more details.