I’ve played 250+ hours of the original

When Mirror’s Edge came out in 2008, nobody really knew what to make of it. The game was a valiant effort at doing first-person parkour well, but a lot of people were put off by some awkward controls, bad combat, and perceived linear level design. After that, it more or less faded away from the gaming consciousness, being one of those games that tried something new and for most people just didn’t quite hit the mark.

For me though, Mirror’s Edge quickly became one of my all-time favourite games. Between Xbox 360 and PC, I’ve clocked somewhere between 250 and 300 hours of it. I’ve speedrun the game for years, and it’s one of the few games I know like the back of my hand. Going in to Mirror’sEdge: Catalyst at EGX 2015, I had a definitive goal — I wanted to see how the game really compares to the original I know so well.

The demo forMirror’s Edge: Catalyststarted off with an exposition cutscene. I play as Faith (same protagonist as the first game), and am being released from a prison in the city of Glass (not the same city). If I don’t find employment within two weeks, I will be re-arrested and taken straight back to the slammer.

The setup felt a lot more in-your-face than the subtlety the original game’s backstory had; gone is the covert government surveillance and governmental corruption, and in are the contact lenses which project advertising into your eye. 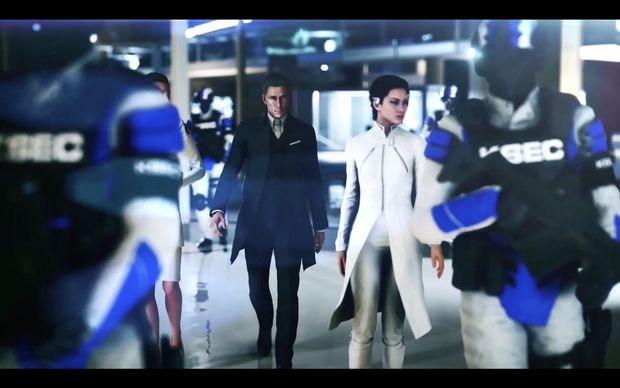 But whatever, I had running to do and only 13 minutes of demo to do it in. After a short tutorial, I was let loose on a small area of the map. The area itself wasn’t too big, with the rest of the city available and open in the full release of the game, but it was still an order of magnitude bigger than any space I’d seen I the first game. It was almost daunting, being presented with such a big space when I was used to the linearity of the first game.

I was given the choice of three different missions: I could hack a billboard to put my own pro-Runner propaganda up, I could deliver a memory stick for the criminal underworld (and fight a load of guards at the same time), or I could just race Icarus, my new runner buddy.

The map system is nicely done, and it gives the game’s iconic runner vision a whole new lease of life. Faith’s ability to see where she needed to go in the world has always been designated by objects tinted red.Catalysttakes that originally fairly useless but still pretty effect from the linear first game and puts it to great use in this open world successor.

A lot of previews ofCatalysthave said the game feels more or less exactly like the first game. The controls have been retweaked slightly, but other than that I’ve been led to believeCatalystjust expands what the first game did. While that may be true for those who only playedMirror’s Edgea few times, I did notice some very big differences in how it felt to play.

The biggest one is the entire thing felt kind of floaty. Jumps lasted longer, climbing over fences took longer, and a lot of your movements are based around getting higher in the space. For example, in the original game if you hit an object like a fence or a vent at the right height, you would quickly vault over it to maintain your momentum.

InCatalyst, the vault is still there, but holding down the jump button (like I was used to in the original game) made me climb up onto the object and jump off of it to get a bit of extra height. It was a change that took a lot of getting used to, but once I had it opened up plenty of new routes for me.

The cost of this new maneuverability isCatalystdoesn’t feel as grounded asMirror’s Edgedid. There was originally a lot of weight to Faith’s movements, and you couldn’t build up that much height without using bars or ledge, but inCatalystit sometimes felt like gravity didn’t really matter to Faith, and that she’d float off away from Glass at the first chance she was given. 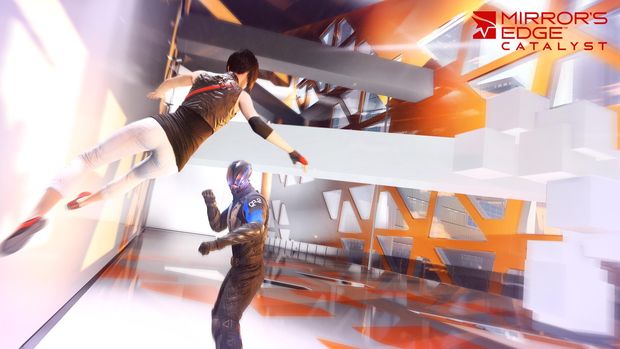 Another major difference toCatalystis the massive changes to combat. The new combat is built around maintaining flow and momentum, rather than having to stop and do a lot of punching like it was in the first game. It all seems to be context-sensitive as well; when I was nowhere near any guards, pressing the attack buttons would do absolutely nothing.

So does this new system actually let you incorporate combat into your flow? Not really. It feels so much better than the first game, for sure. I wasn’t pissed off when I had to fight, and it was incredibly cool pulling off the cinematic takedowns. It’sfun, but it still has the problem of stopping you dead in your tracks.

One positive thing is triggering attack animations extended my jumps too, and even saved me from one point where I was certainly about to die. Picture it as a less extravagant version of the homing attack in modernSonic the Hedgehoggames, and it’s easy to imagine where the uses for combat would come in.

It’s worth keeping in mind the original game is absolutely ingrained into my muscle memory at this point. On the whole, it plays just like the first game: once you’ve got flow built up, traversing this open world feels fantastic, and the new skills Faith has really add to the experience. Swinging around vertical pipes, leaping off of chain-link fences, and incorporating some combat into my run were a lot of fun.

Catalystmore than feels like a decent successor toMirror’s Edge. The plot elements from the first game are taken and expanded to make Glass an interesting world to explore, and the most obvious parts of the movement in the first game are still there and have been refined. The combat is better (though not as improved as I was hoping), and the controls definitely feel less awkward. I genuinely did enjoy my time withCatalysta lot more than I was expecting to.

There’s just a few changes to it that makeCatalystfeel like a simplification of the original game’s systems. People who have played the original once or twice will certainly appreciate those simplifications, but for me it felt like the potential skill ceiling was a fair bit lower than the original game. I can’t see myself pulling off the same sort of stuff I can in the original, because of the very small ways freedom is taken away from you.

We will see whether I’m right whenMirror’s Edge: Catalystreleases on February 23, 2016. It’s still definitely one of my most anticipated games, that’s for sure.