Are you into elbows?

I was mostly satisfied with MLB 14 The Show‘s initial PS3 and Vita release. Hitting ahead of the PS4 version led to some (perhaps overdue) improvements, from the UI overhaul to PS3/PS4/Vita cross saves to a universal The Show profile to franchise carry over into the next years’ installments.

Coupled with little touches like a new dynamic camera angle, the addictive weekly challenge, and even more gameplay options (Quick Count and Player Lock), it felt like a worthy send off for the best baseball series of the last generation.

The problem, of course, is when the PS4 version hits (now), none of this is new. It just looks better. And somehow loads slower. 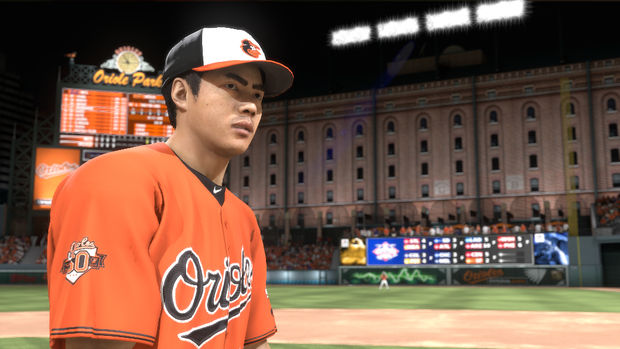 How into elbows are you? If elbows are your thing, wow, you’re going to be happier than an old guard sportswriter getting asked for their stance on PEDs. MLB 14 The Show has some of the finest detailed, unique elbows I’ve seen. And you stare at them a lot, especially hitting with the catcher cam. Every corrugated joint seems to hide a story.

Though it’s easy to fall into, “I am playing The Show” mode — because the gameplay is exactly the same — and not notice all these additions during regular play, which is why the camera seems anxious to pan over the crowd or show off a new, true to life pre-batting animation. And those in attendance no longer look like broke-limbed chimera praying for death, so it’s sort of nice when the camera pans over them between innings, dancing like perfectly happy idiots drunk off $11 beer.

With these updated visuals comes a trek into the uncanny valley, but you can’t fault some misses when you are trying to faithfully model hundreds of real people. And why spend days modelling George Kontos when he’ll get optioned back down to the minors anyway? I wonder if there’s some sort of priority list the team goes through and then hopes someone at the bottom doesn’t explode onto the scene. What’s the return on investment for nailing Giancarlo Stanton’s chin stubble? I guess when the base game is good, you run out of things to change year over year, barring Blernsball additions (multiball, multiball!). 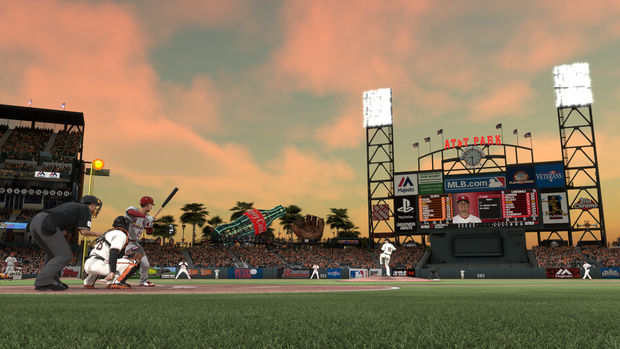 Why do certain Giants relievers look more faithful than Hunter Pence? Do we need a PS5 to capture Pence’s piercing intensity? A lot of it comes from the eyes, which is not where these new character models excel. There are a lot of thousand yard stares going on that amused me infinitely. And while individual beard strands was a selling point early on, hair on the whole lacks physics or flow, so all those long manes that are back in style look like erect steel wool poking out of caps. Andrew McCutchen’s dreads look like bundled boughs.

But they also added Pence’s schizophrenic batting stance and, on the whole, the recreation — parks, players, animations — is sort of remarkable, even if that makes any seams more noticeable.

And of course MLB 14 still delivers on being good, system be damned. My first game on PS4, I took a perfect game into the 6th inning and every at bat that went to three balls was fraught. A seeing-eye single squelched my delusions of grandeur and a rare opposite field home run into McCovey Cove turned 2-0 coasting into a 2-1 nail biter. I went from perfect game to complete game shut out to complete game and an almost to a blown save and loss when I loaded the bases in the 9th inning before inducing a double play to preserve that precious 2-1 win.

That’s baseball and The Show has always been able to replicate those cardiac ups and downs even with lower, fictional stakes. MLB 14 on the PS4 does it with gussied up visuals and seemingly longer load times (and a lengthy initial install). But baseball is still well loved despite taking several hours to get on with itself and I doubt fans are going to be too tore up about having to check Twitter while waiting a good minute to get into a game. Sometimes I tweet while at bat, too, when I force myself to take pitches instead of swinging at every damn thing.