I was late to the party with the newDoom. Ipicked only picked up the game a few weeks ago. And by now, all the reviews have been written, everyone knows its great. There are already tons of articles, opinion pieces, and editorials out there gushing about it, talking about how successfully it captures the spirit of the original Doom.

I suppose this is going to be another one. But, in the spirit of the over-the-top escalation that defines the Doom series (why use a shotgun when you can use a super shotgun? Why cut down demons with a chaingun when you could mulch them with a triple-chaingun?) I’m gonna take it a step further. I think Doom (2016) is flat out a better game than Doom (1993).

I don’t say this because of the fancy 3D graphics, or the pure murder-fuel soundtrack, or even the fact that you can look up (though those are all pretty great in their own right). No, I think Doom (2016) is a better game than Doom (1993) because it solved a simple problem of the original.

I actually use all the guns. 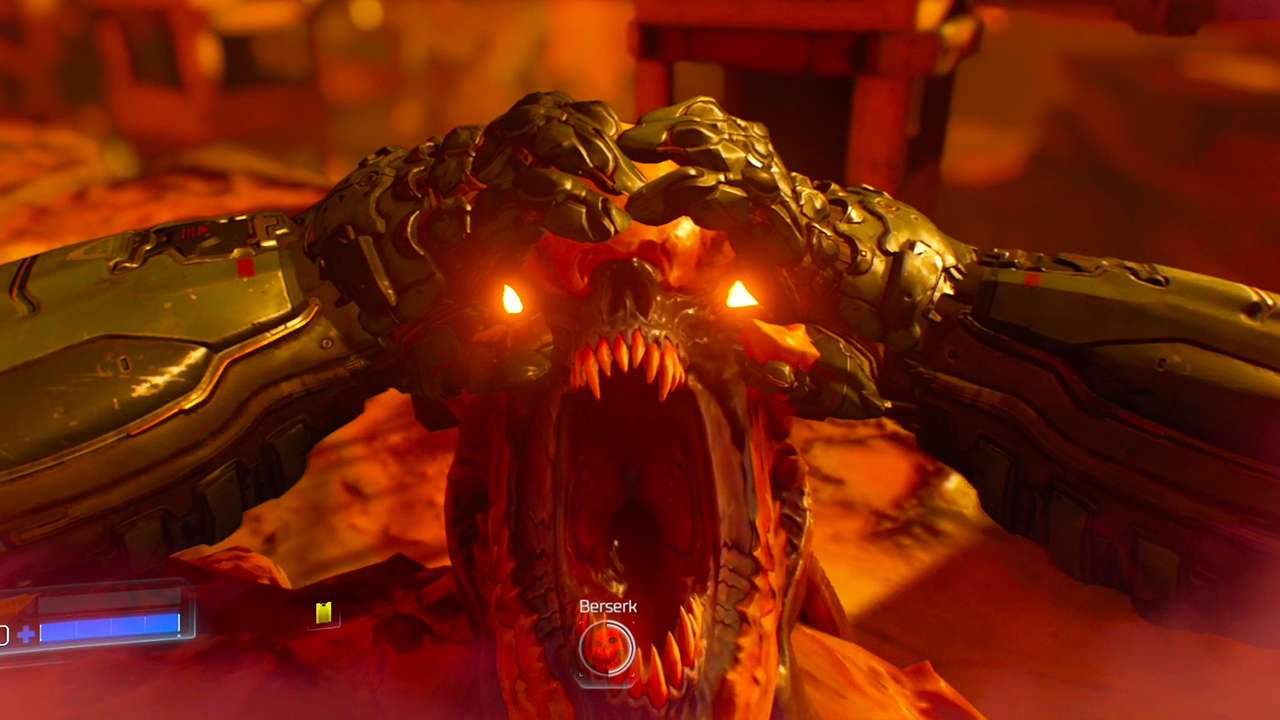 I’ve played through the latest Doom with one singular goal – maximum aggression at all times. I cranked the difficulty up to Ultra Violence right from the start on the recommendation of trusted individuals who promised the added difficulty would bring out something sharp and nasty in the game. I always use the most powerful weapon at my disposal for the present situation with total abandon.

Sometimes this means rushing headlong into a Hell Knight and unloading double-barrel blast after double-barrel blast of buckshot straight into its guts. Sometimes this means mowing down a pack of Imps with an irresponsible amount of hot-lead delivered from three red-hot chainguns firing simultaneously. It often means plunging streams of miniature rockets directly into the eye socket of a cycloptic Cacodemon. I hate those guys.

It’s been a glorious celebration of violence. The kind of murder-zeal that provides a sliver of truth to the moral guardians and their hand-wringing over the implications of video game violence. It was also something I would never, ever do in the original Doom. 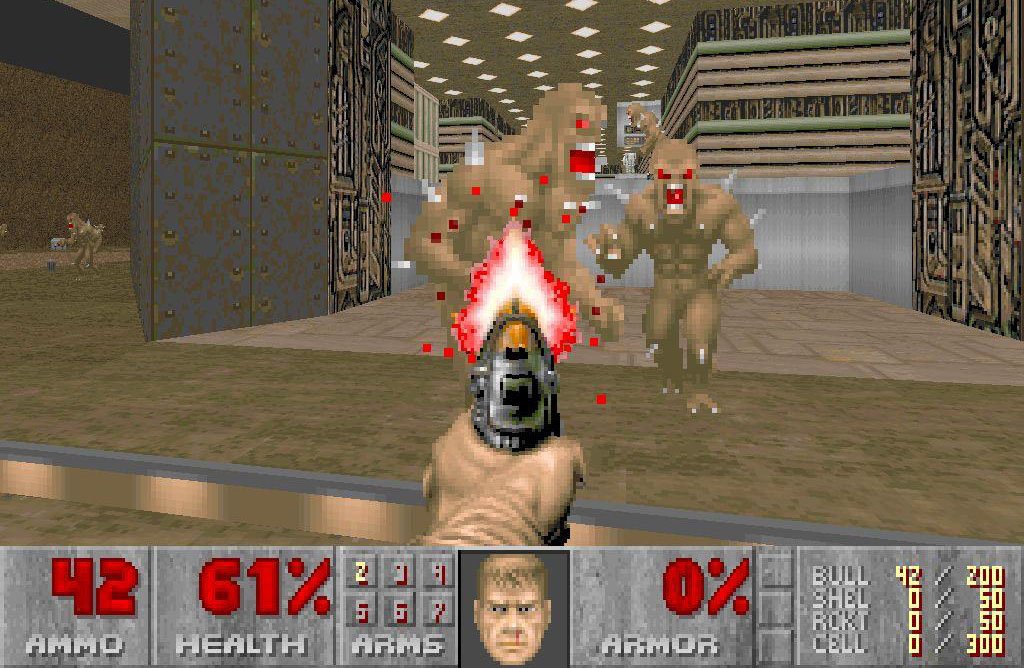 I loved Doom. Growing up without a PC, I didn’t have the luxury of playing it at home. Instead, I sniffed it out like water in the desert and I coveted my play sessions with it like a man half-mad with dehydration. I played it at my uncle’s house, disappearing into the family den for what were frankly impolite periods of time (they’d half-joke that I was there to visit the PC instead of them. I’d laugh uncomfortably, wait a few minutes and slink away for one more quick session before leaving).

Because of the limited time I had with the game I was very focused on progress, on seeing more of it than I had before. There wasn’t time to be faffing about, dying, and restarting areas so I’d focus on optimal play. Every bullet and point of armor was precious. If I could clear a room using the standard shotgun instead of the minigun, so much the better. The pulse rifle was fine china, only taken out when in the presence of the most esteemed demonic company.

To be honest, blaming my hesitant play on the limited time I had with the game is just an excuse. Even when the console versions came out – the decent SNES translation of the original PC title and the bizarre (but underrated) Doom 64 – I still played the same way. Ducking in and out of corridors, popping off one or two shots and diving back into cover. I played like a coward (it’s totally possible I was a coward).

At best you could say my time with the PC version trained me to play like a wimp. But, the game’s very mechanics rewarded that style of play. 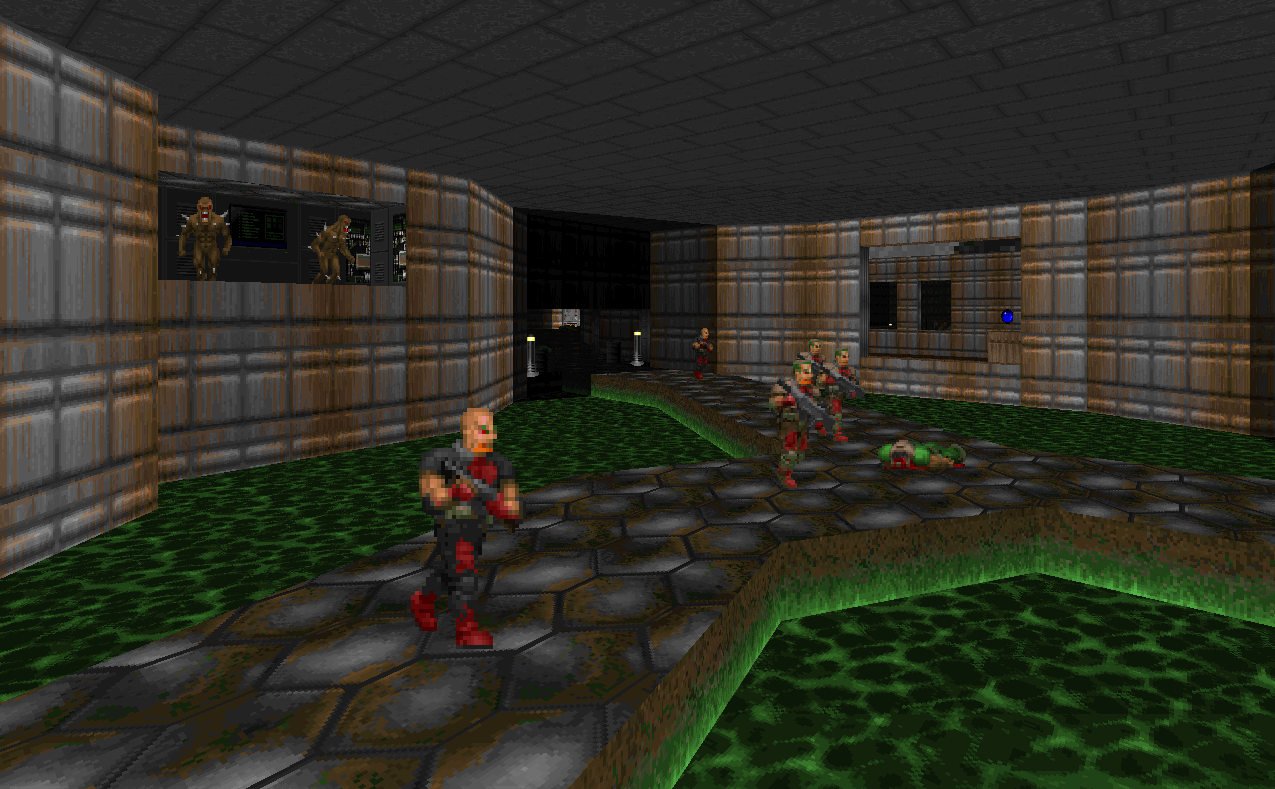 Doom is very good at scaring the player. When you look at it from the outside, with the benefit of hindsight, there are plenty of resources to keep the player going. Health-kits, ammo drops, hidden secret areas. But, in the moment, when first exploring those corridors and acid pools, it feels very different. It always feels like you’re on the verge of death, that you’re taking too much damage, using too much ammo. There is the constant worry that if you use too much of the “good ammo” now you’d find yourself screwed two rooms over. The fear of a bigger, scarier group of demons just around the corner, encouraging you to play it safe and save the big guns.

I’ve written about this phenomenon before and I know I’m not the only one to experience it. A combination of uncertainty and “too good to use” syndrome conspires to make many of us play through games using only the barest of necessities. Make us scurry for every cheap nook to hide in, pinch every bullet. Plenty of games are guilty of inspiring the behavior. But, the poster child for it, at least in my mind, will always be all the unspent rounds of BFG ammo I never fired in Doom, destined to remain tragically harmless in my inventory when they could have been melting hellspawn.

Doom (2016) solves that. It solves it in the most metal, most Doom-like way possible. Instead of punishing high-aggression violence, it rewards it. Instead of rewarding cowardice, it starves you for it. I don’t think game mechanics have ever brought a tear to my eye before, but here we are. 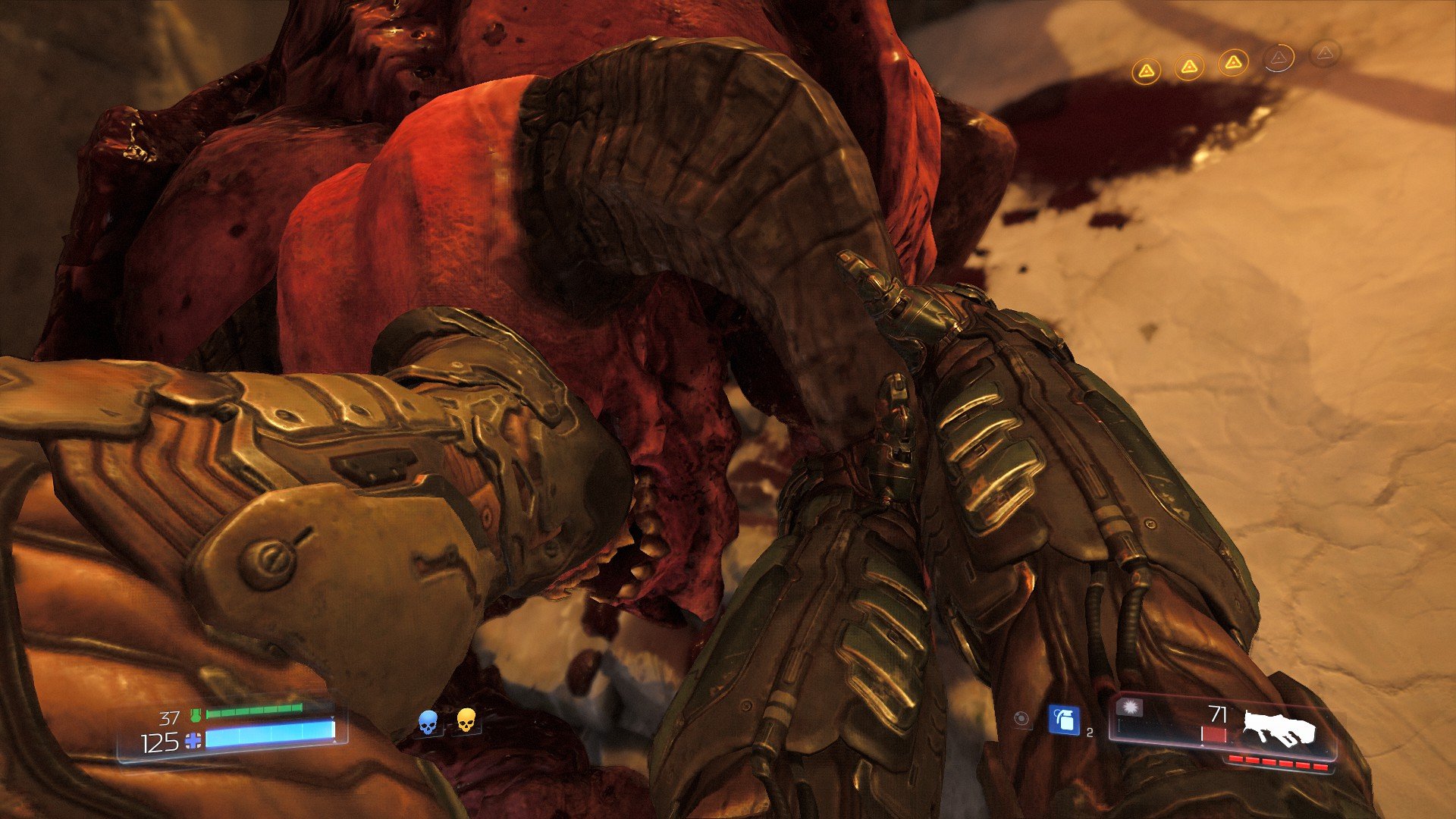 For those not familiar, the latest Doom introduces a concept known as “glory kills.” Damaging a demon to the point of death will put it into a stun state and during that state you can run up to it for a close-in melee kill (always involving a sickeningly painful-looking act of malice) that rewards you with a shower of health. This flips the dynamic of battle on its head. The safest place to be isn’t down some corridor, pecking away at the enemy with potshots, it’s to be right in the middle of the fray, pressing up against the fleshy, walking health-kits as they writhe and scream.

But because Doom is great, it doesn’t rest there. It also introduces the chainsaw mechanic.

Is there any other weapon that has such an ethos surrounding it as Doom‘s chainsaw? Maybe Gordon Freeman’s crowbar comes close, maybe (and only among the baristas and ironic facial hair set that worship him as a patron saint). The chainsaw is Doom, the bleeding ragged edge of hyper-violence that voices the game’s entire aesthetic and mission statement. Christ, the first stage you can acquire it on in the original Doom has it siting atop a literal pedestal that you have to watch descend (presumably designed to give you enough time to achieve full mast) before picking it up.

And if you’re like me, you probably barely used it because who wants to get close and take damage (even when it looks so rad)? 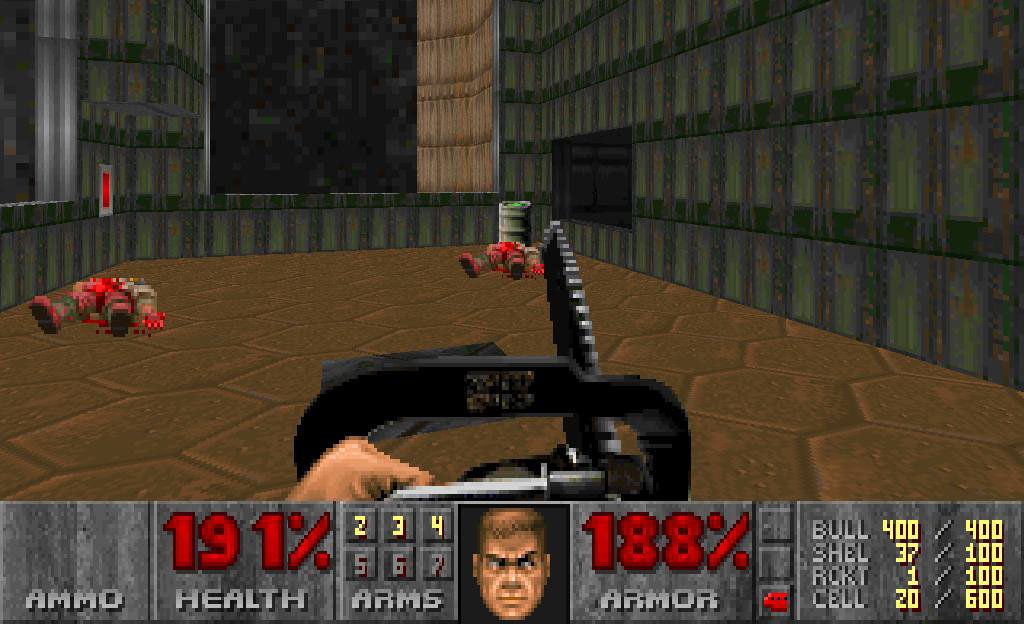 The latest Doom solves that problem. The chainsaw is treated with exactly as much reverence – hell an entire button is dedicated to its use (particularly noticeable when playing on console with a control pad). But, instead of just being a triumph of aggressive teenage posturing, it serves an incredibly important function in the game’s ecology. It’s a dual-function panic button and resupply closet.

When you tear an enemy to pieces with the chainsaw, the corpse will (through the miracle of video game logic) spew out a pile of ammo that would make an Arkansas gun show blush. The amount of ammo you receive is supposedly related to how big and scary the demon you kill is, but in practice that matters very little. Even bisecting a lowly Imp, the runtiest, saddest demon out there, will result in a bounty of ammo that will comfortably get you back in the fight. The chainsaw is limited by fuel (bigger monsters take more fuel to shred), but it is in such abundance that your buzzing buddy is always available when you need it. 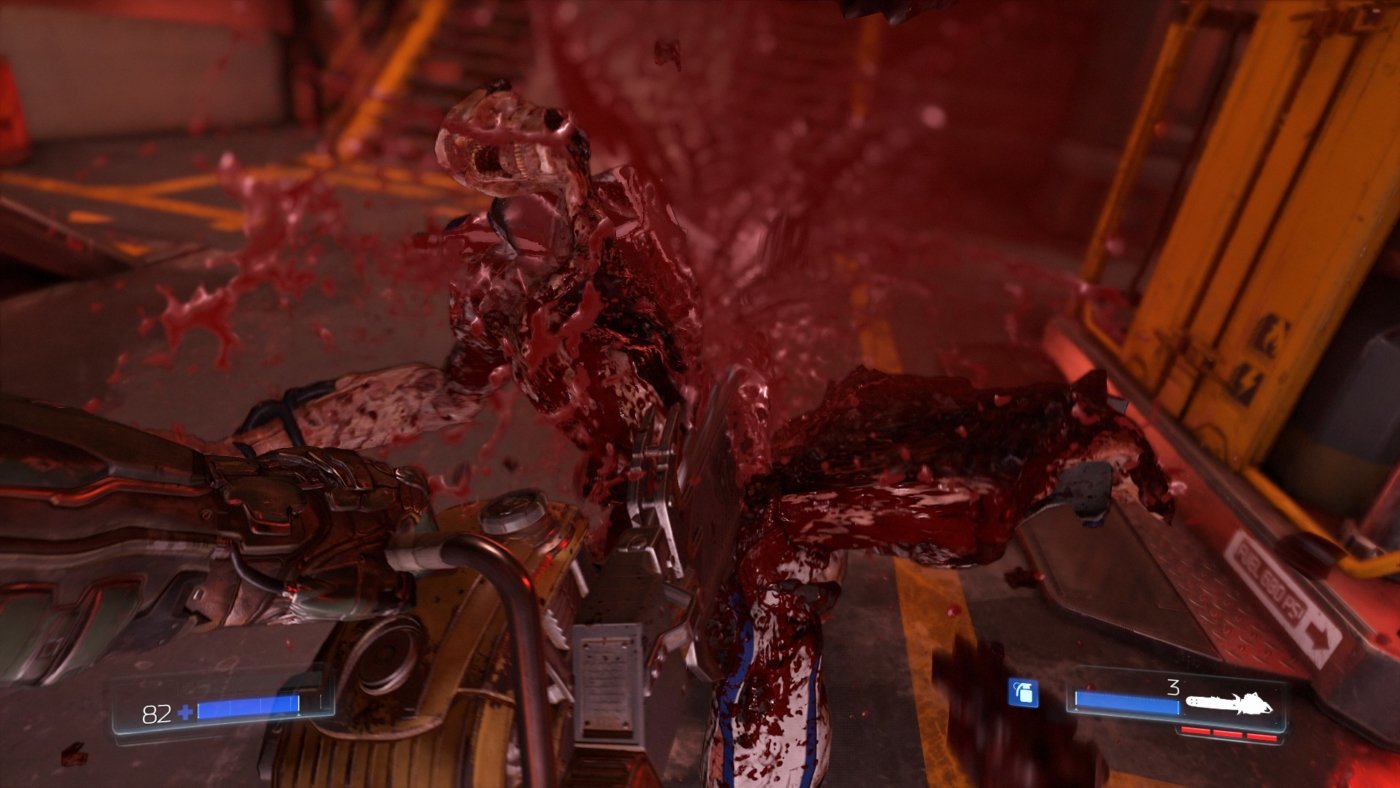 But, the chainsaw is also a guaranteed one-hit kill on any enemy in the game (well, except for bosses). This makes it important, an escape hatch you can always look to when the chips are down. Even against the hardest foes, in the most ridiculous never-ending hordes of demons, the best place to be is always within spitting distance of the bastards – cracking open their spines to drink their health, tearing through their guts to reload your guns. A big nasty demon sauntering up while your out of ammo and on your last legs isn’t the end – it’s a great chance to rearm and keep fighting. 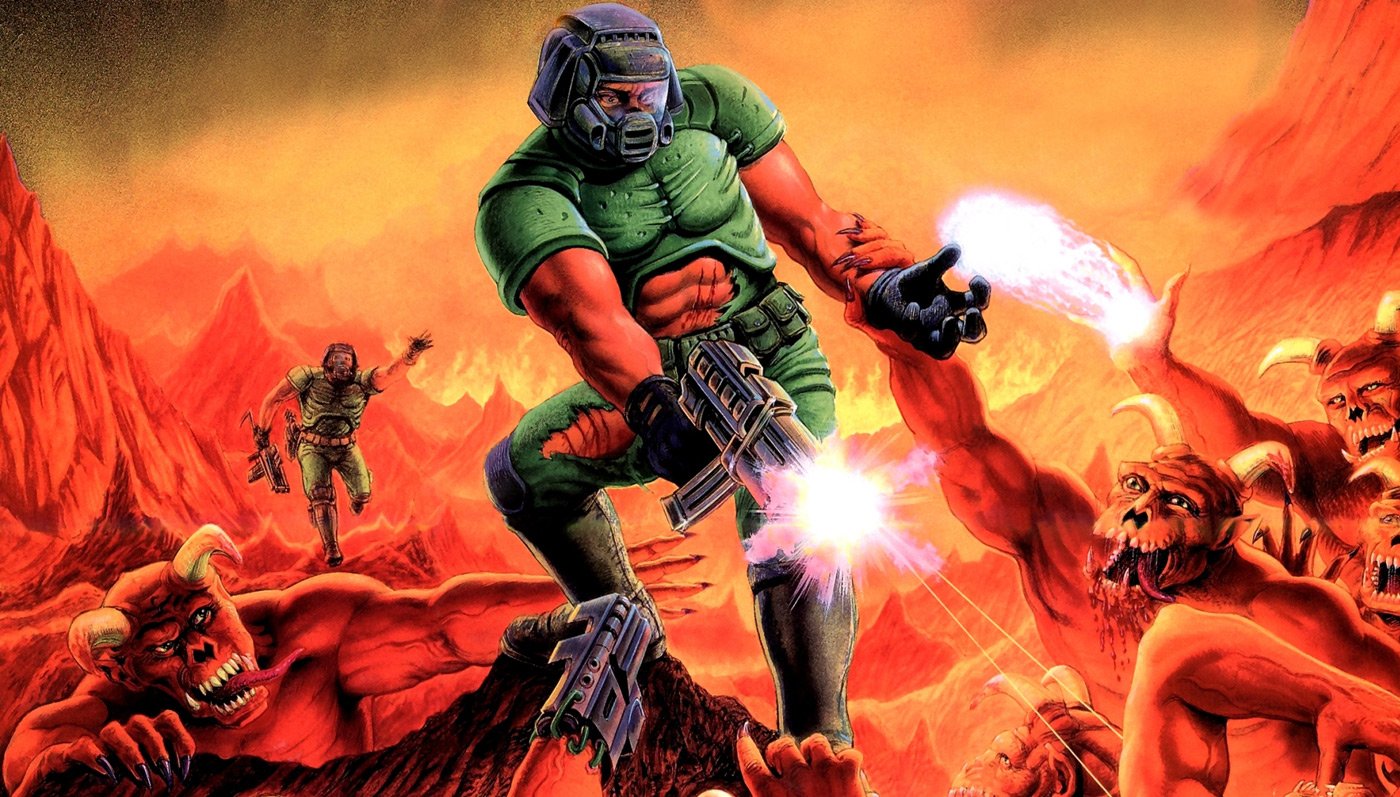 When I look back on the original Doom, I think about the classic PC box art. A portrait of damnation, all blood red and fire orange hues, a palpable threat to the sterile flight-sims and cartoon mascots it was shelved next to. The image of the Doomguy, standing on top of a craggy hellscape littered with demons, unloading hot lead into the mass even as they encircled him. I think of the opening riff of E1M1, a just-this-side of copyright infringing heavy metal anthem that still, STILL, gets my blood pumping. I think of the chainsaw, the BFG, the satanist trappings, and the brazenly defiant attitude of ID software, sneering at the congressmen and big-hatted church ladies who labeled the game a moral hazard. Chumps.

Then I remember playing the game. Carefully looking at the minimap for secrets. Cautiously moving forward, memorizing enemy placements, redoing areas to make sure I finished each room with as much, if not more, health and ammo than when I went it. A slow, steady campaign of optimization and completion.

The original Doom was great, I’m not trying to re-write history here. But, it wasn’t as great as it wanted to be. Like a young punk band still depending on one of their dads and his minivan to get them to their shows, it wasn’t the nightmare celebration of nihilism, violence, and catastrophe that it imagined itself to be when it closed its eyes. 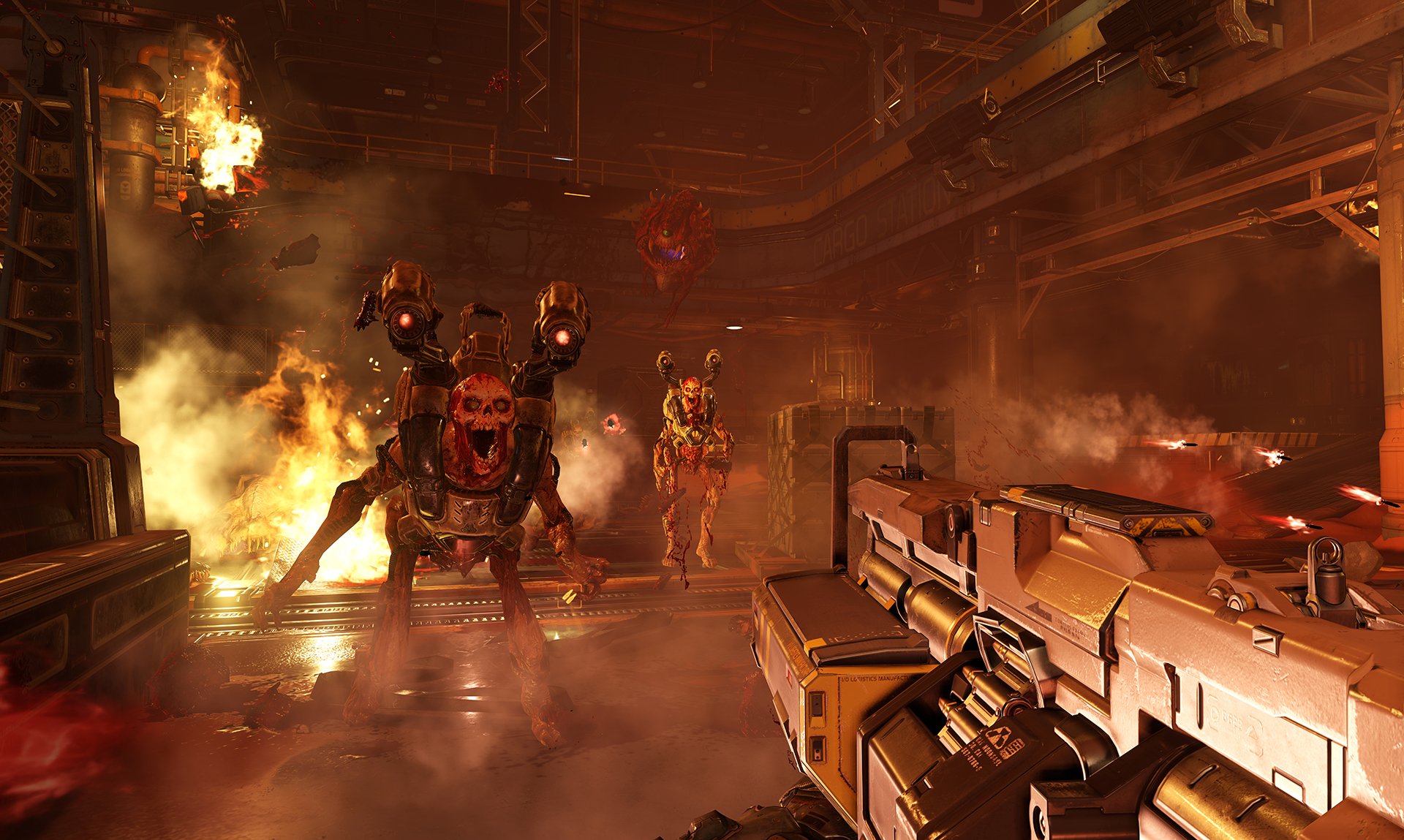 It took 23 years, but using the same basic parts just re-wired and mixed differently, Doom (2016) finally delivered on those dark dreams. It finally found the sublime mania it was always chasing. Every fight in the latest Doom is a recreation of that original box art, of a man surrounded by demons on all sides insanely throwing himself further into the fray.

Saying Doom (2016) captures the spirit of the original isn’t enough. This isn’t mimicry, or imitation. This is finally giving voice to the idea of Doom. It’s the game you always wanted to play when you were playing Doom whether you knew it or not.