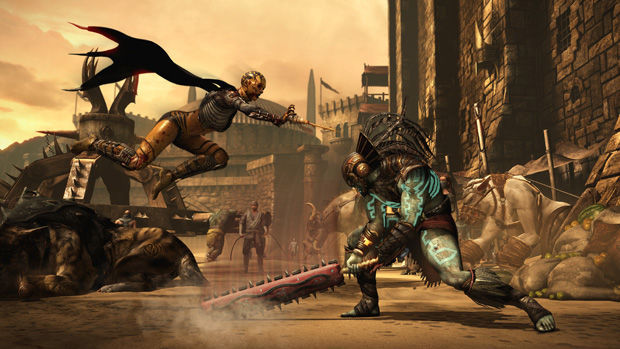 I got to play Mortal Kombat X for a half hour during PAX Prime, and that made me happier than a pig in whatever pigs love to be in. After 5,000 matches played online between Mortal Kombat and Injustice: Gods Among Us, my anticipation was palpable.

Yes, this is an article about my time with the game, but first, it needs to be stated that if you use Cassie Cage’s X-Ray on a male character, you get to watch in X-ray vision as a nut punch explodes a man’s testicles. Mortal Kombat, welcome back.

The biggest additions to the combat system are the character variations. Eachfighterhas three versions,each adding a layer of extra moves and combo possibilities.We’ve known about these for a while, but I never understood why each character wasn’t allowed their full move set. More than adding a few extra moves, the character variants aim to change each fighters archetype. For example, anyone who has played Mortal Kombat 9 knows that Kung Lao was a rush down character. Anyone who has played Injustice knows that Deathstroke is a hardcore zoning character. With MKX, variations can make a character more zoning friendly in one fight, rush down in the next, or maybe a grappler in another. The character variant you choose even goes far enough, on some characters, to alter frame data on their universally availablemoves, in order to support the variation you’re playing with.

Less talked about is the pace of Mortal Kombat X, which seemsmuch less zoning friendlyby design. For thoseunfamiliar, zoning is when characters fight from distance with projectile attacks. This play styleis generally looked down upon asmatches can easily devolve into long bouts of spamming projectilesfrom afar. PreviousNetherrealm offenders include Deathstroke in Injustice, and Kitana in MortalKombat 9.For Mortal Kombat X,D’Vorah, for example, whose play style seems more zoning based,hasa great deal of telegraphing on her projectile specials. She makes up for this with an array of quick stinger strikes that can hit from quite a distance, but these moves don’t reach more than a fast dash away. Adding to this is a new dash meter that restricts players to only dashing twice in or out. The meter is on a relatively short cool down, but in a genre where success is measured in individual frames, the implications could be huge.

The dash meter alone does much to make hard zoning a much less viable option, as you can’t get the necessarydistanceas fast.On the one hand, the meter could be a good thing as — lets be honest — nobody likes dealing with zoning and spammers. On the other hand, I can imagine a scenario where restricting standard movement like this places a greater emphasis on mastering characters who teleport, if only just to have more movement options. Additionally, the amount of screen space fighters can stretch out between each other is noticeably smaller than Injustice, further emphasizing closer engagements — the full length of the stage is larger however, even if it doesn’t feel that way. Ultimately, the changes are made with the purpose of keeping characters close, and the action more constant. Over the course of my matches, it did seem to be doing just that.

All told, my first taste has been a good one. Between the insanely detailed X-rays and fatalities we’ve seen previously, the frame data again being fully available in the options menu, and the conscious effort of addressing spamming, I’m excited to get my hands back on Mortal Kombat X as soon as possible. Also, exploding testicles. Don’t forget that bit.