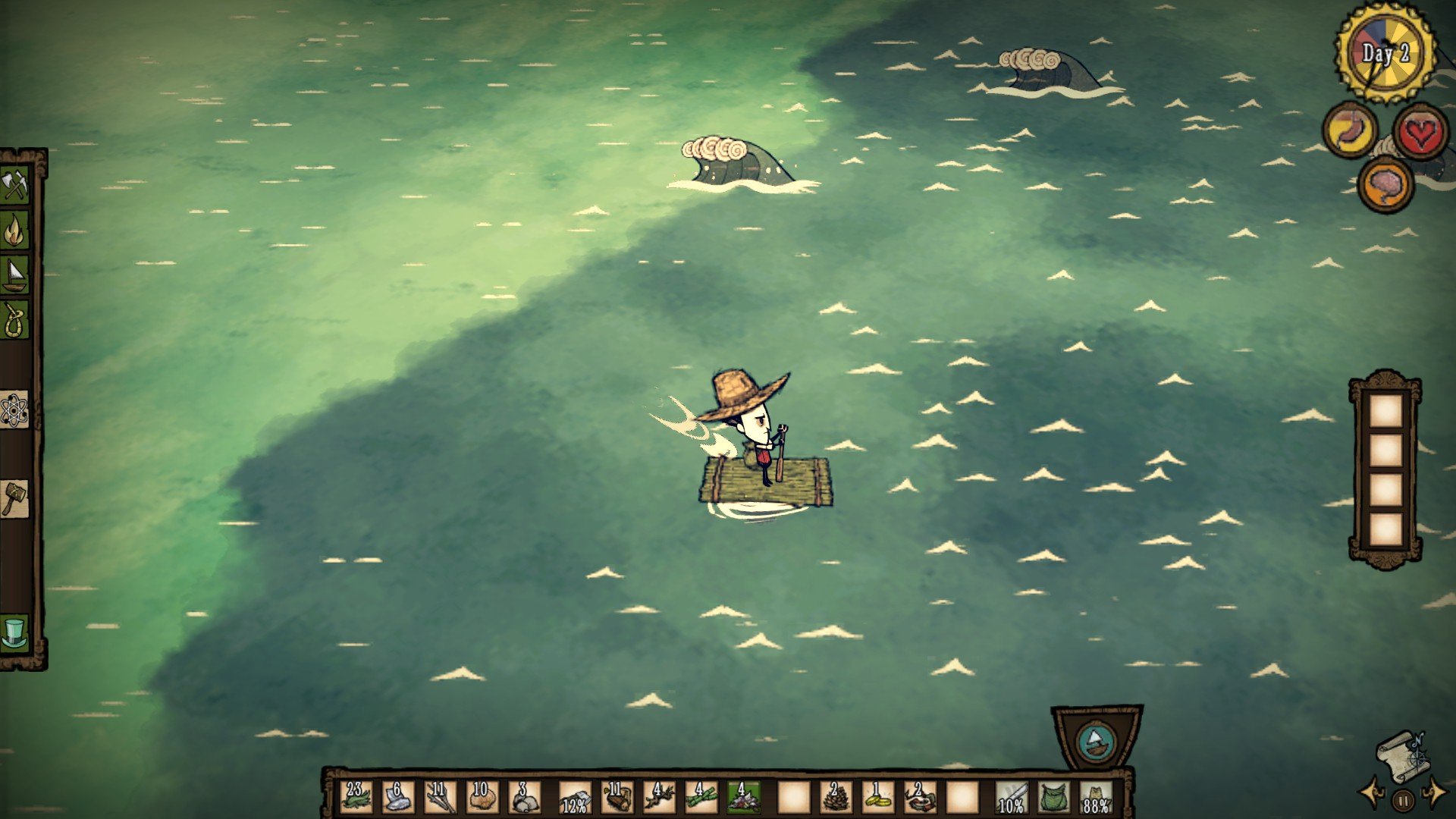 I’ve always wanted to do one of those ‘survival diary’ types of writings, even though that’s hardly an original idea at this point. And what better time to start than now that Don’t Starve: Shipwrecked has come to Steam Early Access?

If you’re here expecting me to talk about the nuances between the original release, the Reign of Giantsexpansion, and this new one, you’re going to be disappointed. I’m hardly a Don’t Starve expert, though I sank a bunch of time into the original game.

Instead, this’ll be told from fresh eyes looking down on a poor little man trapped on an island. I won’t be pretending to be him; instead, I shall be his shepherd. God complex, go!

I began by watching my little man, Wilson, waking up on a shore. Littered among him was the debris of the ship he had washed up on. Where was his journey supposed to take him? I’ll never know (well, maybe I will, with a cinematic or a Wiki page, but I digress). Now wasn’t the time to ponder failed voyages. Wilson was both very hungry, and very lost.

Like anyone who’s led a digital man through a survival fantasy, I commanded him to gather the basic materials necessary to subsist off of the land: rocks, wood, seeds, and berries. Finding these items was tonally different (palm trees, steel drum music in the background) but mechanically similar, until the inhospitable island started throwing snake-shaped monkey wrenches into my plans. Literally: when I had Wilson start chopping down a palm tree with an axe, snakes landed on his head and started chasing him across the minute islet. I convinced Wilson to flee to safer sands, where I then instructed him to fight back. Two snake skins in ‘Lil Willy’s pocket later, I felt I had a good grasp on the situation.

This little nub of land wasn’t big enough for Wilson to call it a home, so after a night of warming up by the fire, I had him make a machete so he could hack apart some bamboo and build a raft. He excitedly jumped aboard, eager to leave this now-useless starting chunk of land behind. Little waves interfered with his paddling skills only somewhat, and an arbitrary directional decision led him east (at least, what I, as the Don’t Starve God, decided was east).

A second island was home to a great many monkeys, who stole bamboo each time Wilson hacked more down, wishing to have extra for an emergency raft. He was probably scared, but murder was in my eyes, so I gently insisted that he chase down the simian supply snatchers. They began throwing their feces at Wilson. I am nothing if not merciful, so I again allowed him to flee and head to a safer spot on this second island. 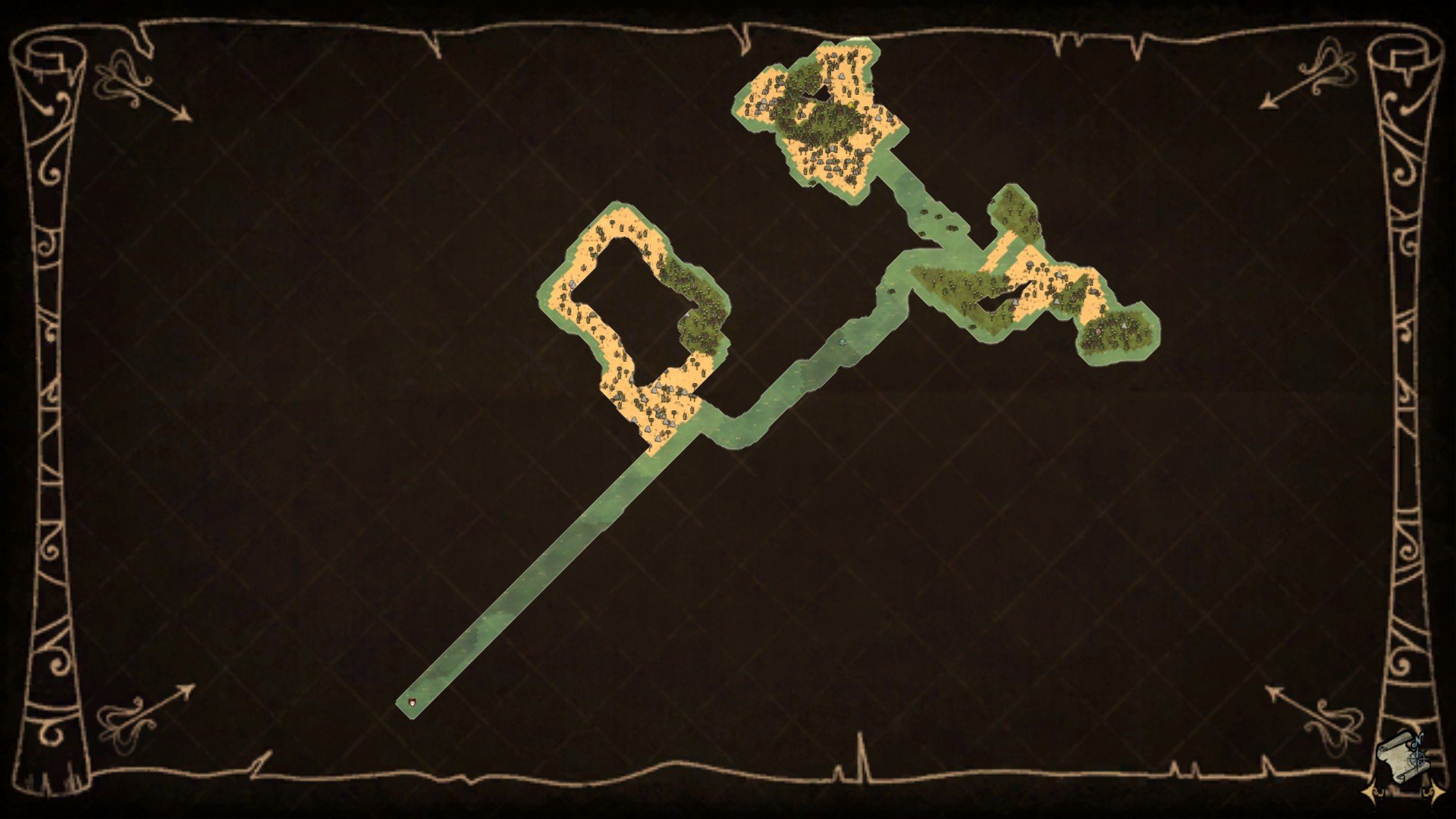 Before fleeing the island entirely, I wanted Wilson to embrace his inner pirate and dig up some of the obviously-containing-treasure piles of sand strewn about. After unearthing twenty or so piles and finding nothing but more sand, I relented and allowed the poor fellow a short respite. It was at this moment that a bird landed right next to him, dropping a gold doubloon for him to scoop up. Renewed by this (and a small meal of roasted coconut), Wilson felt up to rowing to a new island. This time, I pointed southwest. He rowed, and rowed, and rowed. The map above shows his perilous path, where wave after wave threatened to shatter his makeshift boat.

The waves (they call them rogues, they travel fast and alone) were manageable, but the bastard swordfish threatened to end Wilson’s story before we had both decided it was over. Multiple stab wounds had the man at death’s door, but the leaky raft was the more pressing issue. There was nothing to do but continue on, and eventually a huge ethereal fog bank reached its wispy fingers out towards Wilson. Knowing that behind him was the threat of impalement, I opted instead for the unknown. 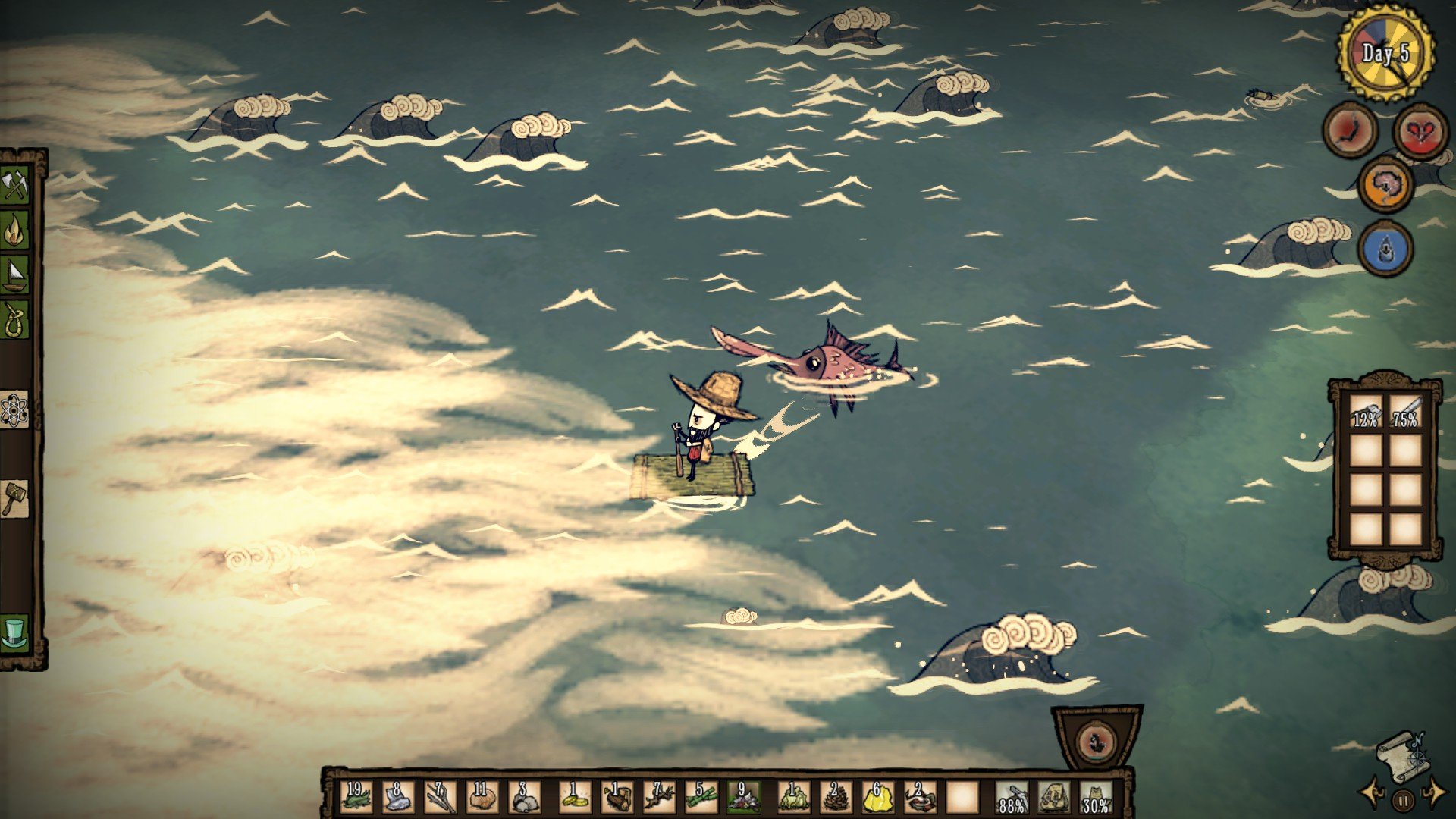 After he stated “something had brushed against [his] leg,” I had Wilson get his bearings by checking his map. This fog had acted as a portal, and had taken him across the world. His brain was not handling this fact well at all, and ghastly apparitions began to float across the sea around him, taunting him, inviting him to jump in. Clinging to his last vestiges of sanity, I had him continue southwest. He nibbled on the little bits of seaweed that drifted by, hoping to sooth the dull ache of famine.

Before his eventual demise, Wilson came across a beautiful coral reef, the likes of which he had never seen. Instead of enjoying their natural beauty, he began hacking them apart and stuffing them into his backpack, dollar signs in his eyes. He might not be able to survive this, but he was going to die a rich man. 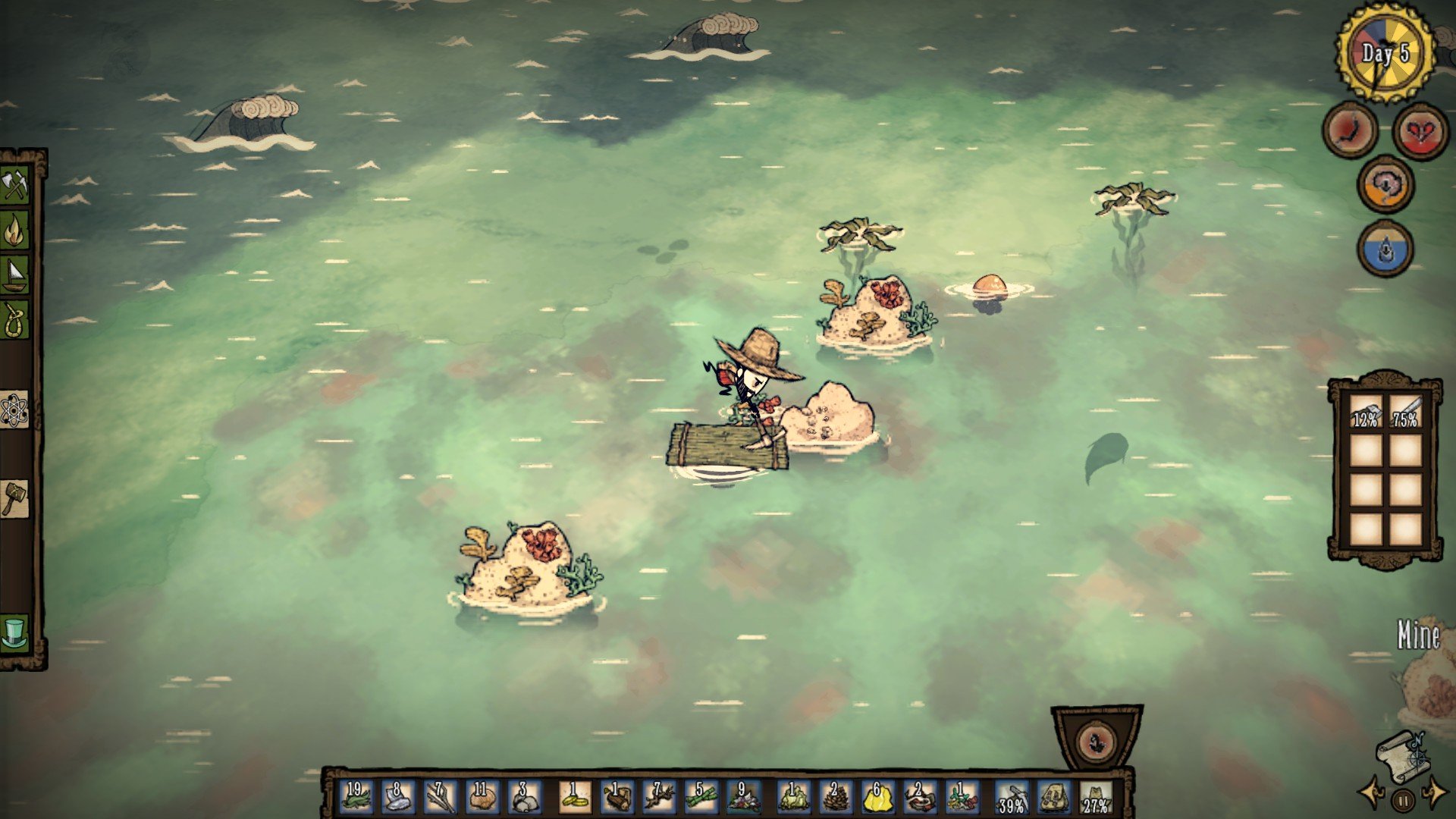 There always seems to be a point in Don’t Starvewhere you unwillingly defy that title. Poor Wilson made it to that moment shortly after finding that reef. With his handfuls of treasure, I decided that it’d be better for him to die at sea (with his mind on his money and his money on his mind) than starve to death next to those shit-flinging monkeys. One more wave was enough to destroy his raft and send him to the depths below. He took it in stride, and even made a quick joke before his watery demise. Thanks for the gallows humor, Wilson #1. I’ll miss you. Your experiences will make your next clone’s life much easier. 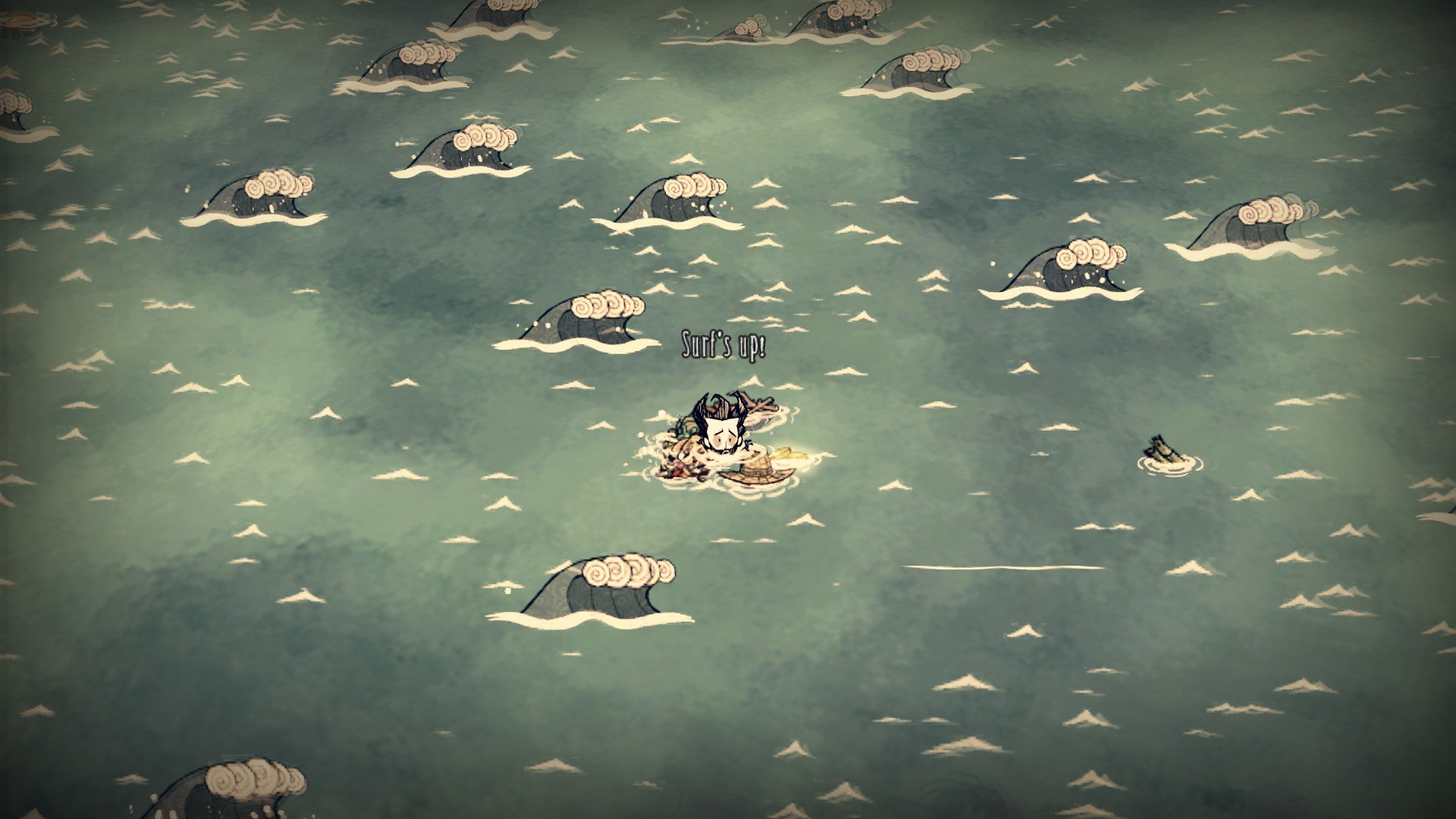