Despite queuing for entrance on each of the days I attended EGX, and even standing in line for Super Mario Odyssey on its UK debut, the queue for Assassin’s Creed Origins was easily the longest line in terms of duration (though it still seemed slight compared to the three-hour-plus queues for Shadow of War and Call of Duty, both of which I declined to join.)

I really enjoyed Assassin’s Creed II, but I wasn’t compelled to complete any of its sequels, despite starting three of them. Still, I have no aversion to the series. AC II was fantastic, and I was looking forward to setting foot into mystical Egypt for this latest jaunt through the Animus. 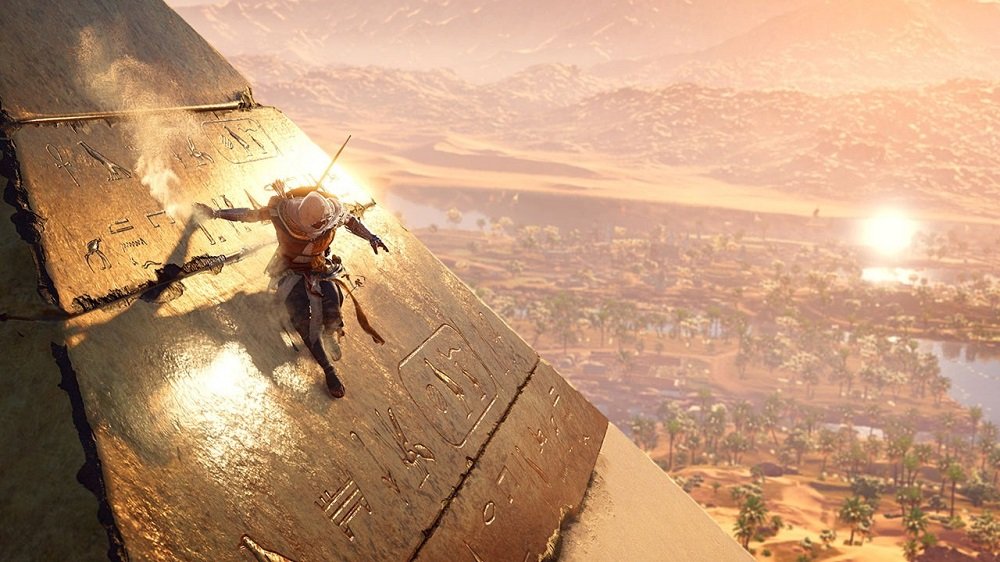 After a little over an hour of queuing, I was hurried into a small area adorned with polystyrene rocks and palm trees, before being sat at an eye-searing distance from a large screen. I had about fifteen minutes to step into the shoes of new protagonist Bayek, as he rode into a quiet, isolated town, located in the searing desert sun.

The land of Egypt looked great, the bright sun beamed mercilessly off of the dunes and ramshackle buildings, giving a genuine atmosphere of oppressive heat and blinding light. It recalled the plains of MGS V: The Phantom Pain in its uncomfortable, but immersive humidity. Everything gleamed in the sun’s warm glow. It looked stunning.

Then, it all started moving, and something went very wrong.

There was tearing on every swing of the camera, animation would twitch and jerk, and the framerate took an absolute nosedive once Bayek approached a small coastal town which, although lovingly detailed, featured villagers stuttering around and small animals clipping through buildings and scenery. The performance was ugly, real ugly. 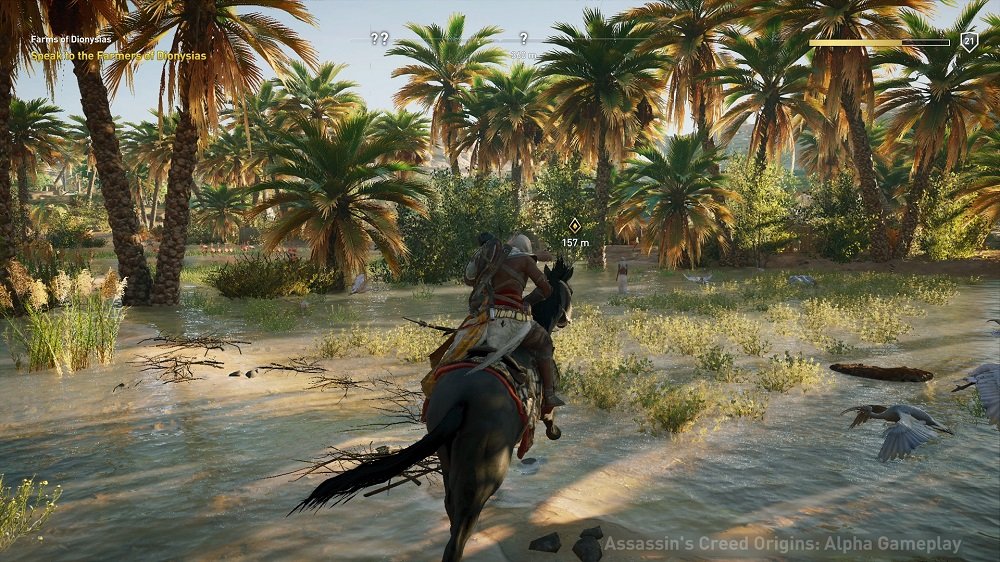 Dismounting his horse, Bayek approached a priest, who was ruthlessly beating a young ward for allegedly stealing two statues. After asking where said statues were, and being directed to a beautiful ship on the ocean, Bayek assumed the boy’s innocence and dove off of the pier to investigate. Hitting the water felt oddly “refreshing,” another sign of the game’s immersive environment.

Bayek climbed on-board the ornate galleon and got to work in typical Creed “stalk ‘n’ stab” fashion. I found one of the missing statues, then purposefully raised an alarm to cause chaos, before climbing the ship’s mast to its highest point, firing a few arrows in harm’s way, and diving back into the cool seas. Away from land, the framerate had improved somewhat, but the screen-tearing remained a frustrating distraction.

I used one of Origins‘ new mechanics to track down the second statue. Calling Bayek’s faithful eagle companion, I took direct control of the bird, flying it out over the ocean. The eagle was able to pinpoint the location of the missing statue, hidden underwater in a sunken galleon. Bayek dove into the depths of the deep blue and retrieved the missing treasure. 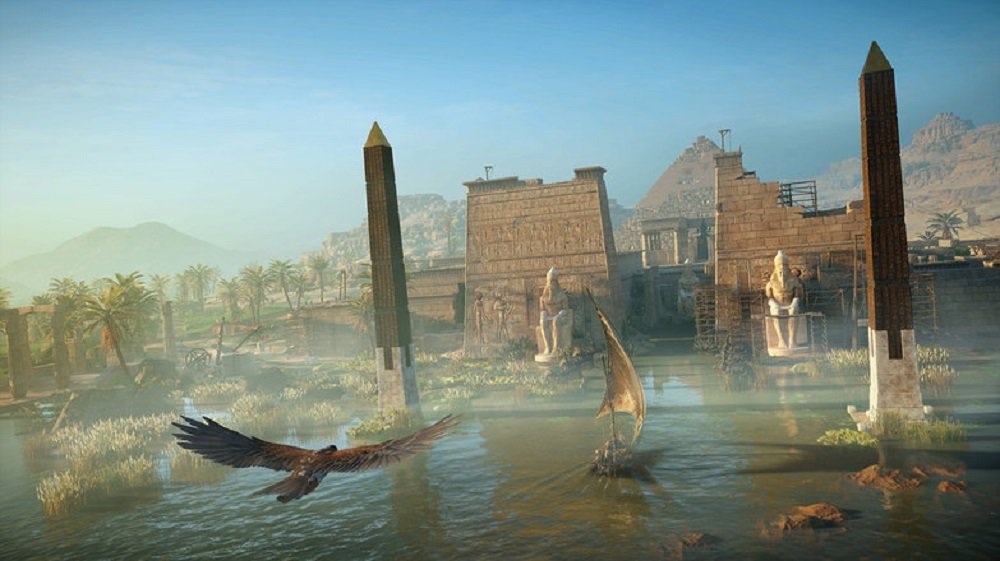 Now Bayek had both statues, he returned back to the less-than-Godly priest. Arriving ashore, an NPC climbed directly onto Bayek’s head, like you would a table, then glitched the fuck out, and fell off. The sweltering heat is is clearly taking its toll on the locals of the rinky-dink town.

Far from being pleased to get his statues back, the priest clobbered the innocent boy upside the head and proceeded to insult Bayek’s bloodline, leading to a vicious/clumsy sword fight. At this point, guards were glitching in and out of scenery with reckless abandon, so I chose to mash my way through the affair, finding the game’s technical flaws far too distracting to capture the dramatic intent of the action.

Once Bayek had dished out his brutal street justice, I had him mount his steed and race out of town through some thick greenery. As hard as I had tried, and I honestly tried, the tearing, clipping, and framerate issues had totally sucked the fun out of the demo, and when the entire game actually froze for a second or two mid-gallop, I was convinced that I must have chosen a faulty setup.

I poked my head into other player’s games, but they too were experiencing a world that seemed to be severely straining under the weight of its own visuals. Regardless, at this point my time was up, and the game was automatically reset for the next group of eager fans. 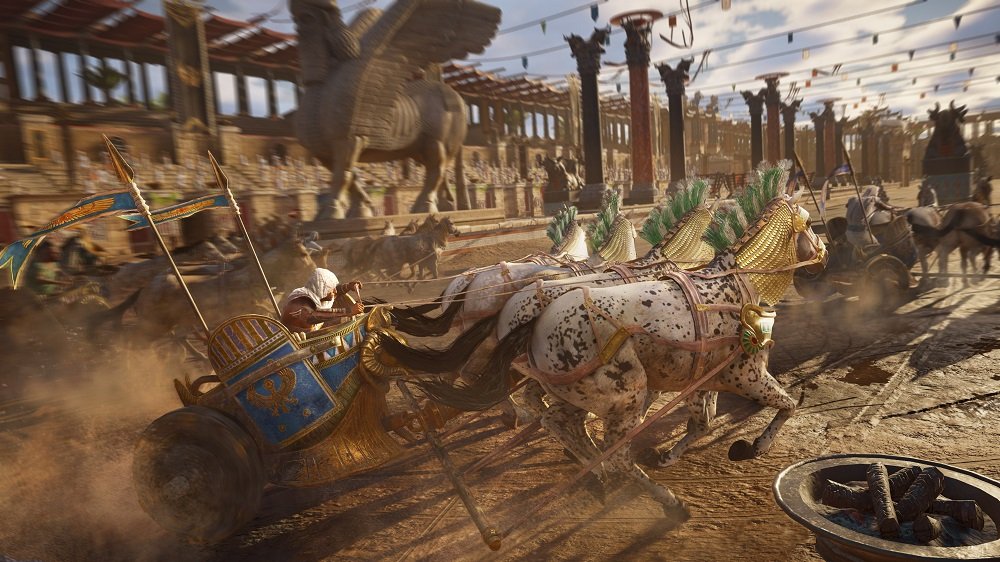 There was a large stamp at the bottom of the screen: “Alpha Gameplay,” but I left the booth genuinely puzzled. Why, mere weeks from launch, would Ubisoft demo such a shoddy build? If you wanted to showcase your next million-dollar maker, why let people play a game that featured animals stuck in scenery, screen lock-ups, and NPCs parkouring on your protagonist’s noggin?

Then again, what if your Alpha build, and your release build, weren’t all that different…?

I think Bayek seems like an honourable and likeable protagonist, the Eagle mechanic bears further investigation, and Ancient Egypt looks like a beautiful but terrifying open-world to explore, maybe the most vast the series has seen. However, I’m seriously concerned with the performance of the build I played, which was not good enough to showcase to the public in order to hype your impending release.

Maybe it really was just an early build. Maybe they just didn’t have the time or resources to put out an updated demo, or even a truncated version of the final game.

I always give the benefit of the doubt to developers, especially in previews, and I always want fans to be happy with titles that they are hyped for. As such, I genuinely hope it is the latter, because to release Assassin’s Creed Origins in the state that I played it, would not only be disappointing, it’d be downright insulting.