But leaves the Gundams

The 2 on 2 Gundam vs. Gundam series is as big in Japan as that full-scale Gundam model in Tokyo. It’s also big on the Destructoid Forum, in that one Gundam fan keeps explaining how it’s the best fighting game and tries to get people to import it. I’m more of a Gundam Battle Assault 2 kind of guy.

Anyway, Namco is taking the format of Gundam Vs. and bringing it west with a new IP, the free-to-play Rise of Incarnates. Because the 2 on 2 format is a bit different for Western audiences, Namco went with a F2P model to build a player base.

And you know it’s been developed specifically for the west for several reasons. First, the initial stage being shown off is New York, with the post-apocalyptic staple crumbling Statue of Liberty. Second, there is a blond character with big hair. He looks just like us, my fellow Americans, with his rock and roll nonchalance and red leather jacket.

Though he turns into a monster and there is a mad scientist who rides on a tidal wave of corpses.

Rise of Incarnates will feature more than four at launch, but we were shown Mephistopheles (a transforming character), Ares (a summoner), Lilith (an agile transformer), and Grim Reaper. The latter is the best because he summons zombies and can ride on a tidal wave of them.

These character designs come from Soul Calibur and Tekken veterans who have teamed up with Gundam Vs. veterans for Rise of Incarnates. It’s going the fighting game route of having its four payer battle arenas staged in famous cities — London, Paris — so hopefully we get a little less gray throughout the rest of post apocalyptia.

“We’ve been developing this game for some years now and we’ve done a lot of market research as well. Some of the gameplay mechanics we found were still viable to western audiences, we kept and refined, but a lot of times we discarded them for something completely new. A large portion of the game is quite different from Gundam,” Rise and Gundam Vs. producer Ryuichiro Baba explained.

It also runs in a different engine. Because it’s a “new game for a new audience,” there will be some general streamlining of more technical aspects of Gundam Vs. “The depth is still there, but it’s more accessible.” A familiar promise.

“Fans who played the Gundam Vs. series, they’ll be able to pick it up and they’ll get it pretty quickly,” but the simplicity of the controls, standard across the characters, should allow anyone to try it out. “It’s not like fighting games where you have to spend quite a bit of time learning the moves and such [for each individual character].” 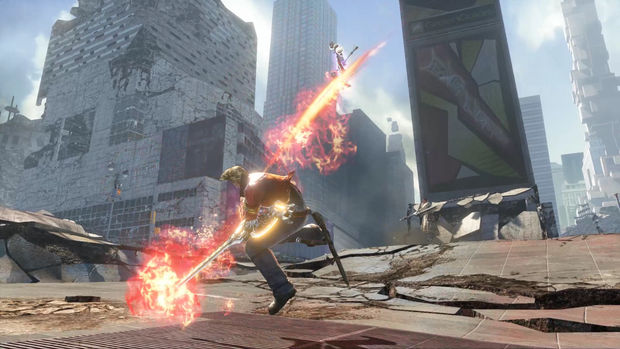 Rise of Incarnates has been in development for several years. Namco Bandai sees itself as a late comer to the free-to-play market and, because of this, it has seen and learned from the missteps of its peers, explaining it was, “very sensitive about what users want,” and would continue to iterate based on player feedback.

The first step was the most obvious: the monetization is largely cosmetic (buying outfits), side-stepping the “pay to win” stigma. But messing up that one at this point is like stepping on a rake. The real question will be if Rise of Incarnates can avoid an entire obstacle course worth of rakes. You can get some idea when it enters alpha testing.