Imagine the exploratory experience of Journey, the first-person puzzle solving of Myst, and the look of the world of Avatar, all mixed together in one new game. That’s how Storm in a Teacup’s Executive Producer, Alberto Belli, describes their upcoming title, Nero.

They call it a visual novel, though it’s nothing like the Japanese text-based titles you might imagine from that label.

What I saw of Nero was dark and magical, lit only by bioluminescent plants and creatures. The world is a projection of the mind of a boy that wanders through it. As he walks, neon orbs of color are carried in the wind in the night sky, giving just enough light to show a faint path through lush forests and grasslands. A game cinematic showed the boy crossing a bridge over water as a beautiful, massive glowing jellyfish rose up in the background, with its light glowing behind him. While still early in development, Nero is already gorgeous. The look alone was enough to get its hooks in me.

Nero is a first-person game where exploration is tied directly to the story, and discovery continually brings new story revelations. You play as a boy that journeys to follow an adult through the world in an effort to learn more about this person as well as about himself. Both the boy and the adult he follows are hooded and robed, and both are completely silent for the entire game, which makes the experience even more mysterious.

While the characters are silent, the game will be fully narrated, just as you’ll hear in the above teaser trailer. They teased some unnamed Hollywood talent for the narrator during our meeting. 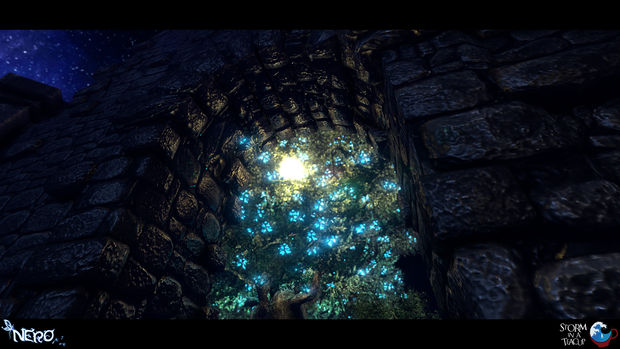 The boy’s discoveries tie into to world-based puzzles that look to use different aspects of time and light. Completing the main puzzles will reveal story elements, while others will unlock mementos that uncover background details on their story. Belli revealed that there will be branching story lines and multiple endings for Nero.

Nero’s puzzles looked to be right in line with what you’d see in a game like Myst. One seemed to have the boy firing a light projection from his hand toward hour indicators on a rock formation (think Stonehenge) to match clues found earlier in the level. It seemed that setting these so that light and shadow fell in particular places was the key. These same spherical light projections are used in other places in the world to interact with the environment. Belli said that we’ll see that every single puzzle is tied directly to Nero‘s plot. 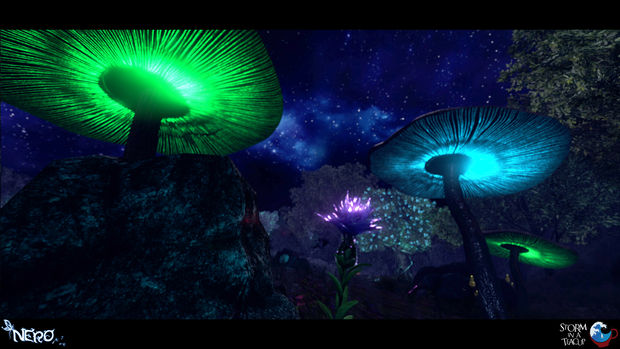 Belli, alongside producer Giulia Zamboni, were happy to show off their game and detail its features, but they were very careful to avoid revealing any details on Nero‘s story. From the gameplay I saw, it’s clear that there’s some kind of connection between the boy and the person he follows. But he seems to keep his distance while following; I sense some hesitation. Again, both are in robes, and they look somewhat ceremonial to me. They’re headed somewhere, but with only seeing one stage and a tease of another, it’s hard to make any solid guesses as to where they’re heading. All I could pull out of them is that the story centers around love and family.

So how is it like Journey? Belli says that the relation will become clear when we have more details on the story. He says that like Journey, players will each have their own interpretation, and that they’ll be left with lingering thoughts after play is through. They expect that players will continue to discuss the story on forums well after they’ve finished, sharing their thoughts on it with others.

What’s amazing is that Storm in a Teacup created the gameplay they showed me in only 25 days. The company only opened in October of last year, and concept and design work began then. The focus at that time was building the office. But they’ve recently pitched the game to a couple of publishers, and after some heavy interest from an unnamed publisher, they scrambled to get a proper showing together for this month. 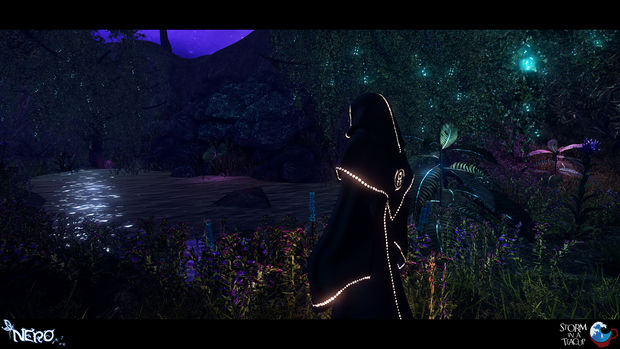 The team is based in Rome, Italy, but they’re fully international, with members from UK, Sweden, South Africa, and other locations. Each member brings AAA game making experience to the team, coming from studios like Eidos, Bethesda, Ubisoft, among others, working on games like Crysis, the Batman titles, Assassin’s Creed, Watch Dogs, and others. As a first-person game, Storm in a Teacup thought it would make for a fine virtual reality game, so they’ve started down the road of developing for Oculus Rift and other VR platforms. Aside from PC, they say that a console release is possible.

And Nero should sound as good as it looks: Sigur Ros is slated to record the soundtrack of Nero. Storm in a Teacup feels that music and sound are an important part of setting the tone for Nero, so they are aiming high.

Just on mood and setting alone, Nero looks like something I’d definitely be into. Their teases on its story were highly effective on me. We’re hoping to get some time to explore on our on soon.