Cruising on the Famicom Disk System this Famicom Friday

For this Famicom Friday, I think it’s time to jump straight to the Famicom Disk System. You may worry we’re moving too fast, but I’ve never felt this way before about anyone; I’m ready to take the next step in the relationship.

Once again, we’re looking at some of the games that we never saw here in the West. The world of Famicom was a much different place than the one we saw through the lens of the NES. From absolutely bizarre concoctions that defy logic to literally, actually karaoke, the Japanese really knew how to rock their 8-bit console. If you haven’t yet taken a look, let us open the door for you and show you around. 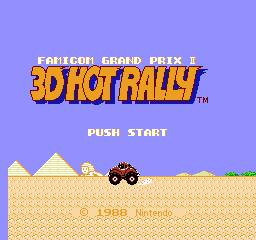 I’ve always loved a good raster racer. From OutRun to Top Gear, I can’t get enough of that pseudo-3D effect. Admittedly, there’s a certain monotony to these, but I get a lot of comfort from those gentle corners and rolling hills. Famicom Grand Prix II: 3D Hot Rally, a game that released exclusively on the Famicom Disk System, is one I frequently go back to.

Although Famicom Grand Prix II: 3D Hot Rally is technically a sequel, it bears little resemblance to the first Famicom Grand Prix. Whilst the latter is a top-down light F1 Simulator, 3D Hot Rally is a long-distance trek across rough, often off-road terrain with the view nestled directly behind your car. There’s very little that connects the two games aside from four wheels and a road. 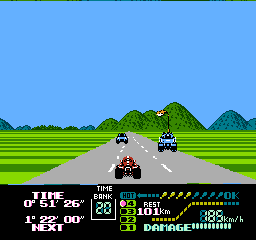 3D Hot Rally follows the OutRun formula. You’re tasked with making it to the end of each leg of the journey within a certain time limit, but a few tweaks make it more of an endurance challenge. It consists of three long tracks that split off in various configurations. You can generally choose which path you take on the fly, but at the outset, you’re provided with a map that shows all the routes. Before the race starts, you’re asked to place a pit stop on one of the intersections, and if you manage to navigate through it, it will top up your health gauge.

It’s a nice bit of strategy since you’ll doubtlessly take some damage along the way, and if you don’t watch your driving, you’ll wind up broken down at the side of the road. So whether you place it near the end of the race to get you through the last leg or somewhere in the middle where you know you’ll be hurting can make all the difference. Just make sure you remember the route, or you’ll miss it entirely.

Adding to the strategy is the placement of “hot points” on the track, which fill a gauge as you pick them up. Once you have enough, you can temporarily switch into the “hot dash,” a fifth gear that acts as a boost. Obviously, you’ll want to reserve this for times when you know you’re not going to smash into the scenery. 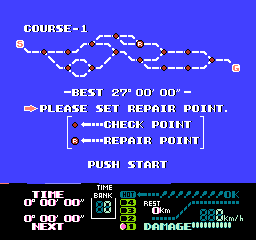 With only three similar tracks and three unique cars to choose from, 3D Hot Rally can be a pretty short-lived experience. There’s no special campaign mode to keep things progressing, but being on the Famicom Disk System, it can save your best time, giving incentive to find the fastest routes on every course.

You may assume that the ”3D” part of 3D Hot Rally refers to its pseudo-3D, raster enabled perspective, but it’s actually because it could be played with a special 3D glasses peripheral. Turn on the 3D effect without them and you’ll be treated to a broken, flickery mess, but with a pair in place, you’ll witness the splendor of depth. Speaking of which, the game has a weird flicker to its HUD. I didn’t notice it until I took screenshots, and it only appeared as a black bar in some of them, but my husband said it was hard to look at for him on a CRT TV.

One more interesting note is that the game came out on a special blue disk that signifies that it’s one of the games in Nintendo’s fax series. What this meant is that you can save your best times to the disk, take it into a special kiosk at participating stores, and fax your achievements to Nintendo to be entered into a contest. You could win a Disk-Kun stationery set, and I wish I had one! As you can probably guess, this contest is no longer ongoing, but the menus for it are still in the game. 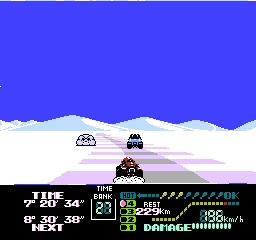 A bit of Japanese may be required to navigate the initial menus, but if you can feel your way through them, then you’re off to the races. Almost everything else is in English, but if those menus are too much of a barrier, there is a fan translation available to demystify them.

3D Hot Rally never made it to North America, and as far as I could find, it has never been re-released in Japan. It’s rather strange, since Mario and Luigi make appearances, and one of the cars, the Monster, has been represented in Mario Kart Wii as the “Tiny Titan.” Yet, despite Nintendo making a few references to it, it has remained parked on the Famicom Disk System.