Which means I wanted to play it about a dozen times

Devolver Digital had a great showing at PAX East this year. Though Hotline Miami 2 might have had the most buzz going in, not long into the show people were shouting about Not a Hero. Developed by Roll7 (of OlliOlli fame), it could just be the next pixel shooter juggernaut.

Though its visuals are beautifully retro (complete with the neon pink and teal color palette that is in vogue right now — though each of the game’s five districts will have a different look), its gameplay takes cues from more modern shooters. Specifically, Not a Hero features a cover mechanic, and it punishes players who do not use it well. 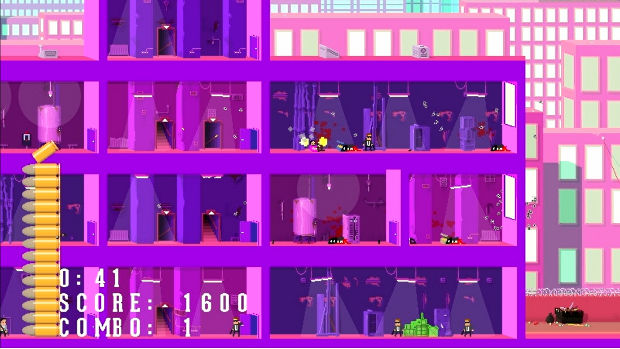 At first, Not a Hero seems fairly simple. In addition to standard movement, there are buttons for shooting, reloading, sliding, and context-sensitive actions. The PAX demo featured three non-heroes: a well-rounded pistol wielder, a low ammo shotgun bearer, and a super slidey machine pistol holder.

It only takes a few bullets to the chest to be defeated, so cover is key. Fortunately, buildings are rife with desks to duck behind and alcoves to sidle into. Enemies can use cover just as the player can, so even a simple one-on-one battle can turn into a cat-and-mouse game, in which each party is counting shots and waiting until the other reloads.

To that end, the slide maneuver is much more useful than it initially seems. Not only can the player slide into enemies to knock them down, but sliding also automatically sticks the player into cover, providing him with a fast method of moving while staying relatively safe. 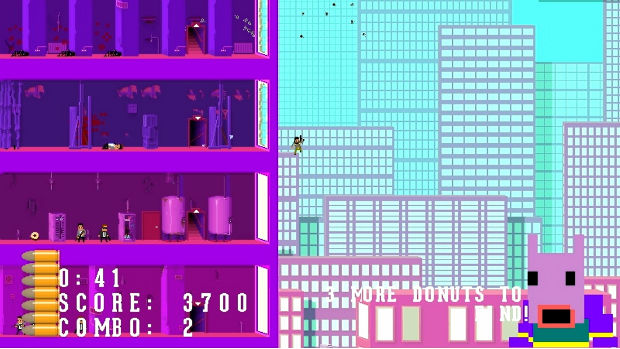 The first mission was straightforward: clear a building of enemies. Even so, it took a couple of tries to get a hang of the mechanics and complete it. After that, the player is dropped from a helicopter onto the roof of a much larger building, tasked with putting up posters of Bunnylord. With more dense enemy placement, this mission was particularly difficult; through about ten tries over all three characters, I was able to get close, but never did get the last poster up.

Near the spawn point, there was a random cache of explosives to pick up. I saw remote mines, proximity mines, nail bombs, and others. More often than not, using the explosive resulted in my own death, but with some practice getting into cover, I could see them being useful for clearing out rooms without putting myself into too much danger.

Not only do the different characters have different weapons, but they also have different abilities. The shotgun can be used to knock doors off hinges and into enemies, or to knock enemies into other enemies. This only stuns the enemy that was hit second; the player still needs to get close and execute. The third character was probably the most fun for me, despite the fact that he seemed to get killed more easily. He slides much further than the others, and can also fire his machine pistol while sliding. Not a lot is more satisfying than sliding into a room while lighting it up with every bullet in the magazine. It was a very John Woo experience, minus the white doves. 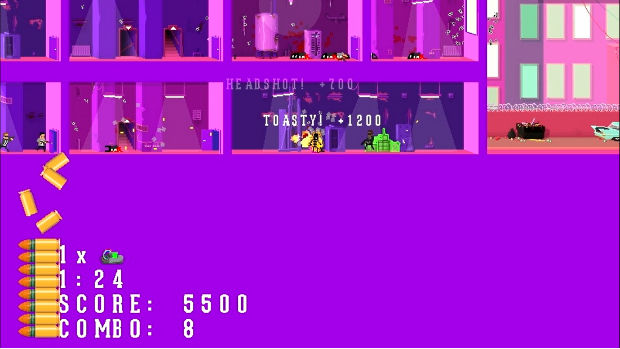 For advanced players, there are scoring and combo mechanics in place, which introduce a risk/reward element. Players score more points for close range kills, but put themselves in greater danger to do so. On top of that, the combo system builds up for each kill made without taking damage, which emphasizes the importance of cover and adds more risk into the decision to close in for a kill.

However, it will take some time before players start considering score. Not a Hero was brutally difficult, in part because of the awkward keyboard control shown on the expo floor, but largely because of the unexpected level of strategy required to tackle it. That difficulty, and the emphasis on finesse at high level play, might just give it a lot of staying power. It is fitting that it was being shown alongside Hotline Miami 2, because it has the potential to reach that level of popularity.