A world worth blowing up, but not exploring

I’ve been playing Titanfallquite a bit in the past week or so, to the point where I’m about ready to Prestige soon. It’s an enjoyable multiplayer game with some flaws for sure, and as a general rule FPS fans will have fun with it for weeks to come.

But there’s been one major polarizing aspect of Titanfall, even for fans — the campaign. Rather than provide a proper story or solo set of missions, the campaign is built entirely into the multiplayer component. Meaning, you’ll need to connect online, find a game, and essentially play a modified multiplayer match to “see” the story.

That would have been fine, if the story or the world were worth exploring. But they aren’t. 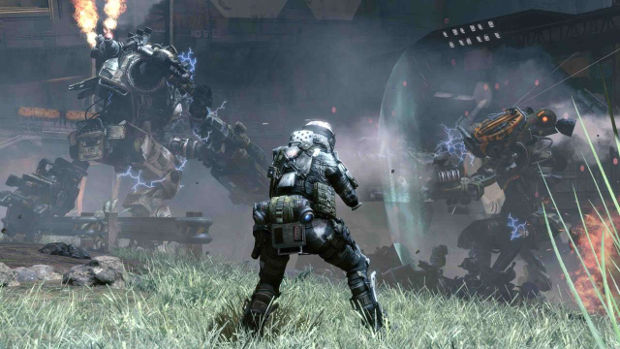 After speaking to a number of players who completed the campaign, there was a resounding amount of responses that claimed that they didn’t understand the story. While I didn’t consider myself completely lost, I have to mostly agree — “what story?”

Let’s hear how the narrativeshouldimpact someone from Respawn’s point of view. On the campaign, Respawn senior map designer Mohammad Alavi states in an interview with X-One,“We’re telling a story through a first person perspective in ways that are both traditional to single player campaigns and very new for multiplayer… at least for first-person shooters. Without going into too much boring detail about client/server logistics, asynchronous scripting, and other buzzwords, I can tell you that from the end user experience it feels both familiar and groundbreaking at the same time.”Half-Life was even name-dropped.

But the finished product simply does not match the description. Here’s how it actually plays out.

You’ll experience the story as the either the IMC (Interstellar Manufacturing Corporation) or the Militia — which are barely given any real motivations or anything to have you invested in either one from the get-go. In the matchmaking lobby for the first mission, you’re given a small briefing on what to expect from an official on either side (for example, a fueling run in the first level). Then off you go — into a Hardpoint (Domination) “capture the points” map. Then you’ll just play that Hardpoint match, and at the end you’ll get a few seconds of dialog like, “oh man we totally missed out on that fuel, onto the next map!” or, “good work soldier, we got the fuel, onto the next map!” Then some “important” story character will pop up and basically try to explain why they’re important.

Yep, that’s essentially as far as the story goes throughout the game. In the aforementioned level the IMC needs “fuel,” so you need to capture the points just like any old multiplayer game to get it. The characters that tell you your Titan is ready throughout the other modes are peppered in, but there is no reason given as to why we should really care about them — they merely add to the presentation and are present for seconds on end before a match starts.

Let’s look at a few of the specific claims by Respawn as to how the campaign innovates within the genre. Here’s another quote: “In the [Fracture] E3 demo we saw how your ability to capture and hold the hard-points directly led to the fate of the Redeye capital ship. That’s not a story element that plays out the same way each time. You control whether that ship and its captain lives or dies.”

On paper, that sounds really, really cool, doesn’t it? But here’s the problem: not only do you not care if the captain lives or dies, but the difference between a win and a loss is around 10 seconds of inconsequential story. No matter what happens, you’re ferried off to the next map, ready to punch some robots and blast some dudes. Again, blowing up stuff is fun, but not nearly as dramatic or groundbreaking as Respawn makes it sound.

Here’s one more claim: “From picture-in-picture updates from NPCs, events that unfold in-game, to the AI soldiers reacting on the ground, the narrative unfolds naturally and ties in seamlessly with the gameplay. Along with the main story arc, major and minor characters react and acknowledge your direct actions, creating a personal experience crafted just for you set in a larger framework.”

This happens to some degree, but very cheaply and is more smoke and mirrors in nature. As I stated in my review, the AI can be detrimental to the game because of how poorly designed they are. Often times, the AI soldier’s “reactions” involve staring at a wall, or standing in the middle of a wide open space aiming their guns at a rock. The “seamless” narrative is basically the same audio cues as any Call of Dutygame, like when Ice Cube shouts “capture the point, we’re losing fellas!” in Black Ops. It’s a littlemore flashy than that because of some technical wizardry, but not by much.

At the end of the day the campaign isn’t offensive, because I still had fun playing the core multiplayer matches that were built into it. But if the intention was to create interest in the world, its characters, and its narrative — it failed. For me, punching a bunch of giant robots with another giant robot and flying around with a jetpack is damn good fun. But if you’re looking for something more than that, don’t look to Titanfall.