Ori and the Blind Forest is a beautiful metroidvania

And it plays beautifully too

Before I was able to play Ori and the Blind Forest, Microsoft Studios producer Daniel Smith rattled off a list of influences for the game, which sets lofty, perhaps unreasonable, expectations. He cited the works of Hayao Miyazaki, Super Meat Boy, Limbo, and Metroid. Though each has achieved greatness in its own right, the grouping is a strange one.

Imagine my surprise and delight to find that the influences are not only clear, but that they work wonderfully together. 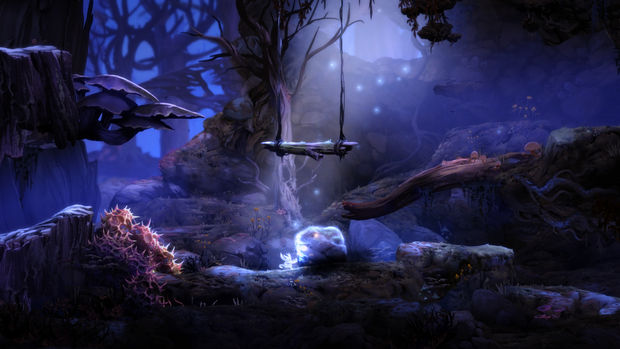 The most obvious result of Ori‘s influences is that from Miyazaki. The environments are stunning in their beauty, each hand-drawn and unique, with a generous use of color. In motion, it looks even better, with scrolling and lighting effects that play with the two-dimensional artwork well. As a more direct reference, one of the characters shown in the demo bears a striking resemblence to Spirited Away‘s No-Face. Miyazaki’s influence can be felt in the themes as well, which deal with life, death, and the beauty of nature.

It may seem difficult to reconcile the beautiful artwork with a Super Meat Boy influence, but that shows up with the way Ori handles. The little forest creature dashes with impressive speed, and the platforming control is tight. I was able to immediately get a feel for its capabilities, and I never missed a jump that felt like the fault of the control. Super Meat Boy‘s essence may have also contributed to the difficulty, but more on that later. 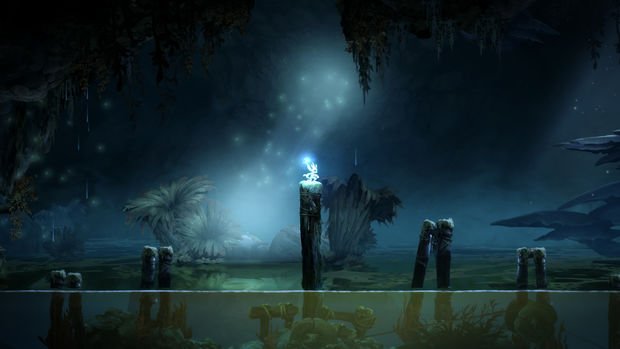 Like traversal, combat also moves quickly. Not long into the demo, Ori picks up a fairy-like friend, who acts as both adviser and weapon. It feels like a hybrid melee/ranged weapon, in that it has a fairly long range, but it does not act like a typical projectile. As a conscious entity, it locks onto enemies and environmental hazards, allowing the player to focus more on dodging enemy attacks than on aiming Ori’s own.

The fairy can even attack around corners if Ori is near enough to the target. This aim assist functionality may seem foreign to the more hardcore platform players, but it works well in Ori and the Blind Forest, because enemies can be just as fast as Ori. The player does not get to sit back and relax while the fairy does the work; the focus is merely shifted to defensive maneuvering.

Ori and the Blind Forestis not all about combat. TheLimboinfluence becomes clear with the introduction of basic puzzle platforming elements. Ori can grab and drag certain objects, moving platforms to progress forward or reveal secret areas. The puzzles in the demo were far from difficult, but the functionality is in place for a good repertoire. 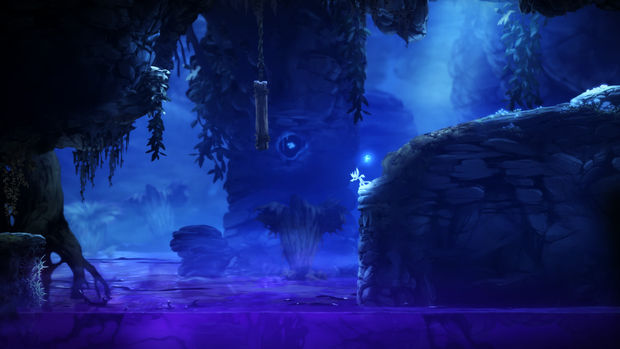 Though it draws inspiration from a lot of disparate titles,Ori is a metroidvania at its heart. Over the course of the 20 minute demo, I gained a few abilities that unlocked new areas to explore. The attack allows Ori to break certain barriers, and the wall jump opens up more vertical areas, as well as added platforming complexity.

Indeed, between ruthless enemies and precarious spike pits, Ori is a difficult game. To help mitigate that, it has functionality to save anywhere, but it is limited. The player can drop a save point anywhere, but must collect energy to recharge it before placing another. These save points also act as locations to spend experience to gain new abilities, so there is a bit of decision-making necessary after leveling up; there is a question whether one should drop a save point and gain a new ability immediately, or wait until the path ahead appears more treacherous and respawning nearby would be more useful.

Otherwise, Orihas a lot of the trappings that we have come to expect from a metroidvania. When asked, Daniel Smith carefully evaded the topic of sequence breaking, but he hinted that there could be rewards for those who speed run through or complete the game without dying. There certainly seems to be a lot to find here, and with its superb control and gorgeous art direction, Ori and the Blind Forest looks like it will be a joy to explore.