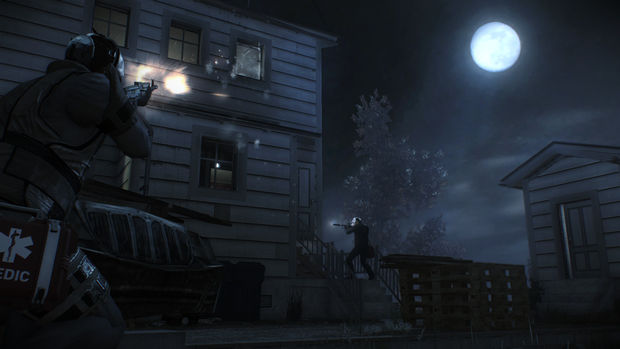 Payday 2 feels like one of the most ambitious sequels in recent memory. I was a fan of Payday: The Heist, which in and of itself is high praise. Normally I can’t be bothered to play online multiplayer and I’ve had first-person shooter fatigue for years, but Payday clicked with me. The focus on carefully orchestrated cooperation combined with the game’s sometimes vicious level of challenge against near overwhelming odds is exhilarating.

We knew Payday 2 was going to be much improved, given that it’s receiving a retail release in addition to digital, and we knew that new elements were going to be added, like stealth possibilities. Still, I wasn’t prepared for how much has improved. Talking to director David Goldfarb and then playing for myself left me pleasantly surprised and wanting to play more.

One of the big pieces of Payday 2‘s revamp is that heist jobs can be segmented into multiple days and tasks. Essentially, there is a focus on the lead up to jobs that feel more holistic. This way, the team could build, “long, complex heists without having to build five hour maps,” Goldfarb explained.

There is also a focus on making the natural economy useful and fruitful. Only portions of your take after heists can be spent immediately, much of it being funneled through off-shore accounts and other realistic feats of thievery. You can also use your wealth to purchase assets before jobs, like blueprints, and even sniper support. Talk about turned tables — I have so many recollections of tons of sniper sights flitting around in Payday: The Heist, sights trained directly on me and my crew.

There is also a mind bogglingly extensive upgrade, customization, and class system. The Mastermind, Technician, Enforcer, and Ghost all have huge skill trees full of some wild perks, like the ability to recruit law enforcement to your side, or a “Stockholm syndrome” perk that makes civilians see that maybe you’re actually a pretty cool guy and that the cops are jerks. There’s even a “Kilmer” perk, one of many nods to Michael Mann’s Heat. Goldfarb noted that the Mastermind is essentially based on DeNiro’s character in Heat. 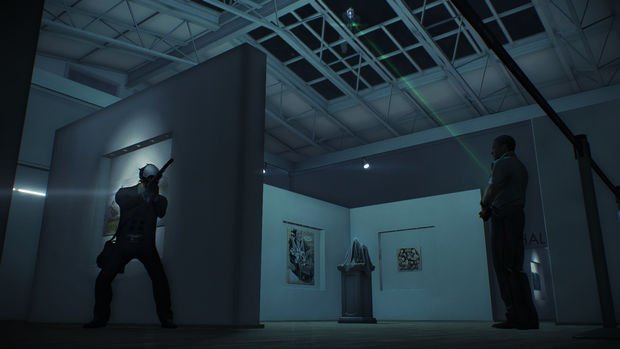 Beyond that, I saw a ridiculous collection of weapons and other customizables. There are a load of new unlockable masks and masks can be decorated, colored, painted, and textured. Given that everything appears visibly on your character in-game, the customization stands out even more.

Stealth is another cool possibility. In the bank heist I played, we were able to run around back and slip in through a lock picked back door, despite being a somewhat uncoordinated and unacquainted bunch. The latter did hurt us when someone — if anyone tells you it was me, I assure you they lie — accidentally fired a shot and ruined the entire thing. “Stealth will be difficult in pickup games,” Goldfarb explained, noting that most peoples’ attempts at stealth thus far had gone even more horribly wrong than ours (and usually more quickly).

According to Goldfarb, some jobs are practically impossible to stealth — though I’m sure that won’t stop people from trying. If you’re skilled enough, you can apparently push the stealth element surprisingly far into most jobs, though the game will be just as taut and enjoyable when things go horribly wrong, as capers are apt to do.

All told, the game has 30 missions. Add in difficulty levels and certain elements of randomization — if you botch jobs badly enough, you can trigger various, randomized escape segments, for example — and you’re bound to get a lot of play out of Payday 2.

Goldfarb noted that Dark Souls is a huge influence on the game, going as far as to call Payday 2 something of an homage. Anyone who has played the original on its highest difficulty — or, hell, even on the “normal” difficulty — can attest to that. Maybe that’s why I love it. The game wants to beat you into the earth and has the means to do so. When you play long enough, after level 50, the game offers professional missions in which you have to successfully complete each part of multi-day jobs in sequence or be sent back to the very beginning. 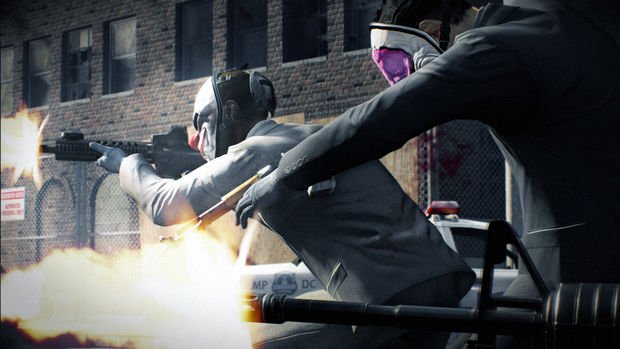 Beyond adding new features, the game itself is much improved over the original. Guns have been entirely retooled to feel different and the visuals have been ratcheted up. During the heist I played, we had the ability to plank up windows, which is one of many neat additions to the game. Far and away, my favorite touch was that picking up a money-filled duffel bag actually tilts the camera sideways as if the bag were on your shoulder, weighing you down. It’s a fabulous little touch that immediately made me feel like I was in the climax of Heat, watching Tom Sizemore ineffectually trying to heft duffel bags through vacated streets.