Picking up houses and riding butterflies in SCALE

Giving a new meaning to the phrase ‘scale up a mountain’

Aside from the conversation that Jonathan had with developer Steve Swink, we haven’t done much to coverSCALE. Fortunately, the Phoenix area indie game developer group Game CoLab put together an event at the Phoenix Art Museum this past weekend, and the ingenious first-person puzzle platformer was one of the highlights.

That description of Scale may invoke thoughts of Portal or Quantum Conundrum, and those comparisons wouldn’t be completely off base, but after some time with the game, I couldn’t shake the feeling that it is more like Super Mario 64 than anything else. At least, it’s like Super Mario 64, except you have a gun that can grow and shrink objects in the environment at will. 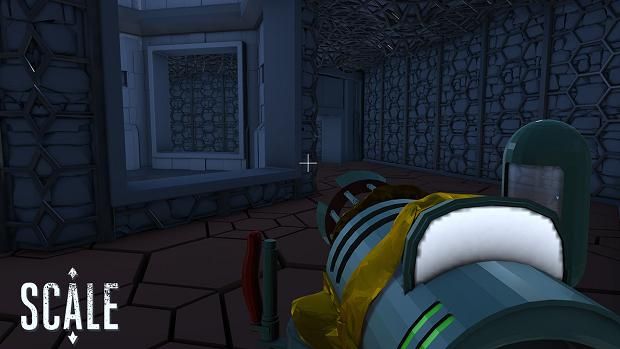 The centerpiece of SCALEis its scale gun, which has the ability to manipulate nearby objects by increasing or decreasing their sizes. The brief tutorial of the demo takes place in a dingy stone building, and introduces the concept with a pressure plate and a handful of weights that need to be placed on top of it in order to continue. The weights themselves are too heavy to carry, so they must first be scaled down to a more manageable size. Once they are stacked on top of the pressure plate, they must then be scaled up in order to provide enough weight to activate it.

Once the basic idea of using the scale gun to grow and shrink things has been shown, the player enters a courtyard with a single flower in it. After standing on top of the flower and scaling it up to the size of a nearby wall, the rest of the area is revealed, more colorful and inviting than the tutorial dungeon. Objectives are also provided: find and collect the silver dodecahedra called particles hidden around the environment with only a few words as hints to where (and more importantly, how) a particle can be found and collected.

This is where SCALE starts to feel like Super Mario 64. Players are placed into an environment that can be explored freely, with all of the particles available to be found at once, but one is highlighted by the hint and starting position. For instance, one of the particles requires the player to stand on an angled column and scale it up quickly such that it launches him across a gap filled with spikes and onto a platform containing the desired particle. However, instead of doing that, the player could scale the spikes down to where they are not a threat, walk on the platform where they were, and find a different particle hidden down there. 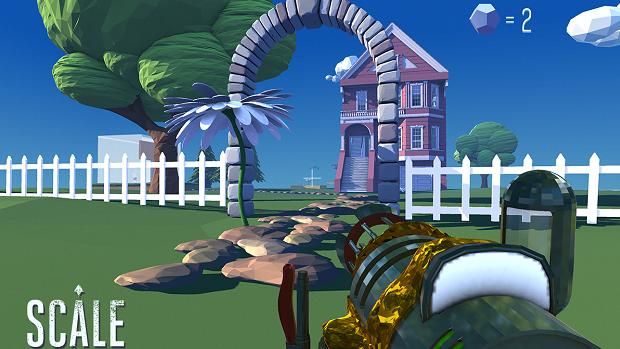 Other particles would be much more difficult to find without the hint given at the start of each outing. One such hint said something to the effect of “Inside the treasure chest,” and without it, I wouldn’t have spent as much time wracking my brain trying to find a way to open it. After giving up and impaling myself on some spikes, I watched another player discover the solution: set the chest on its back, stand on top of it, scale it up to the size of a house, and then jump down through the keyhole into it.

Another delightful moment began with the hint “House-ception.” The level starts with a toy house in front of the player and not much else. After scaling the house up to normal proportions and entering it, another toy house can be found inside of it. By taking that house outside and scaling it up, the player finally finds a chest locked by a pressure plate. With nothing else to weigh the plate down, the first house must be scaled back down and brought into the second, making the particle available for collection.

Even in the short amount of time I was able to spend with it, there were several more memorable moments in SCALE. The idea itself is unique, and if it continues to deliver new ways to play with the central mechanic throughout the experience, it could end up being a truly great puzzle platformer.