Even though I wasn’t optimistic about the prospect, I wanted to put my best foot forward. With a cheery tone to my voice, I affirmed the stranger’s request to play Project Totem cooperatively with me. The entire meeting he had seemed so eager, feverishly scribbling down notes as the Press Play developers explained their unabashedly simple, yet deviously difficult game. I was the one playing and talking, but he probably deserved a shot too, right?

“Damnit, he’s going to suck, and it’s going to piss me off,” I thought.

And, I was right. Well, sort of. Project Totem’s co-op play is designed in such a way that you’ll probably come to this conclusion about your partner regardless of their skill set. Failures by me? Temporary miscue, sure to never happen again. Failures by him? Does this dolt even have opposable thumbs, or does he simply mash the controller against his forehead? 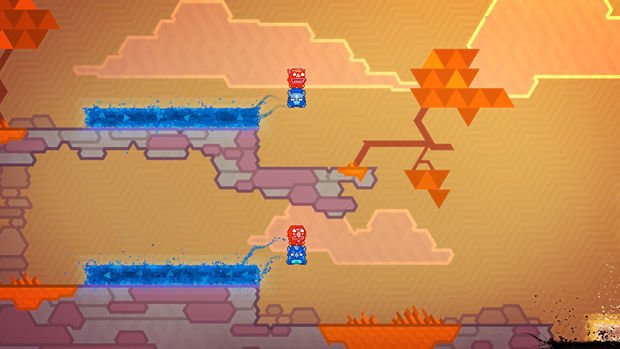 The sentiment fades quickly though as Project Totem — which will launch on Xbox One, and likely later on other platforms such as Xbox 360 and PC — immediately erases any memory of missteps as it teleports you back to the previous checkpoint seamlessly. No waiting. No time to let the frustration manifest. Just another instantaneous go at it. Maybe we’re one step closer to figuring out the required actions to solve that puzzle. Maybe he’s going to fall into a pit again.

Project Totem takes its crafty design and amplifies everything for multiplayer. Solo play is packed with situations where you die and throw your head back with a grim grin on your face. Taking care of two of the adorable little totem guys is work enough. Having four on-screen and cooperatively keeping track of the two you’re responsible for and ensuring that your partner has control of his own makes for a more hectic experience — even if the design is almost the exact same.

Cooperative play in Project Totem draws from the mechanics of single-player. Stack your totems, figure out puzzles, flex your platforming muscle, and do it all as quick as you can. However, it’s simultaneously more flexible and more rigid. Certain elements are gone, such as the ability to switch totems with the X button. However, doubling the number of totems opens up a world of possibilities to solve puzzles different ways. Well, the solutions generally remain constant, but you and your partner might find unique ways to come to that end. 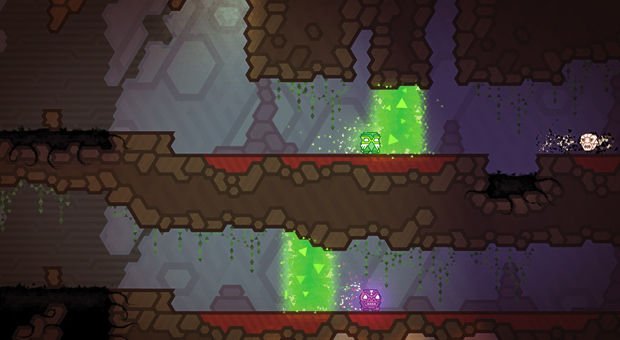 Press Play has a familiar and relatable experience to draw from with its approach to multiplayer. The lead developers are brothers, naturally putting in a wealth of time in their youth playing games together. As such, and maybe in an effort to recapture that experience, Project Totem will only contain local co-op play — the intimate experience of being next to someone and working through a level together. I asked whether there will be some sort of countdown timer to assist the coordination of maneuvers, a la ‘Splosion Man. I was firmly told that I can just count with my mouth. They were right; it worked flawlessly.

When digging a bit into the developers’ childhood experiences, I prompted as to which was fortunate enough as a child to be first player. One regretfully resigned that he was most often relegated to playing as Luigi. However, Luigi is nothing to scoff at. It’s not like one of the plumber siblings has an advantage over the other. Actually, Mario and Luigi is an apt comparison for Project Totem. Both players have identical abilities, and the only thing that might provide any differentiation is platforming skill.

But, it’s that platforming skill that’s likely to cause a constant rift between you and someone else in your living room. A team that’s on the same page will function as a well-oiled machine, probably breezing through levels with little trouble. All others will need to hold onto the successes, because failures will come more often than not. Just remember that it’s always the other guy’s fault.